Boxes full of air and other tragedies

Do we have a thread for complaints about material? We don’t want to have the nice threads like Boxes that feel right or Show us your bits messed up with our ridiculing of boxes full of air.

Here I have a pair of great examples to start this: 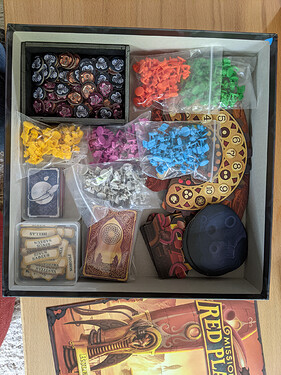 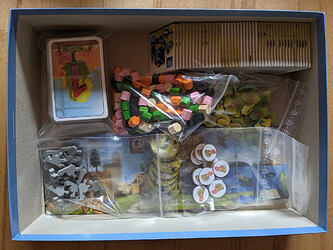 Lanterns, it really is frustrating. Apart from the rulebook, everything would fix easily to the box of Felicity
… 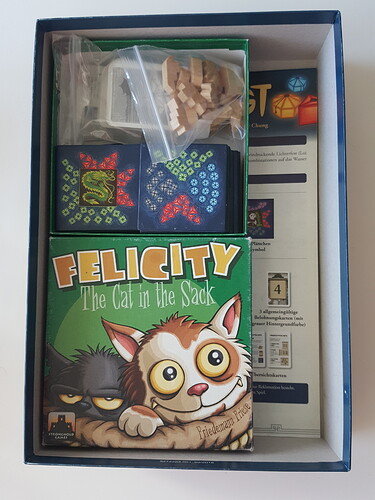 I’m trying to remember which expansion it was that came in an A4-ish 4cm-ish sort of box and contained just one deck of cards.

The first example of this for me was Splendor. 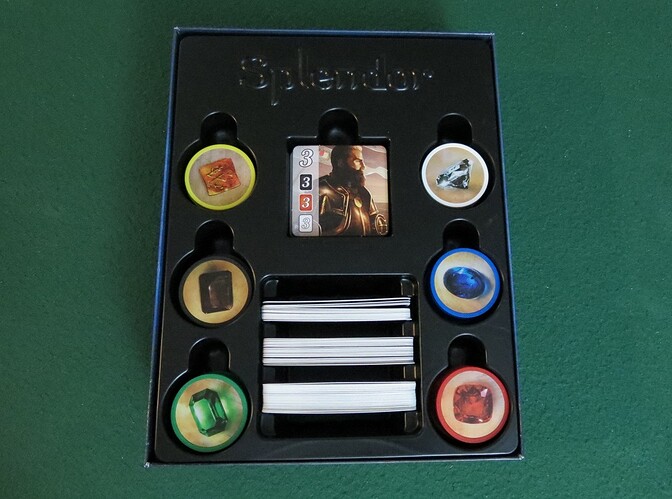 My improved one takes up ¼ the volume, though admittedly doesn’t fit the rulebook. 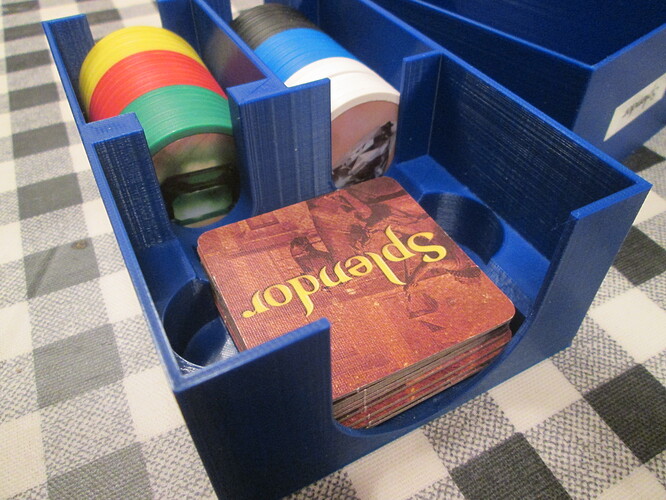 (Weirdly, since I bought Cities of Splendor I haven’t played even the base game.)

Colony is a bit weird this way. Here’s a picture from eBay: 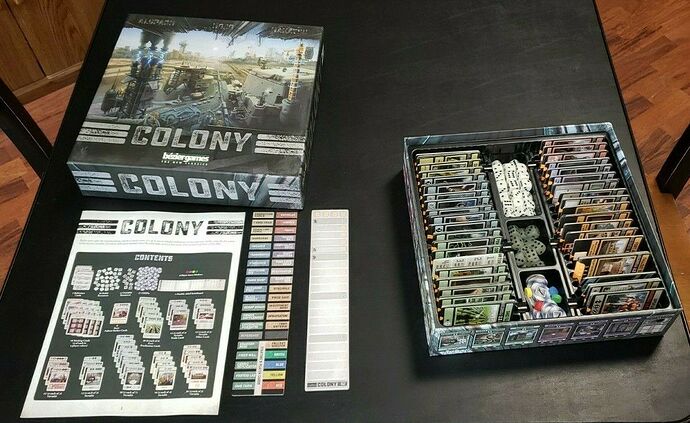 Now I can accept that the card-tray style is useful given that for any single game you’ll be pulling cards out of slots to create the custom setup for that game, but even so, I can’t help thinking that three playing-card cases plus something to hold the dice would make a lovely small-box game. (I’ve sold my copy so I won’t be doing it.)

(In the latest podcast we talked about game prices, and Ren Multimäki reckons it’s definitely still the case that shelving size really matters – if your game is in a small box, the shop puts it on the Small Box Shelf and people complain that it doesn’t cost £10-15 like the other small box games. Personally I’m surprised that face-to-face retail is still so important.)

I’m fairly agnostic on these matters. Quacks (OG box) was ridiculous for box size, but now is crammed with coin capsules and both expansions. Cosmic Encounter even more so, with its six or seven expansions!

I’d have huge issues if every box size was perfect tailored for its contents. Shelf space would become even more of an issue with every expansion needing space too.

I’d probably go as far to say the only size that really matters is the box depth (controversial I know!). I would love more games in Pax Pamir 2e size boxes, but board size is always going to be the limiting factor for that size.

I’d 100% agree. Three Kingdoms Redux is my favourite to prove it. The area of the top was a normal TTR size however at around 2cm deep it was packed tight. If all manufacturers opted for this style we’d be good. Splendor fails on all accounts. Awkward in every dimension. Wider and thinner would be much better. 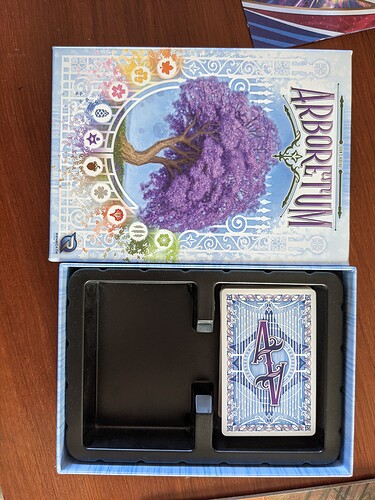 But the cover is soooo pretty … yes though. And making the cards bigger is not an option due to table space requirements…

1066: Tears to Many Mothers. Don’t have a picture to illustrate it, but my word, there’s a lot of empty space in that box… 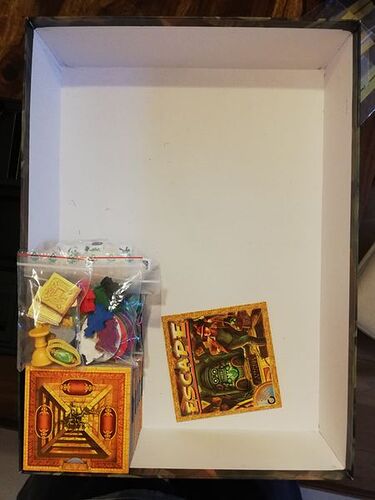 I think this is the worst I’ve ever seen.

I filled it up with six dice trays, and still cut the box in half.

What gets me is that the Z-Man box was perfectly sized! And the rulebook and scorepad in the new version aren’t sized to fit the box?? It’s just ridiculous. 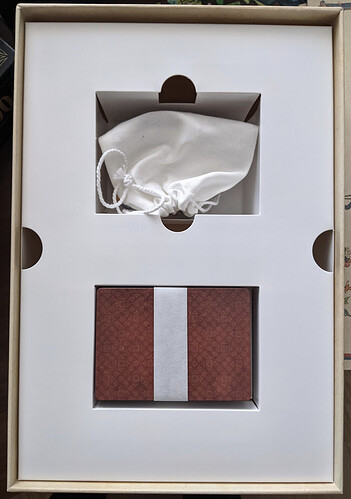 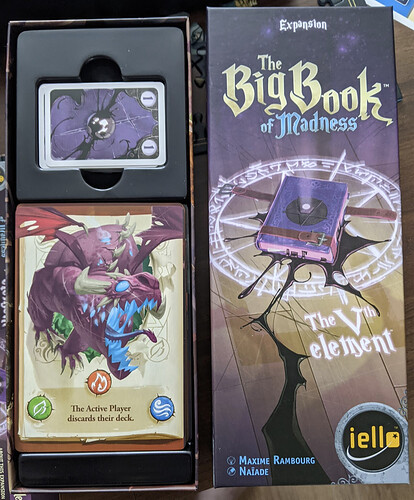 The new Big Book of Madness expansion. There’s actually a slot under the bigger cards that perfectly fits the little cards!!

“Oh,” I thought to myself, “it’s so it stands nicely alongside the base box.” Nope. It’s not the same height or depth as the base game. It’s just bizarrely shaped for no reason.

A War of Whispers just taunting you for not getting the deluxe version. Empty space is annoying, but a special slot for something you don’t have? Infuriating.

I’m on the verge of selling it, just because the box annoys me so much

I’m on the verge of selling it, just because the box annoys me so much

Myself, I ended up buying a second-hand copy of the first edition which, to me, is a more attractive version of the game in virtually every way.

The box is thinner isn’t it? I can’t imagine using the expansion cards for a long time.

I’d love a cloth board for the King is Dead to make the whole thing smaller. There’s nothing there that needs to be high fidelity, and cloth feels quite thematic for the time period and type of strategizing.

The box is thinner isn’t it?

(BGG has incorrect numbers for the 2nd edition – it claims 5cm for that box, but I measured it as 7cm.)

I can’t imagine using the expansion cards for a long time.

Yeah, I was pretty convinced that I’d never use them, so getting the per-player colour-coded sets of cards in exchange was a good trade-off for me.

I’d love a cloth board for the King is Dead to make the whole thing smaller. There’s nothing there that needs to be high fidelity, and cloth feels quite thematic for the time period and type of strategizing.

That might be ideal. The game could be packed into a really small form factor with a cloth map, and I think it could look really nice.

I heard from a friend who backed is that the designer intentionally enlarged the box as a way to justify to your average board game consumers that it cost 30-40 quid or so.

I dont blame him. Ask any retail worker on their opinion of people as consumers.

Don’t get me wrong, I enjoy the game and love the artwork, and I don’t mind what I paid for it, but it is a bit of an unnecessary shelf-hog. I can chuck in my over-sized box for the reprinted Medieval version of Battle Line, and still have plenty of space.

The sort of person who’s likely to be showing great discernment and good taste by reading and posting here probably has quite a few games and cares about how much space they take up. But we’re certainly a minority among game buyers.

But even before my shelves were overflowing I felt hard done by when a big box turned out to hold a small game. It’s a sense of excitement at tearing open the package of infinite possibilities, immediately doused by “is that all there is”. Even the hypothetical customer who buys a €40 game in a big box is surely going to get it home, open it, and wonder “why was that box so big for just two decks of cards?”. Aren’t they?