Where on Earth are you!? Show us the sights from your part of the world

Yeah, the UK gets not enough snow to invest in proper anti-snow measures.

As a result it took me 90 minutes to do my 35 minute commute today.

I spent a little bit of time in the american south, which also doesn’t not often get snow. when it does, stuff shuts down. When I was in Durham, we got maybe 4 cm of snow. I went to drive to work, got to the main road, and saw it was backed up for at least a mile. I turned around, grabbed a bike, and rode. Got lots of ‘what’s that nutto doing’; getting to work in about the usual time, duh.

I’ve lived and visited a number of different places (not that many, really) and there’s generally a vibe for how each area handles snow on the road.

When I lived in the rural area south of Topeka, Kansas as a teenager, most people could get around just fine and everyone took their time, but there weren’t enough cars to ever snarl-up traffic. If you were going into Topeka, though, that would certainly slow down to effectively nothing; the further you went into town, the slower it would go – up to and including 0mph (that’s 0kph for you non-USians).

When I moved to Lawrence, Kansas, I found a much different vibe; I never really left the center of the (very small) town; I don’t know if the city had snow plows (I certainly never saw them except on the 4 main roads through town, they may have been borrowed from the county just for clearing bus routes for all I know). It would snow and after a week or so it would just be really packed down snow. Still, it was a very chill little college town, so everyone just kind of slide down the road, sideways sometimes. If you got in a fender-bender, the police cruiser would slide up next to you, make sure everyone was okay and make sure everyone got their insurance details exchanged, and then everyone would slide on their way.

Then I moved to Denver, Colorado. Nobody in Denver is from Colorado; they’re all from California or Texas (and, at least, while I was there, there was at least 1 person from Kansas). As a result, nobody in Denver knows how to drive in the snow. Fortunately, the climate is arid enough that even if it does snow, most of the time the sun will come out and it’ll be gone by noon. In the winter, I would leave my house in a winter coat and by the time I got to work I would have already changed into a light jacket. The one time I got caught out in mid-day snow was awful and it took me 6 hours to get home on a trip that would normally take 25 minutes (that was the day I jumped across the hood of a car to avoid the school bus that was sliding down an ice-covered hill sideways).

I once visited the Dallas and Fort Worth area of Texas around Christmas time and they were predicting “snow” so the grocery stores closed early (with their shelves already ransacked) and gas stations ran out of fuel because between the hours of 8pm and 9pm, a small amount of snow fell, so little that it didn’t even turn the street white.

Here where I live now… if there’s snow on the ground, people just act like they’ve never driven before, or at the very least, with the suspicion that the snow has altered the street layouts.

I lived for 16 years in the UK. Coming from a place where I only saw snow in the mountains once a year (and never went to, because of the traffic jam to try to get to it), to the point that my first time driving in the UK (on the other side of the road) was in a snowfall in Leeds. I arrived to the hotel just fine. It was actually fun! (although I kept not finding the rear view mirror or banging my hand against the door when looking for the gearstick to change gears, but that’s nothing to do with snow)

Then I had years of the odd winter where people abused the “it’s snowing and I live at the top of a hill, so I will stay home” while living in the Midlands; one year after having just moved to the “warmer” South West the council ran out of road grit by early December, we had the three worse winters for snow while I lived there; then the famous Beast from the East hit in March 2018, so it was all sorts of funny experiences.

I had loads of colleagues from Central and Eastern Europe that would not believe how unprepared the UK (at least England) was for snow. But then again, even though being famous for its bad weather, it rarely snows more than 5 cm (screw you, Imperial System, I talk in metric), so why would you bother overpreparing for something that could collapse the country once every three years…?

But then again, even though being famous for its bad weather, it rarely snows more than 5 cm (screw you, Imperial System, I talk in metric), so why would you bother overpreparing for something that could collapse the country once every three years…?

Britain. Where everything is a surprise (c) 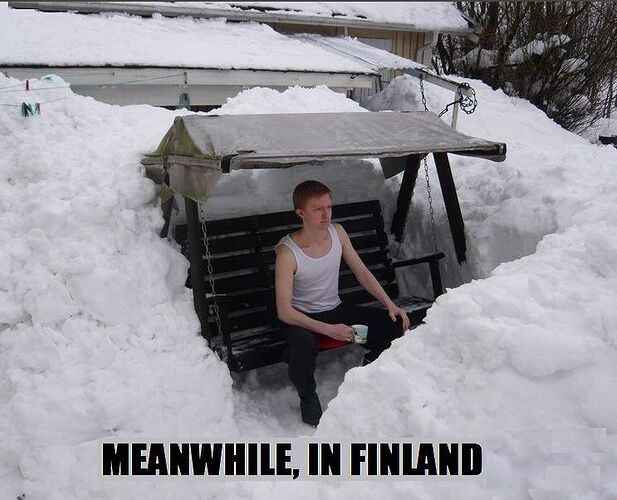 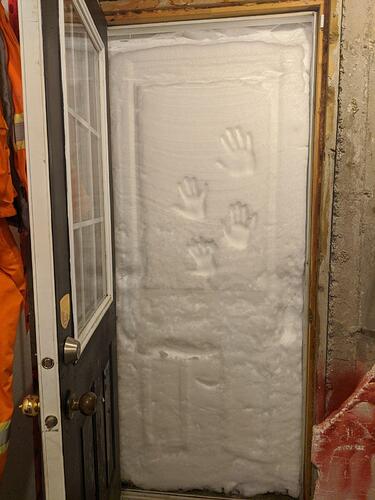 Southern Germany generally gets enough snow that we switch between summer and winter tires. My city cleans away the slightest bit of snow almost instantly? Since we only get snow a couple times a year and only every 10 years more than a few cm… people tend to not drive that well. What I hate is that people do not clean snow from their cards and then drive with hazardous amounts of snow on the roof.

It is snowing a bit right now… but I don’t think it is going to do anything relevant to the roads.

why would you bother overpreparing for something that could collapse the country once every three years…?

Because these days every year has a few snowy days, so 2-3cm should be “we expect this and know what to do” territory.

Then I had years of the odd winter where people abused the “it’s snowing and I live at the top of a hill, so I will stay home” while living in the Midlands;

Whereabouts in the Midlands? I used to live on top of a hill in Matlock - just used to walk everywhere. Calves of steel walking up and down those hills all the time!

You’ve just described 90% of the houses in Matlock.

Thats true! But I was right at the top, heading out towards Chesterfield

Whereabouts in the Midlands?

Three years in Stoke on Trent and three and a half years next to the University in Nottingham.

My city cleans away the slightest bit of snow almost instantly?

But you’re in a proper organised country, that shouldn’t count! 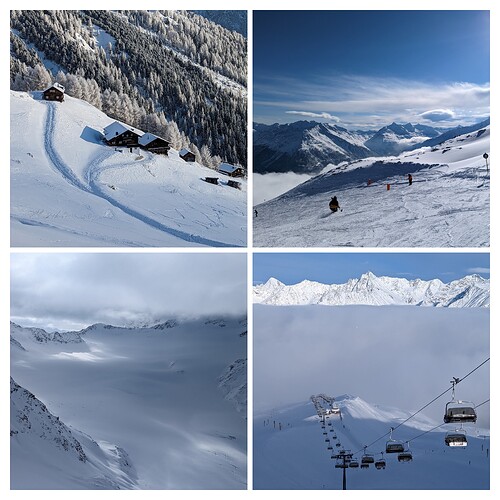 Greetings from the Alps

We had a very good first day of skiing especially because we decided just before noon to make our way up to the glaciers: in the lower parts it snowed all day (with good visibility but still). The lower parts being around 2000m above sea level. The glaciers go up to 3300m.

Talking about driving: it was snowing while we were driving here. 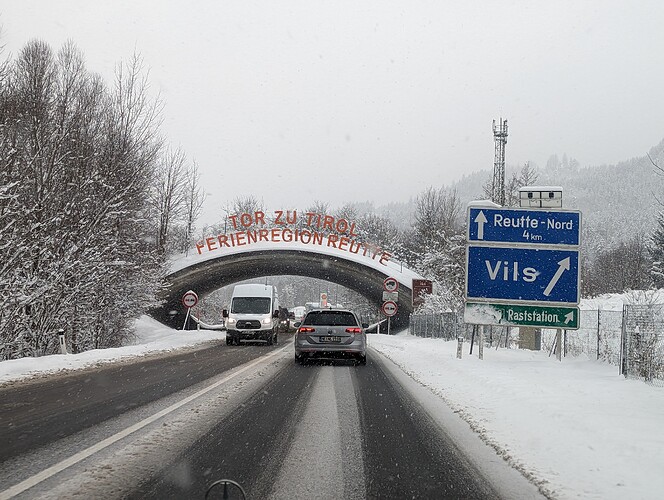 It snowed enough it was on the Autobahn… this is just after the Austrian border. We had to drive Fernpass walking tempo because too many drivers couldn‘t deal. It cost us 2 hours which meant by the time we arrived it was dark and the road up to the village had snowed in … that road is really scaring me every time we come here. We ended up having to put on the chains for the last 100m because it gets too steep. We should have taken up my dad‘s offer of taking his 4wd—but it is a huge Diesel car and it would have been much safer going up the mountains. We almost hit the second deer that crossed the road…

We usually switch to winter tires in November but our schedule was disrupted by the pandemic. Additionally, since we now both work from home and I do most local stuff by bike our car has not been in use much recently. So we‘ve neglected to schedule this earlier.