Photos of our pets 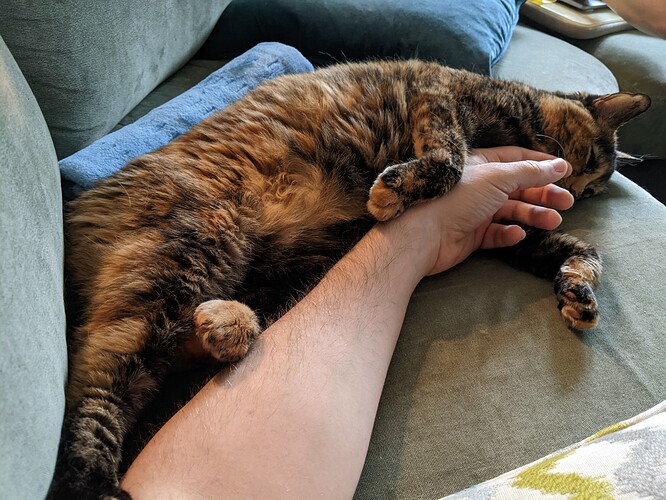 We have a sweet new addition to our family. Presented below is Apollo, first snuggling up to his sister. Apollo on the way to get the snip, immediately after the snip, and then being comforted by his sister once it all sank in. 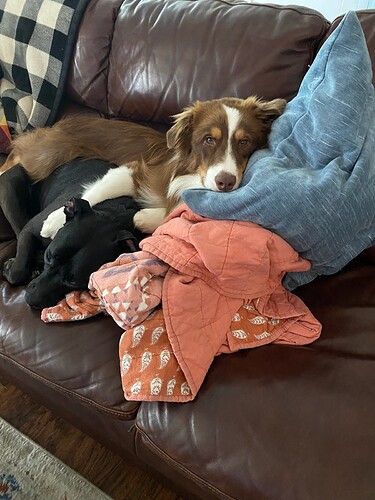 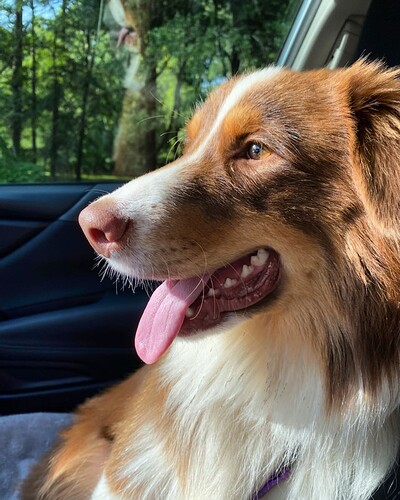 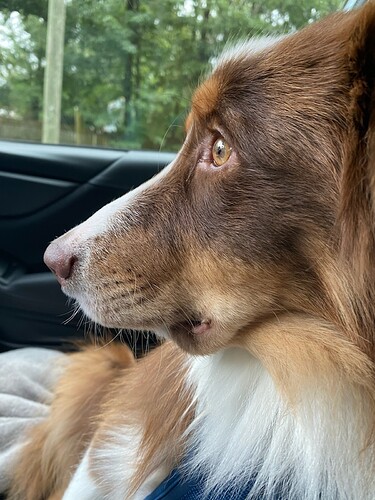 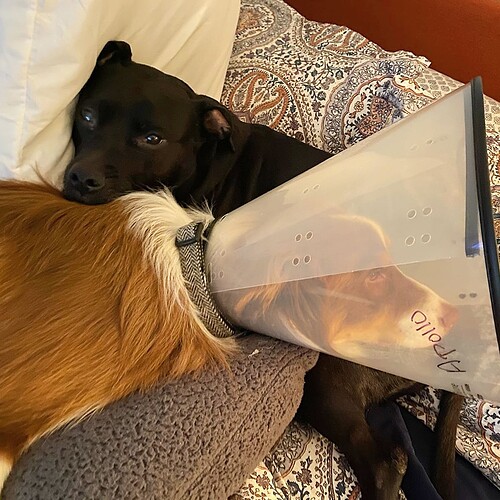 What a fine dog! And what a sweet sister. What’s her name? (apologies if I’m forgetful or you don’t want to say)
ETA: I think Apollo has found a pretty fine family to add himself to. Good fortune be with you all. But resist keeping cattle, even if he swears he will look after them himself…

She’s named after Tali from Mass effect. Truthfully, he’s more taken with her than us and gets jealous if she shows us too much attention.

Not even a a little bit of cattle?

immediately after the snip

Well that face is heartbreaking. I hope you feel better soon, Apollo!

Well that face is heartbreaking. I hope you feel better soon, Apollo! 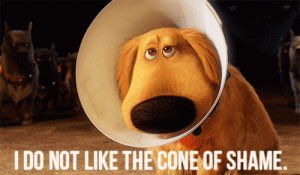 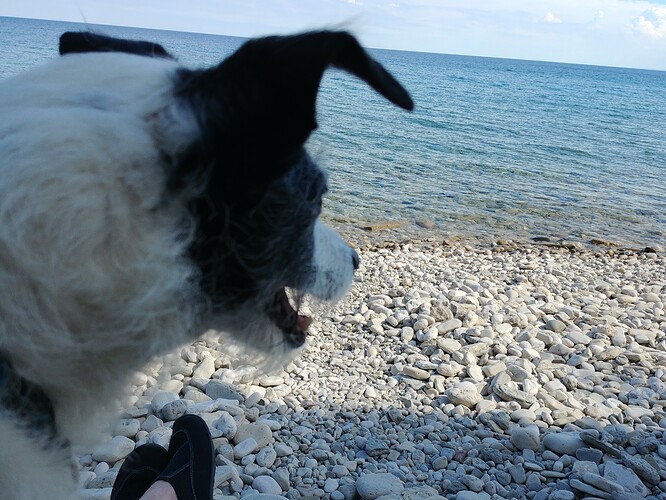 There is no thread for reviews of the last game you played with a photo of your pet showing your part of the world.

The cottage we rented has some crafts, puzzles and games so my wife got out Monopoly Junior. We had a three player game with her rolling for herself and Peter the terrier. I was curious to see how it had been streamlined. Peter lost, not just because he slept through it or that he is a dog but it is all luck. The only mitigation you might do is not buy properties right away. In this case you are placing ticket booths on amusement park rides. Since you really should play thematically we all placed booths as soon as we could. Player elimination is not an issue. When Peter ran out of cash that ended the game. I won. IN YOUR SCRUFFY FACE, NAPPING DOG!
The player pieces are different colours but all the same car shape. I was thinking this could simplify rivalry over the pieces but sometimes even adults fight over their colour. Another simplification is that purchase prices and rental prices are the same. The very popular house rule about winning the cash on (the equivalent of) the Free Parking space is an official part of this version. Certain Chance cards speed up the game by making it easier to place ticket booths. The fact that you are rolling one die only means you are not rushing past as many spaces. The cynic in me feels it is a gateway game specifically for Monopoly but it was colourful and fun so I should SU&SD.
A last odd detail is that someone felt they should redact a line in the rules by hand with a black magic marker. I was wondering who would do that to a copy that wasn’t theirs when my wife reminded me of the French rules. The hidden line was about how the person acting as banker could also play if they kept their cash clearly separate. Was that controversial for someone?

No Monopoly on cheer.

Speaking of monopoly, I was at my local habitat for humanity restore today, and saw this rather unexpected display: 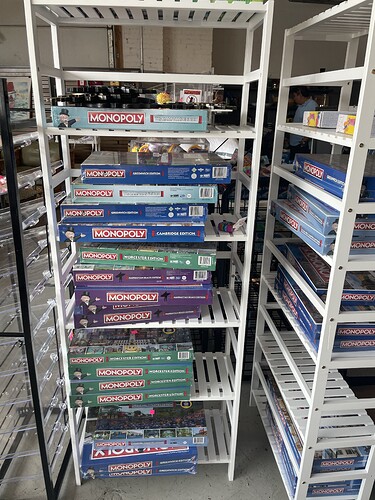 (Habitat for humanity is a house building charity; restore are their resale shops. Mostly they have salvaged uilding materials, appliances and furniture…)

FWIW I have heard good things about Monopoly Deal (but not tried it myself).

My cat died a few weeks ago. We’re going to get a new cat (or two…) probably after Christmas so be prepared for catspam.

That happened to us this year. My opinion - get the new cats asap. Cheered everyone up who were missing our 18 year old Jasmine. 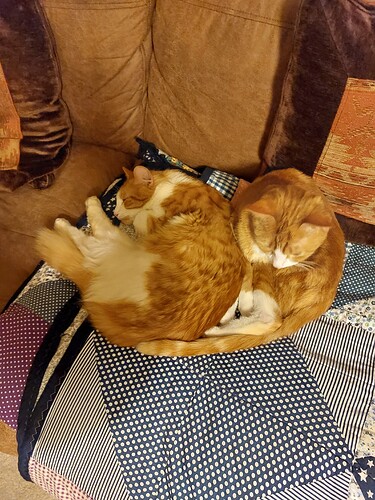 So cute. And with our most recent pairs being Westley & Walter and now Marlowe & Morse, I’m appreciating the alliteration : )

I wouldn’t have been able to rush into adopting anyone new after W&W had died, though (and nor with their predecessor). Do what feels right to you of course; but I completely understand needing quite a while to come to terms with the loss before considering bringing new furry friends into the fold.

We were going to but we know we’re away or have people over several times over the next few months so thought that might not be the best time to get a new cat settled. Especially when they are going to have to cope with 2 small kids and a dog!

Our new couch was delivered today. It took Gwen about 5 minutes to settle in. 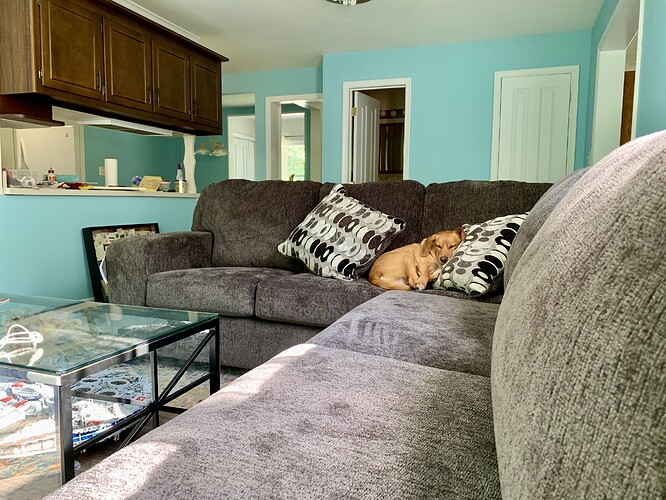 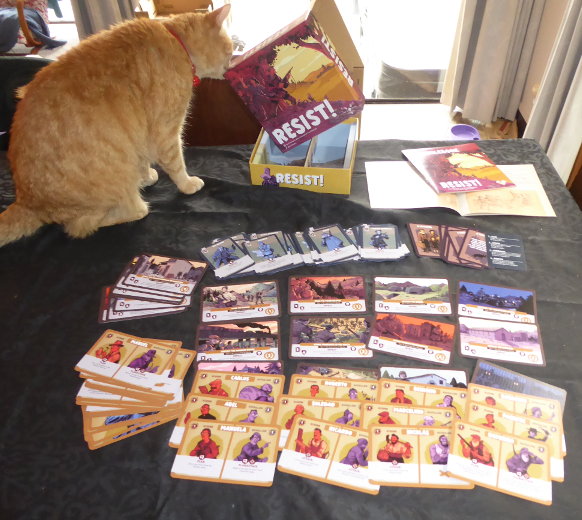 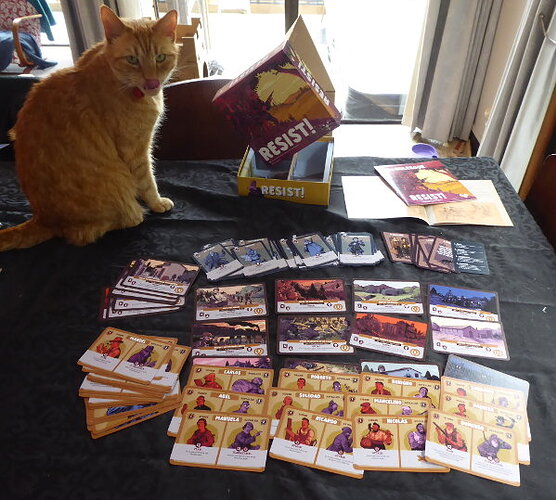 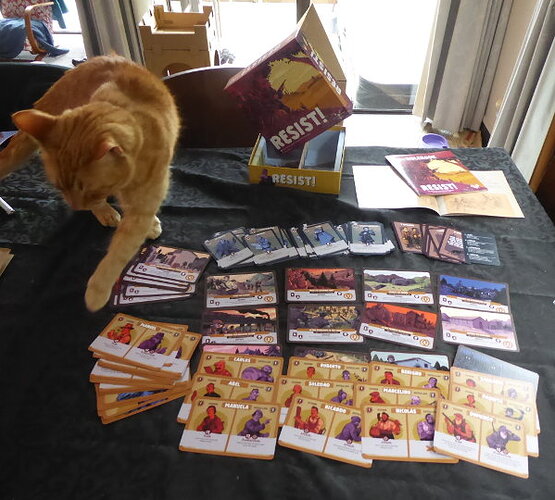 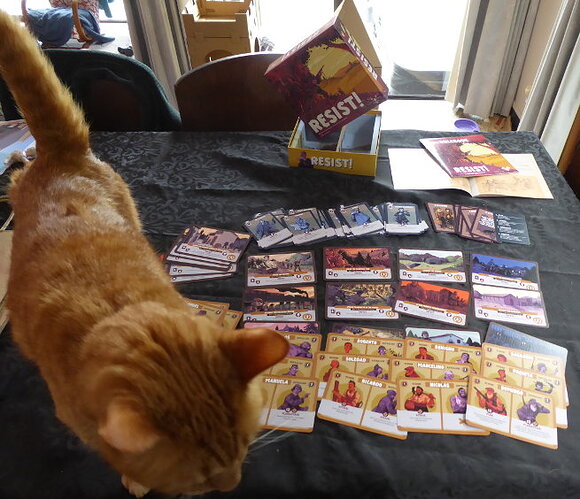 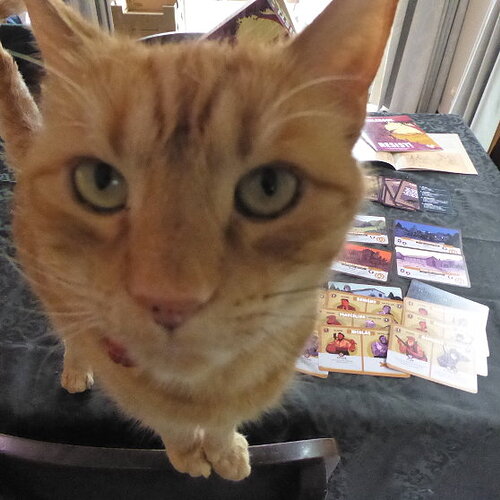 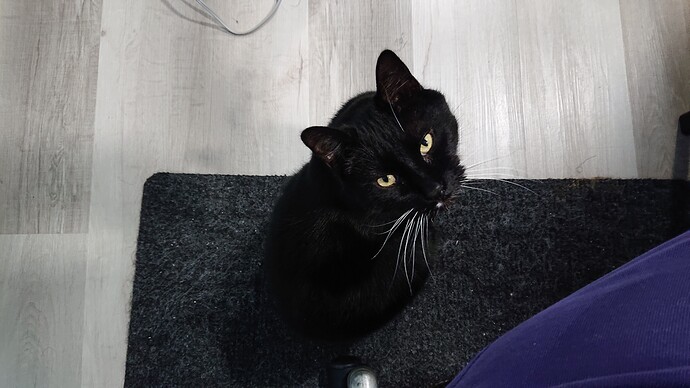 I bought a big basket to put at the end of the chaise lounge portion of our sectional to hold blankets for the couch. Gwen is under the impression I bought her a comfy new bed. 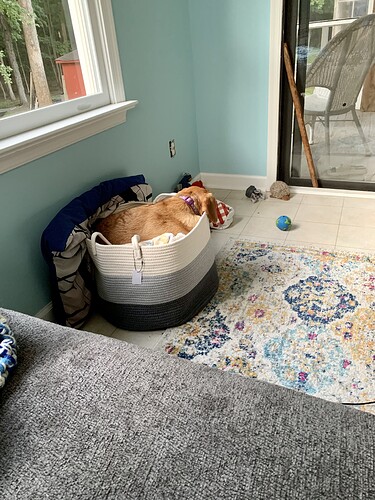 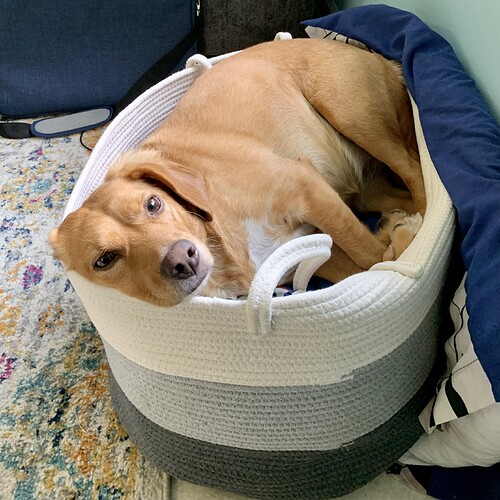 That’s a lovely dog bed. A bit deep, but doggo seems to have forgiven you