Photos of our pets

Continuing the discussion from Where on Earth are you!? Show us the sights from your part of the world:

Where on Earth are you!? Show us the sights from your part of the world

That’s beautiful and all, truly, but…

WHERE IS THE DOG?? 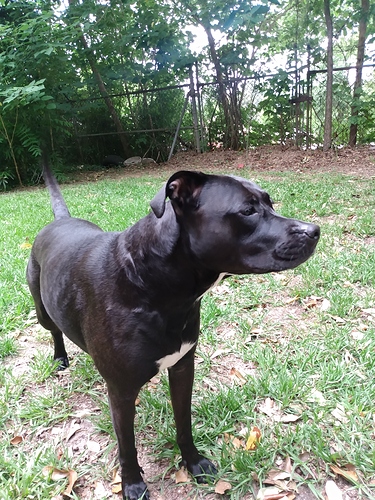 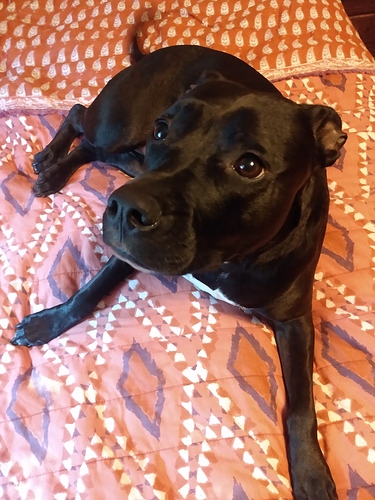 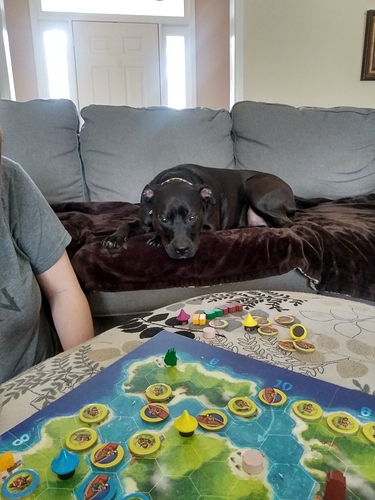 I have to continue the black and white pup streak we have going!! This is Sherlock 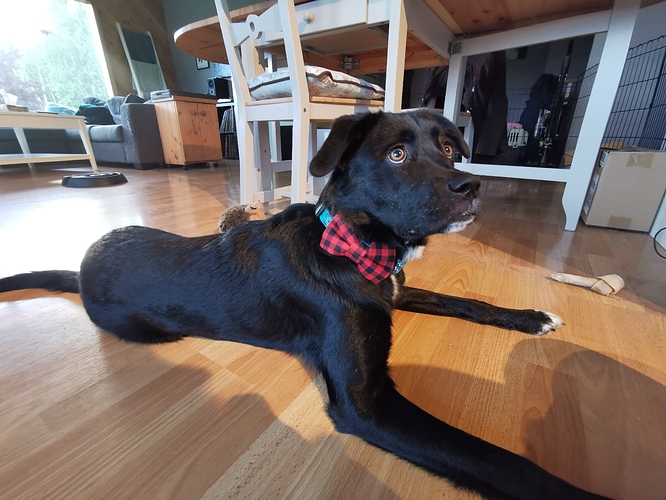 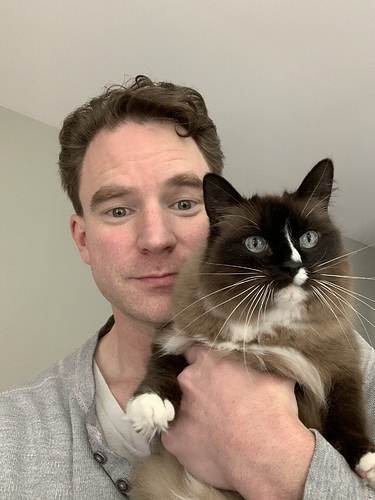 This is Lily. The ragdoll cat. Purely decorative and patient beyond all reason with a six year old. Even during lockdown. 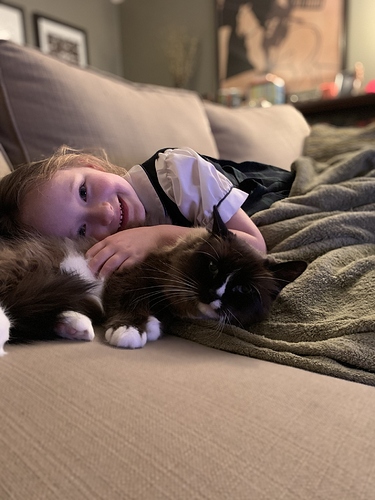 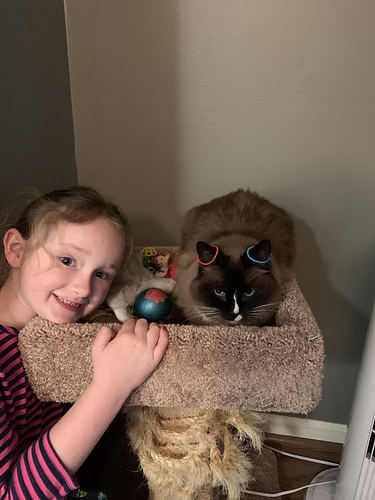 What a lovely thread. Admins, ladies and gentleman though: pleased be advised that I shall be adding quite a few pics of my own current and former cats later today when I get home from work. My apartment has literally become a shelter for feral, poorly and abandoned cats: I have eight indoors with me currently and another eight have stayed with me over the last five years, all found or adopted from my best friend’s garden. 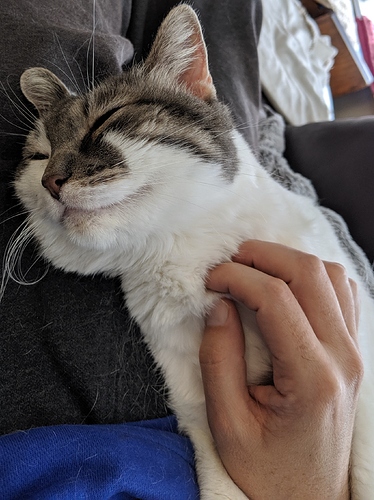 This is Cherry. She’s a very, very good girl.

Well, okay, this is Macavity, who is not at all a mystery cat: 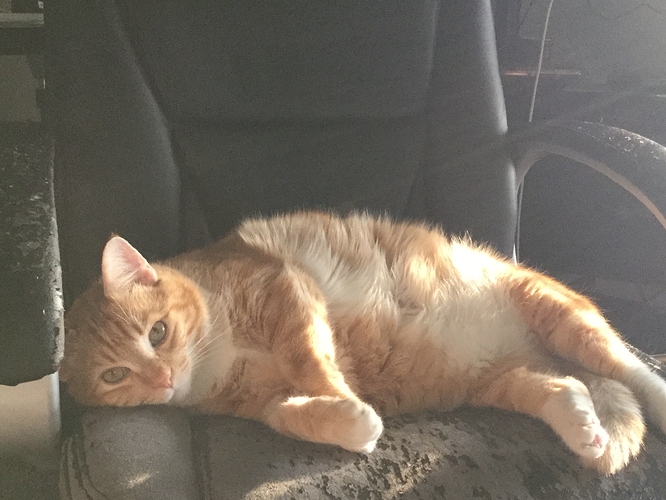 (C named him that because he’s a ginger, but really he has a cherubic personality. It was our previous cat, Taiki, who was the sinister mastermind of the cat world.)

Right now it’s early morning, and comparatively cool, and Macavity gets fed in another forty minutes. He’s chasing his rattly toy mouse all over the living room. The move to Kansas seems to have been really good for him . . .

Heeeeere’s Pomegranate! She’s a cat who knows what she wants. Whenever she wakes up from a nap she’ll yell until she’s gotten one of our attention, then she’ll flop down in the middle of the floor so we can pet her and rub her belly. 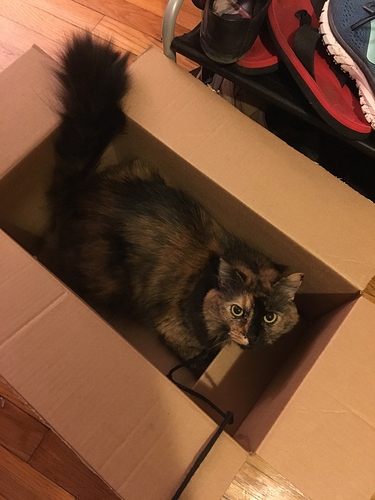 She also has coloration that makes it impossible to take a picture of her sleeping that doesn’t look like a jumbled mess. How many limbs does she have? Don’t know. 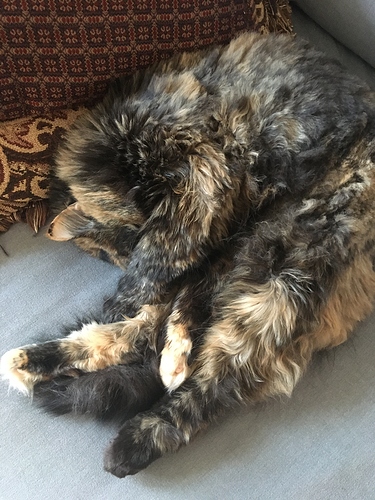 This is Totoro. She loves a lap 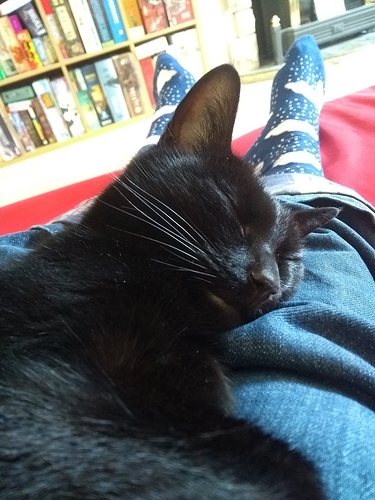 The family dog, she sadly went suddenly blind recently (during a walk) but quickly adjusted. 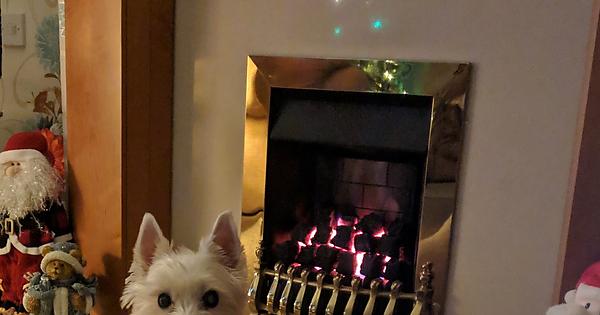 Introducing my current octet - although the youngest two are likely to be put up for adopting shortly now that the lockdown is easing and life is getting back to normal.

Roy is first - my longest term resident and joint oldest, at just over five years old. He was brought in after he broke his front right paw when about 6 months old, but had it pinned and is fully recovered: in fact, he’s the one doing the most leaping up on to high surfaces and cupboard tops. 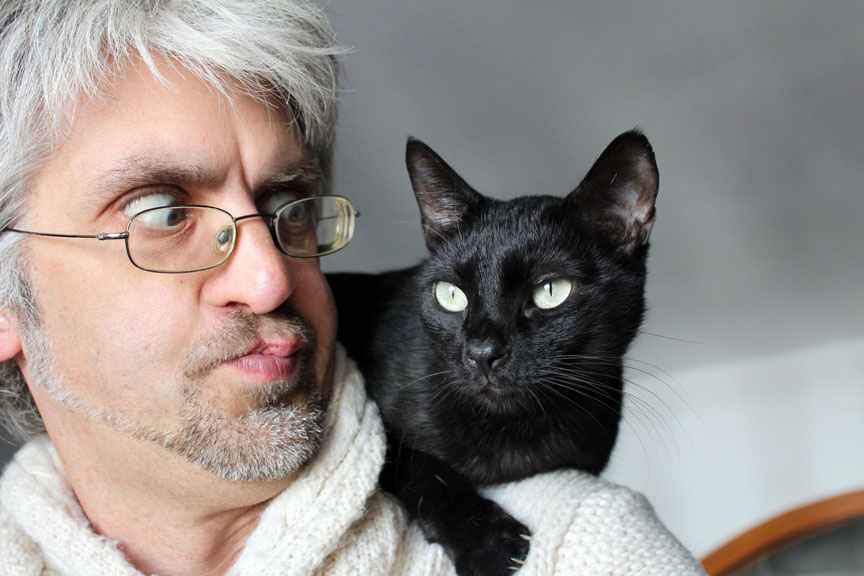 SIdney (all black) and Hoppy (black and white) are brothers or at least cousins of Roy, born about the same time as two mothers gave birth to 10 kittens between them who all grew up in the garden together. They came in after there was a spate of posionings and panleukopenia in the garden group and they were the most loving and friendly to people at the time. 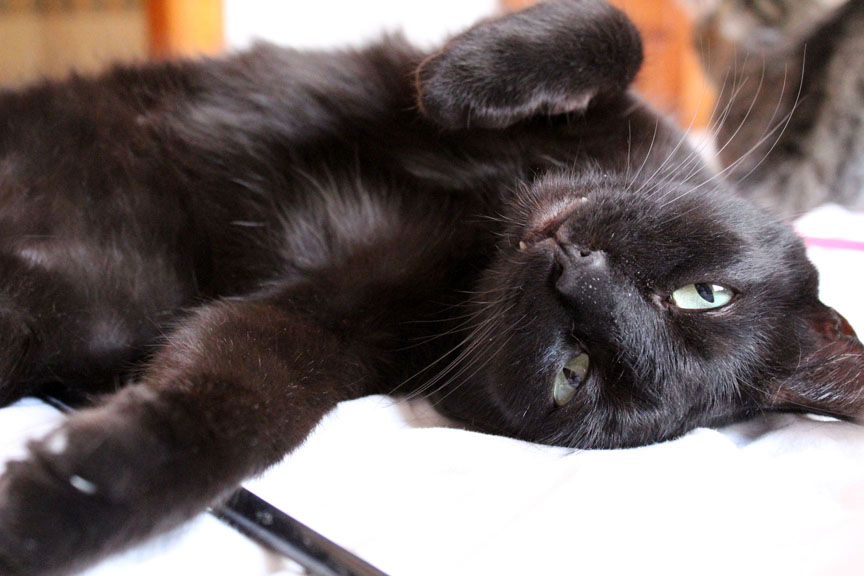 Next is Larry, just over three years old now and he was brought in as the last of a litter after being left alone in the garden. 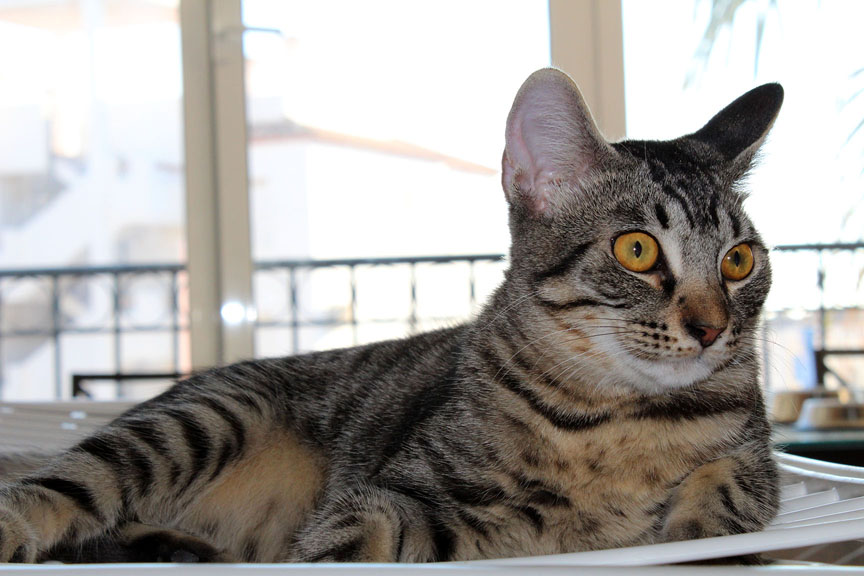 This is Sal - or Sally - one of a litter of four who came in to recover from a heavy bout of cat flu and settled so well, becoming a foster mother for several of the kittens to follow her. 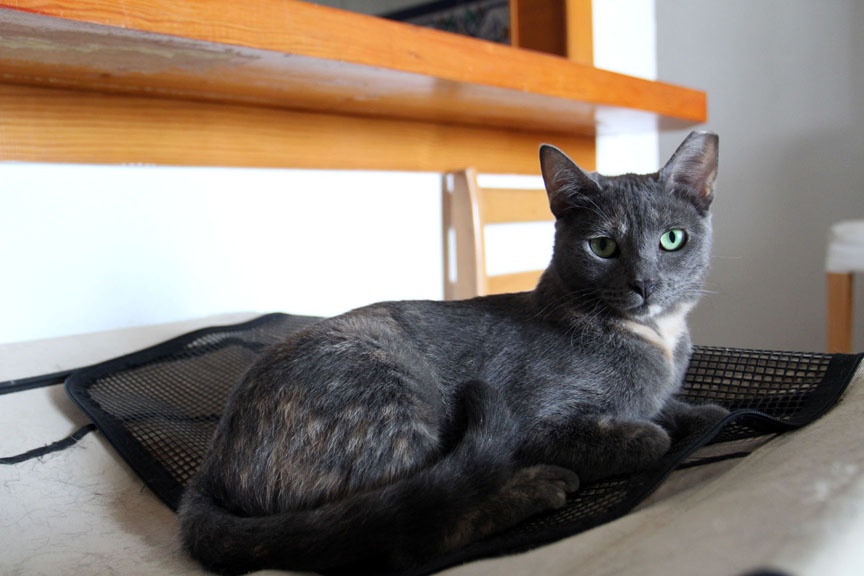 Then we have Clarence - my occasional resident as he still cant decide whether he wants to stay indoors or outside. Such a sweetheart though. 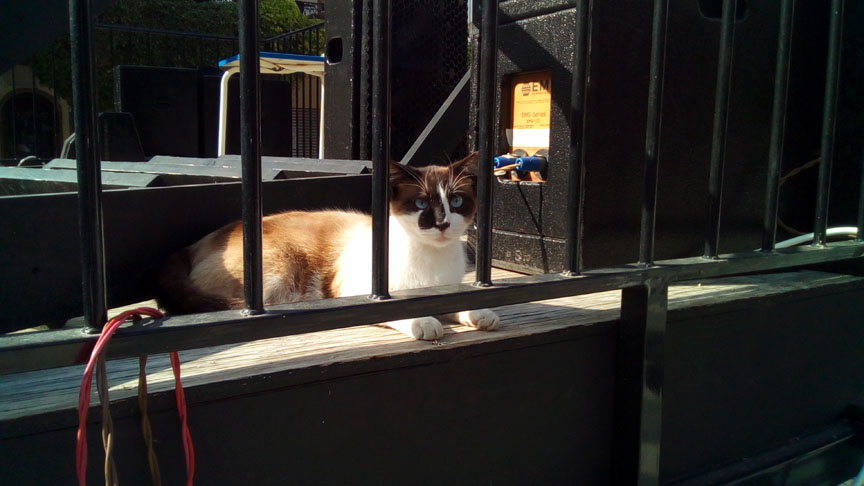 And the two newest younger female arrivals, who came in this year to recover from serious bouts of flu: Dusty (all black) and Sophia (tricolour white, orange and grey). 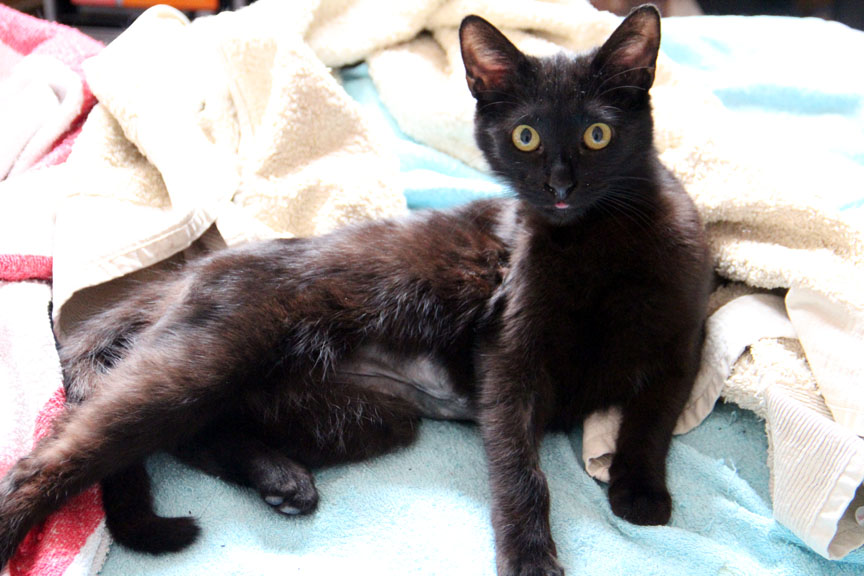 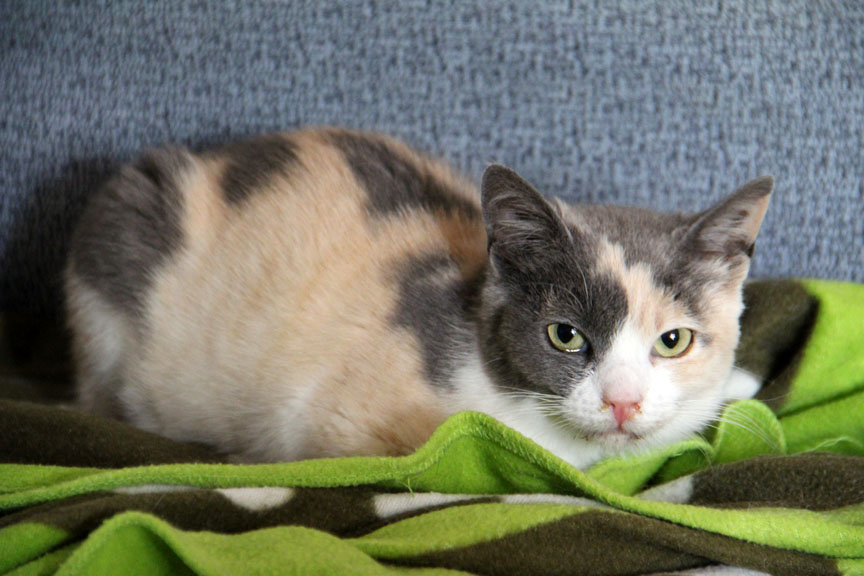 Behold the Oaf. Preventing me from beading. 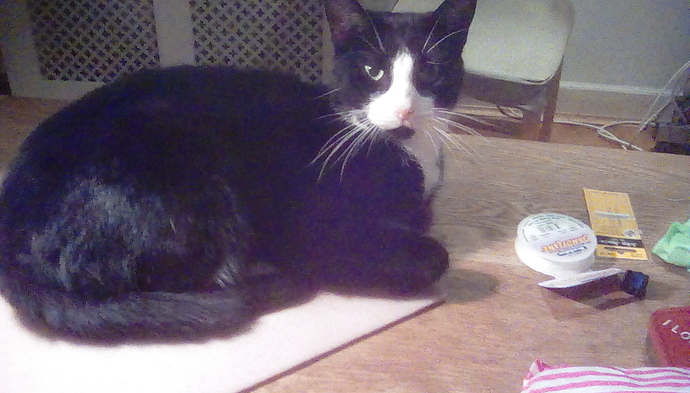 And - Oafishly - preventing me from washing. 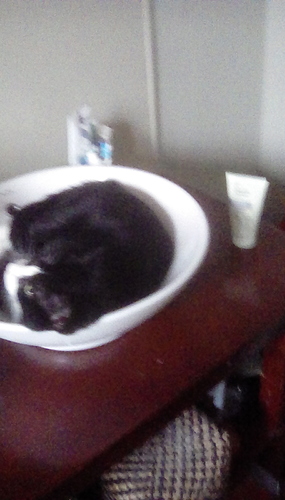 A cat who puts himself in a basin with a tap is a Trusting Cat.

or an Oaf… He did not get the name for nothing, after all.

A cat who puts himself in a basin with a tap is a Trusting Cat.

Our third cat, Taiki, totally loved water. When I was running bathwater he would thrust his head into the stream to drink from it. I was never quite sure how he managed to breathe! So it was no surprise when we found him in the bathroom sink.

My partner and I have 3 cats that are all Torties, so they can be a little hard to tell apart for those who are unfamiliar with them (and, in the dark, sometimes even then!) 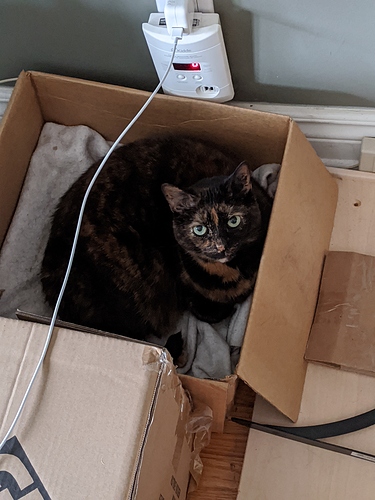 This is Donut. She’s our oldest kitten… we adopted her and her sister Milly (who left us for the giant tuna fields in the sky back in 2016) when Andy and I lived in Toronto in 2010. Donut is very relaxed, but super shy… she doesn’t like loud noises or fans, and she has a beautiful little voice that she uses very infrequently.

Donut tolerates me, and loves Andy with her whole heart. Oh, and she was named after the black cat from Trigun (in Japanese named “Kuroneko-sama”, roughly translated as “Lord Black-cat”, but in the English translations referred to as “Donut” because the two things the protagonist loves the most is donuts and cats). 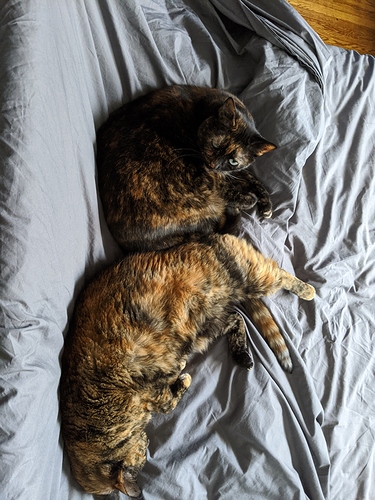 Here we see Donut spending some quality time with our youngest kitten, Koko. Koko is our floofiest cat, and our dumbest. We love her, but she’s dumb as a brick. Super chill, hates being picked up, but otherwise will entertain herself, hang out on the bed with her older sister, or explore with her middle sister. 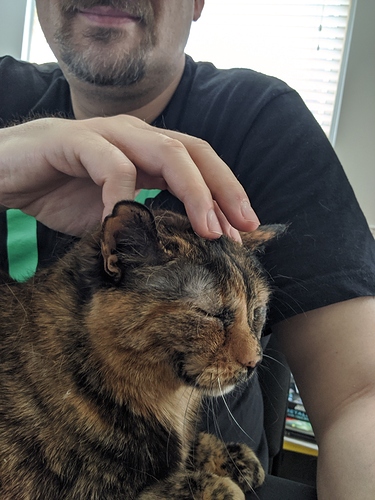 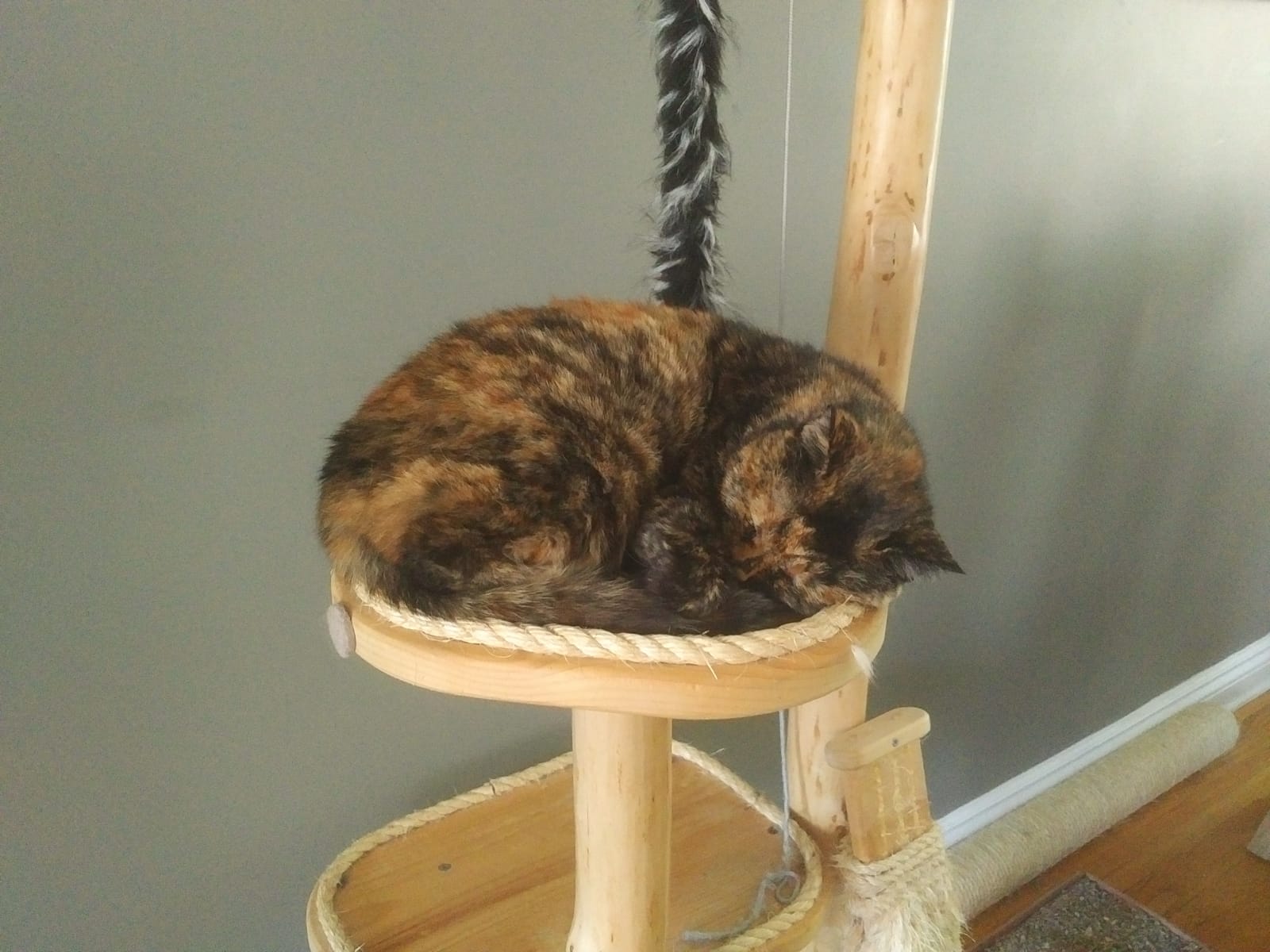 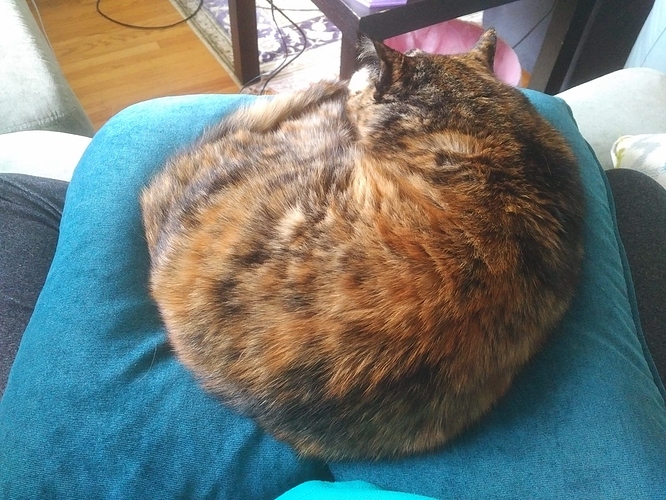 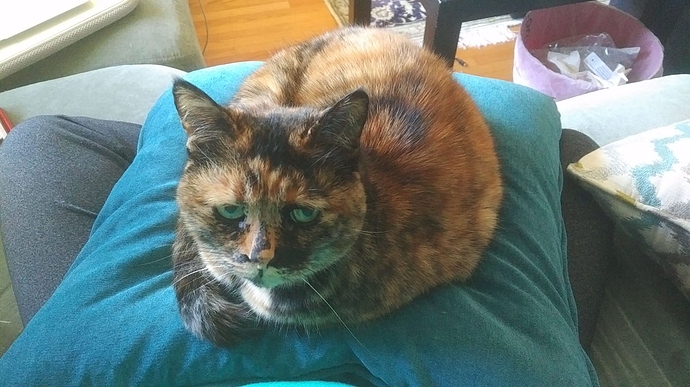 And, lastly, Bean, our middle kitten. We adopted Bean and Koko at the same time together as a bonded pair, because we didn’t want Donut to be lonely after Milly passed and because we don’t want them to be lonely. The three have a sort of loose-acceptance of each other… they don’t fight, but Bean is tiny and has a chip on her adorable, small shoulder as a result. Bean is also the most lap-kitten we’ve ever had, and will happily climb onto my lap or Andy’s, depending on whoever is warmer at that moment. She’s the most energetic, and purrs the loudest.

After we lost Taiki, our third cat, just before we moved to Riverside in 2016, we decided not to acquire a fifth cat, because Taiki had bullied Macavity ruthlessly (by dint of sheer aggression, as Macavity was more than twice his size!). We wanted Macavity to have peace and undivided attention. And he’s really come out quite a lot, though he’s still rather timid; here in Lawrence he loved to lie by the sliding glass doors and chatter at the birds. But we won’t inflict a younger cat on him; he’ll be the only cat as long as he lives, and then we’ll likely look for siblings of the same age.

Oh and I mustn’t forget my tarantula, The Cruel and Terrible Fate of the Great City of Atlantis! I’ll put it under a cut for arachnophobic types.

That is a delightful name.