Our pets. We love them, but… they can be their own special brand of weirdness, right?

What’s the quirkiest thing your pet does?

We have two cats, Morse and Marlowe, who are brothers, and Marlowe likes his greens. Specifically broccoli. If I am steaming broccoli he thinks that this is The Best Thing That Has Ever Happened, and will do whatever he can to get some of it. He will even come running if he hears the saucepan/steamer clinking as I’m preparing things, on the assumption that broccoli is going to happen (steaming other things confuses him); but once he can smell it cooking, his excitement goes up a few gears.

I had to go online to research this, and found that (a) he’s not alone, and (b) yes it’s safe for them to eat. (Maybe you also have a broccoli-loving cat?)

Morse couldn’t possibly care less about broccoli. As far as he is concerned it is not food (even if it is in his food bowl – he will sniff it and then ignore it).

I don’t know if it’s connected (again, his brother isn’t interested), but Marlowe will also bury his face in my empty tea mug (assuming I don’t see him in time to move it!) and lick the insides if and only if I used my home-made almond milk rather than soy milk. AFAIK almonds are an ok-in-small-amounts thing, so this just causes me to wash more dishes than I’d otherwise need to…

The oddest habit that Morse has is his obsession with the laundry door. It’s a tiny laundry – just a tub and washing machine in a big cupboard space, basically; not a room – but there must’ve been something good in there once, because literally every single time he hears that door being opened he comes running, no matter how short a space of time it’s been since he last got a chance to sniff that few inches of floor from the inside.

Our ~20lb. orange tabby, Paul, likes laying on rugs. This may not sound particularly quirky until you realize what his definition of “rug” is. The rug in the living room. The rug in front of the kitchen sink. The bathroom mat. The shirt that fell off the hangar in the closet. A stray paper towel. Loose mail. If it’s mostly flat and hits the floor, it is a rug. And Paul will lay upon it.

Thankfully, he’s a terrible jumper and so we don’t have to worry about “rugs” on tables or counter tops.

Morse couldn’t possibly care less about broccoli. As far as he is concerned it is not food

Me old dog, Digory, had a lot of quirks, the most annoying of which was his love of fishing rocks out of the river. He wasn’t interested in dry rocks. Or ones that were smaller than his dang head. He would stick his face in the water, find some kind of purchase on a massive rock, drop it 5 or so times (sneezing from getting water in his nose) and finally get it onto the beach. He start to bury it, which would get it dirty, so then he didn’t like it anymore, and then he’d go get another one. This would continue for as long as he would be allowed to pursue this strange addiction. 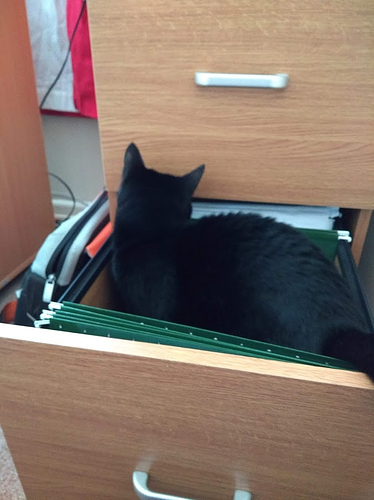 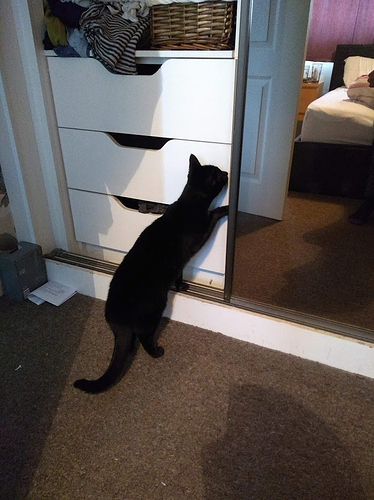 Having cohabited with over 20 cats in two households I can confirm that they are all wierdos in their own way! Of course that is what makes them all lovable.

My brother’s dog used to sit and watch the washing machine for hours.

she’s worked out how to open the drawers in our bedside tables.

Lizzy, a previous cat of ours, used to get a bit agitated at meal times (as cats are wont to do), and on one occasion while I was preparing her dinner in the kitchen, she walked up to one of the cupboards and just flung it open in a single motion. I’d seen her scrabble experimentally at them before, but never once seen her come close to succeeding (nor ever found the doors mysteriously open). It was like some weird threat that she might just open all the cupboards if I didn’t hurry up with her food.

I miss that sweet little girl. She loved to jump (very agile) or climb (occasionally painful) onto my shoulder and purr directly into my head (which generally made up for any climbing discomforts).

I’ve only had my current pupper, Gwen or the Lady Guinevere, for about two months so we are still getting to know her personality and quirks. The newest silliness to appear has been a desire to always bring something with her when going out or in. Just going out back for a quick pee? Must have toy in mouth. Coming back in and wasn’t allowed to bring fuzzy toy outside because it’s been raining lately and it would get covered in mud? Must bring stick back inside. It’s incredibly adorable even when frustrating and sometimes is also hilarious such as when she recently tried to bring in the biggest stick she could find that had come down in an overnight storm. 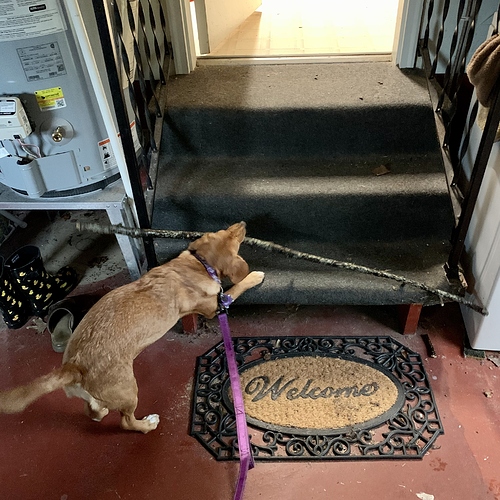 This was my Pugsly, sadly passed but he had a long life, over 16 I think, time gets fuzzy.

Anywho so this is a pug thing, but not every pug- he would lift both back legs up, like he was doing a handstand, then back up over a bush to poop. Or walk into a bush legs up, poop and walk out.

He was super loyal to me. At times he would use his trick to poop inside the shoes and or boots of people who were mean to me. 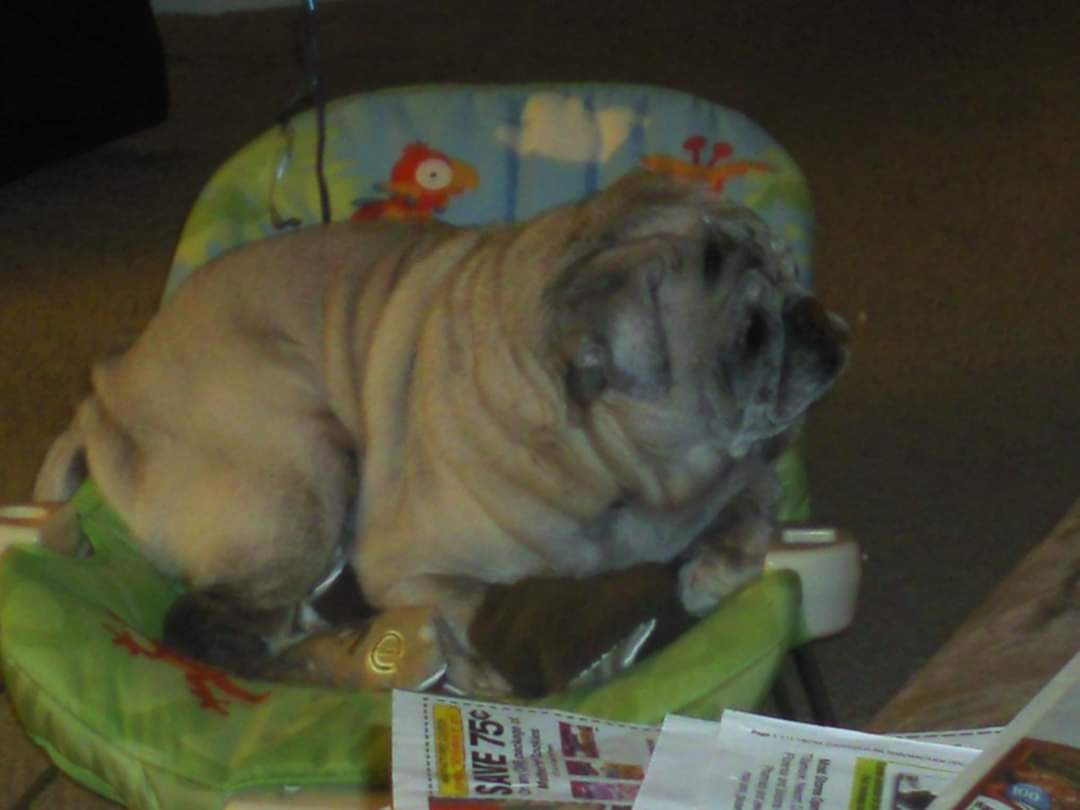 Morse reminded me last night of another of his quirks: Stompy Kneading and Log Rolling.

He’s done this since he was a kitten. Instead of calmly kneading with his front paws, he’s always gotten all four involved, and it’s always been very enthusiastic / slightly violent / totally hilarious. He does this on top of the duvet mostly, and I think when he was little he was fairly content to just stomp away at the duvet itself; but as time went on he got pretty particular about trying to do it while standing on someone’s leg, as they lay under the covers.

Morse is now a fairly big boy at 6Kg, and not the most coordinated of cats, and a duvet over the top of a leg is not the flattest nor the most stable of platforms. Consequently, while he seemingly tries to land on top, he inevitably slides down one or other side of the chosen leg with virtually every stomp. This form of the activity quickly attained the title “log rolling”, as it reminded us of nothing so much as someone trying to stay upright on a log floating on water.

We have a large front window that part of our couch sits under. Gwen loves to sit or lay on the back of the couch and watch out the window. If the two legged critters with the opposable thumbs don’t raise the window blinds in the morning as early as Gwen thinks should happen, her primary recourse is to stare at them until they take the hint. 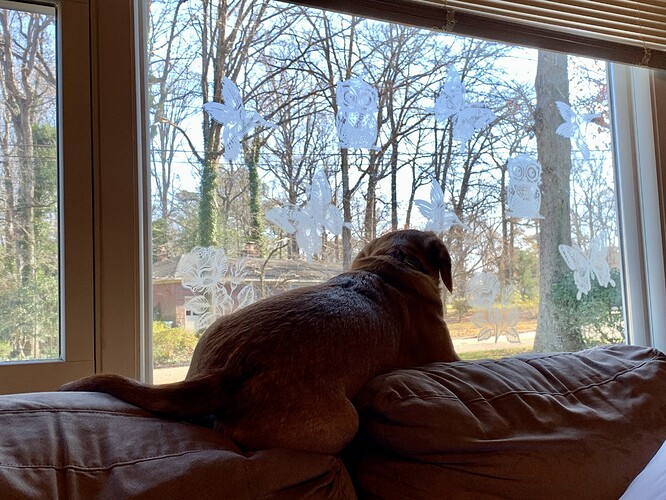 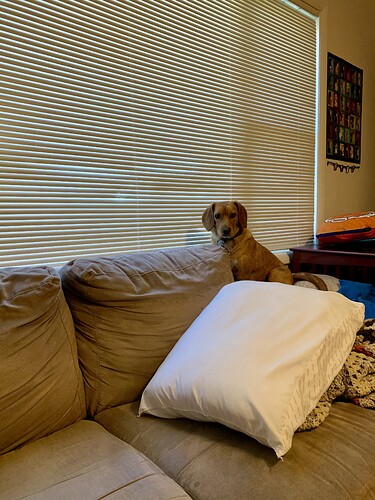 Continuing the discussion from Pet quirks and habits:

This is Goose after coming back from the “powder room.” 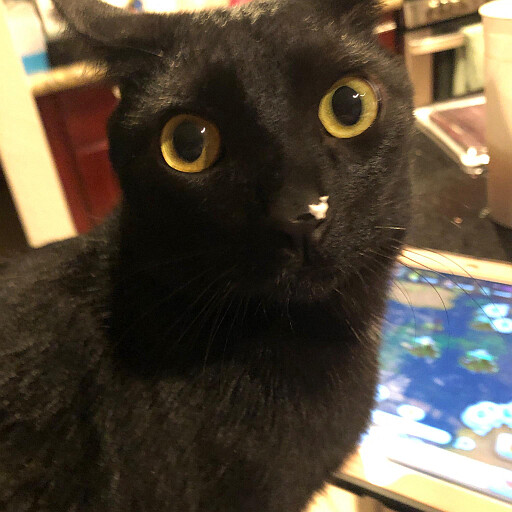