Oath PBF companion thread, for rules questions and the like

For 2 supply I will campaign against the bandits at the Wastes with the help of the Firetalkers (use one Secret) Am I right that should give me 6 Attack Dice against their 1 or is it 2 defense? Hopefully plenty to win. (I am really bad with the probabilities for these dice, do I even need 6 to win? I think I do)

6 dice vs 1 die + 1 bandit. You can add other bandit sites as targets if you wish.

The best outcome for defence is 3, the worst outcome for attack is 3 + 1 sacrifice, so you are guaranteed to win. The odds aren’t bad for 2 sites either, the risk is in not having 2 warbands left to take both.

You must declare battle plan use before rolling, so if Second Wind is part of your plan, you have to pay up-front.

I thought this was one I did after I won? In any case, yes I obviously plan to use it

No, there are no battle plans or campaign modifiers that can be declared after you win.

I updated my post to reflect that I am using it. I mean I am not going to lose this battle. I do not plan to attack other sites. There is only the Mine and that is not attractive to rule because it is so dark, I cannot even see the Black meeple on there.

(There is also the Salt Flats)

PS: I totally have a plan.

You have some basics wrong.

First, location: there are the major actions that cost Supply that require you to use a card “at your site”: Trade and Muster. Then there are actions on cards that do not cost Supply and do not require you to be at the site: you can use these from anywhere as long as you rule the site (you can also use any denizen action of the site you are at, regardless of rule). So, being at the site for a denizen action is optional if you rule it.

Second, icons: if a card has an icon top left of the text, pay attention to it. This defines when the text comes into effect: Trade, Muster, Travel, Search, Campaign… At any other time, an ability with such an icon cannot be activated.

Spirit Snare use is fine.

Provisions a) cannot be used outside of a campaign, b) is temporary for that campaign only c) is a battle plan so can only be used by the ruler of that site, d) you rule the site so there’s no need to Travel to it to use it.

There is no interaction here with Welcoming Party, which is a) a Search modifier and b) requires a card to be played, which is a distinct thing from just using a card.

What is the “pay 1 secret to Elders” bit? Trade? Trade takes 1 Supply and you have none left at this point.

Use of Tents to Travel for no Supply is fine.

So, to sum up, I think you could have achieved the desired result of ending up at the Buried Giant simply by spending 2 Supply to Travel there. The spirit Snare use is good, but the Favor on Provisions, the Secret on Elders, and the Favor on Tents are all impossible and/or pointless. 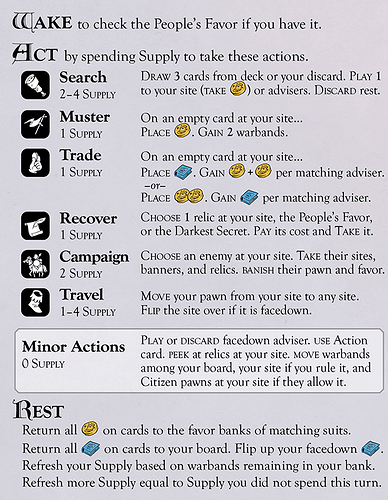 I thought I had to use the elders card power being on site.

We will skip that, and I will rest there, as I don’t think I can do anything else in the Buried Giant.

OK, so to confirm: please edit your post in main thread to use Spirit Snare, Travel to Buried Giant for 2 supply.

Things you could still do: use Taming Charm, use Elders, play either or both of your face down advisers (possibly using the People’s Favor).

Right, let’s reschedule that. So use Spirit Snare as before, travel to Buried giant using two supply, and rest there after uncovering my other two advisers, Travelling Doctor and Warning Signals. EDIT: By the way, I exile GeeBizzle, he’s getting too many secrets…

Exiling GeeBizzle would currently require you give 3 favor to GeeBizzle (discounted from 5 as you hold both Oathkeeper and the People’s Favor).

3 favour. Is that all a mans life is worth?

I assume that my exile will leave me without purpose. Just a lot of secrets.

Just waiting on confirmation from @Chewy77 that he knows 3 favor is the cost and wants to pay it.

I wish the Favor tokens did not look like coins, because it feels like the Chancellor is paying their Citizen to become disloyal. Normally that goes the other way around and you pay for loyalty.

Yeah, I think it’s an odd component choice myself.

I am hard-pressed to think of a better one though.

I thought this particular rule probably represented what the newly-exiled character takes with them on the way out.

And favor “coins” does seem to say something interesting about how Wehrle thinks economic power reflects and interacts with social and political influence.

Is the favour supposed to represent popularity with the denizens? That would make more sense in this case because they see the chancellor exile a loyal(?) citizen for their own benefit, thus losing some standing with the populace.

I like how some people list their “years” of service, but not what they did during those… Yes, I will use Taming Charm discarding the Old Oak from my site, and playing my Warning Signals adviser here on Buried Giant.

One last check: Now you have the Favor, Elders, yay or nay?

The current board state: 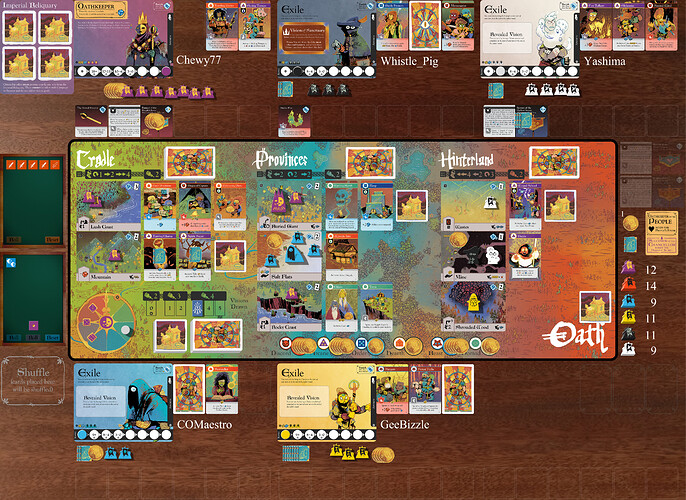 I thought it will be all gone when I exile GeeBizzle

The image shows you still have 5 favor after GeeBizzle is paid off.