Oath PBF companion thread, for rules questions and the like 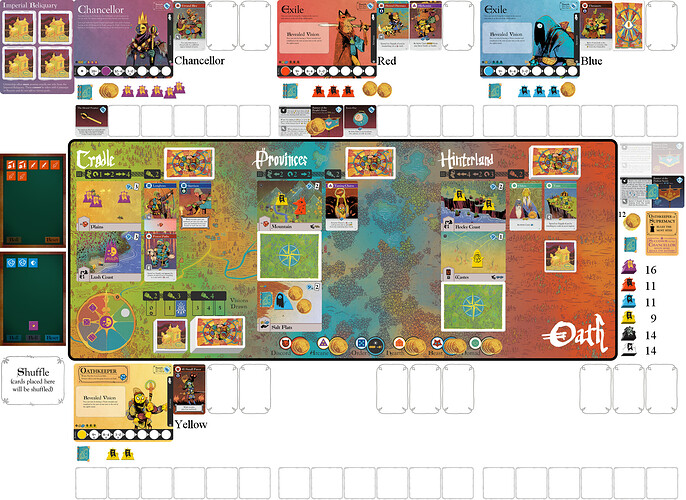 Sooner or later, I could probably use it to run a PBF game, if there’s enough interest?

I would need a Teach, but I am interested.

I need to have a good read of that manual, if you are struggling for people, I will jump in, but I have had a fair few PBFs, so I will hold back for now. Will follow for sure, though.

Also interested but would need teaching and probably lots of patience

I am definitely interested if there is a spot. In any case it would be awesome to see a campaign evolve.

The introductory game is for 4 players, and strongly recommends that if you have more than that, some players double-up on a character.

After that game, increasing the number to 6 would not be a problem.

I have played the intro already

but I’ll be watching. Also anyone worrying about rules that intro does a really great job introducing everything.

So, looks like @Chewy77 and @yashima will sit out, and @GeeBizzle @COMaestro @Whistle_Pig and @Lordof1 are going to start the chronicle off.

As mentioned above, yashima, Chewy77 and anyone else who is interested can pair up with one of the four players - you can debate moves and come to an agreement, or agree in advance to go with whoever posts first to keep the pace up. It’s a learning game, so I think it’s well-suited to such play, and I recommend not being too attached to the outcome and going with the “whoever posts first” option.

We’ll be starting with the intro game, in which the set up and first turn for each player are scripted. After that, anything goes.

I’m happy to buddy up. I will need to open my copy and read the rules.

if anyone wants me to coach then on the rules, let me know (I don’t claim I know everything perfectly but I have played a few games). I’ll be watching in any case.

I’d like to put my name down as “maybe joining later if there’s room”; I’ll certainly watch the first game.

Also happy to have a buddy

While I’m at it, which (style of) background looks best? 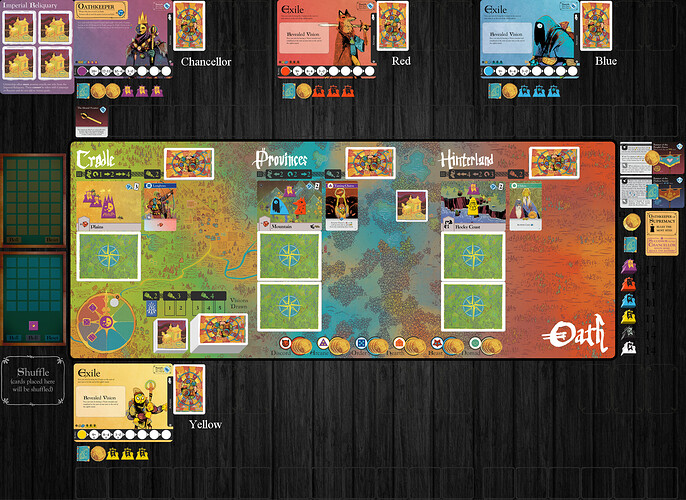 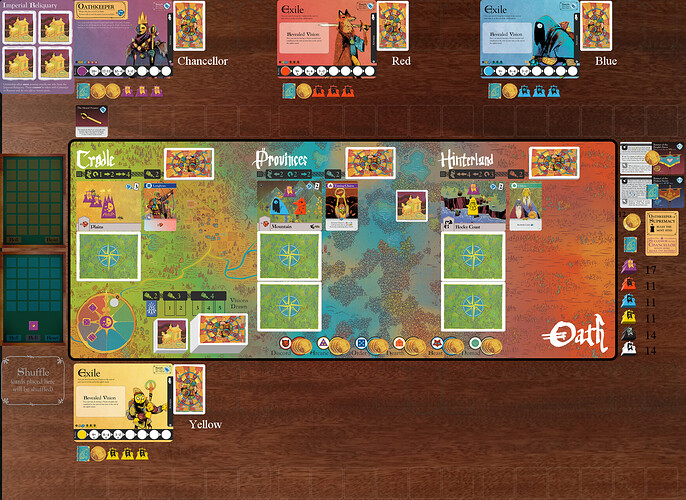 And if anyone has any good ridiculously high resolution images of wooden tabletops, I’d love to see them.

Can I vote for the background from the Pax Pamir mod?

I’m not really feeling cloth for Oath, though it would be funny to have that as a signature look.

I’m surprised to see colours winning out over white, but perhaps I shouldn’t be. Think I’ll go with brown, as that is my actual tabletop that I would actually play Oath on if I could. Just need to find the charger for my camera, and work out the lighting and stabilising for a decent picture…

darkmode ftw. I use the forum in darkmode and white is kind of blinding.

I’m glad they told me. 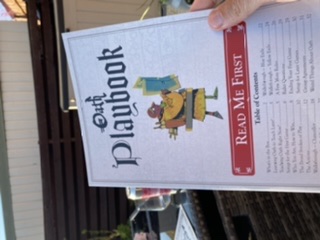