What sort or D&D character would you be?

One for fun. Imagine filling in this one to create a D&D character that is your likelihood

By the way, according to this, I’d be…

I think they got that sort of right? Although I am not sure if I’d like to live in the wilderness if it is too damp. But 3 years in an old kiwi house definitely prepared me for the worse

I Am A: Neutral Good Halfling Sorcerer (5th Level)


Alignment:
Neutral Good A neutral good character does the best that a good person can do. He is devoted to helping others. He works with kings and magistrates but does not feel beholden to them. Neutral good is the best alignment you can be because it means doing what is good without bias for or against order. However, neutral good can be a dangerous alignment when it advances mediocrity by limiting the actions of the truly capable.


Race:
Halflings are clever, capable and resourceful survivors. They are notoriously curious and show a daring that many larger people can’t match. They can be lured by wealth but tend to spend rather than hoard. They prefer practical clothing and would rather wear a comfortable shirt than jewelry. Halflings stand about 3 feet tall and commonly live to see 150.


Class:
Sorcerers are arcane spellcasters who manipulate magic energy with imagination and talent rather than studious discipline. They have no books, no mentors, no theories just raw power that they direct at will. Sorcerers know fewer spells than wizards do and acquire them more slowly, but they can cast individual spells more often and have no need to prepare their incantations ahead of time. Also unlike wizards, sorcerers cannot specialize in a school of magic. Since sorcerers gain their powers without undergoing the years of rigorous study that wizards go through, they have more time to learn fighting skills and are proficient with simple weapons. Charisma is very important for sorcerers; the higher their value in this ability, the higher the spell level they can cast.

Not at all what I would have expected.

But, when I went to the detailed results, my scores for neutral and chaotic were tied (26 points each for Neutral Good and Chaotic Good or 8 points each for just Neutral and Chaos) and my scores for Paladin, Wizard, and Ranger were all tied (18 each). Not sure how it picked what to give me out of those ties. Wizard or Ranger both feel like solid possibilities. I’ve never paid much attention to Paladin and my gut is it’s the wrong one of the three but I can see where it might be coming from. I’ve also usually leaned Chaotic Good in other tests and by general inclination rather than Neutral.

I wonder if Dex and Strength should be swapped.

My opposite would be a Lawful Evil Half-orc Barbarian as those are my lowest scores by quite a bit and that feels very accurate.

Not at all what I would have expected.

Yeah, if you’re a sorcerer, you’d want to swap your Intelligence and Charisma scores. As it is, Wizard or Artificer would seem to be a better fit.

I dunno, being a crap sorcerer may be on-brand for me…

I Am A: True Neutral Human Cleric (4th Level)

Wonderful! I got the psychopath alignment and the most boring race/class combo! How much stock should I put in this, I wonder.

I don’t know, but it looks like the hell of a good bunch of stats…

We true neutrals are very optimistic about our abilities

Alignment:
Neutral Good- A neutral good character does the best that a good person can do. He is devoted to helping others. He works with kings and magistrates but does not feel beholden to them. Neutral good is the best alignment you can be because it means doing what is good without bias for or against order. However, neutral good can be a dangerous alignment when it advances mediocrity by limiting the actions of the truly capable.

Race:
Humans are the most adaptable of the common races. Short generations and a penchant for migration and conquest have made them physically diverse as well. Humans are often unorthodox in their dress, sporting unusual hairstyles, fanciful clothes, tattoos, and the like.

Class:
Rangers- Rangers are skilled stalkers and hunters who make their home in the woods. Their martial skill is nearly the equal of the fighter, but they lack the latter’s dedication to the craft of fighting. Instead, the ranger focuses his skills and training on a specific enemy a type of creature he bears a vengeful grudge against and hunts above all others. Rangers often accept the role of protector, aiding those who live in or travel through the woods. His skills allow him to move quietly and stick to the shadows, especially in natural settings, and he also has special knowledge of certain types of creatures. Finally, an experienced ranger has such a tie to nature that he can actually draw on natural power to cast divine spells, much as a druid does, and like a druid he is often accompanied by animal companions. A ranger’s Wisdom score should be high, as this determines the maximum spell level that he can cast.

I find it slightly interesting that although I gave what I thought were mostly middle-of-the-road boring answers, I ended up chaotic, while you lot are neutral. I guess you all identify as more law-abiding than I do.

So basically, someone who likes to mess around in the woods and read books, and not be bothered by other people. Sounds fair enough. I’d always thought of myself as more chaotic neutral though

@Brattyjedi I was also confused by how it picked certain traits over others, since my scores for neutral good and true neutral were the same.

Yes to both. Tthe god damned quiz won’t let me pick both or pick the true answers, like how I am a cheap drunk but I don’t get hangovers because I know how/when to stop and hydrate myself, or how I watch scientific documentaries about nature, or how I would not injure or kill anyone to escape imprisonment because I’m a terrible fighter and wouldn’t be able to injure or kill anyone, or how it asks about religion 3 times and ever once lets me answer “none of the above, motherfucker.” Burn it all to the ground and scatter the ashes into the sea.

But hey, nice to see a fellow Chaotic Neutral at last. 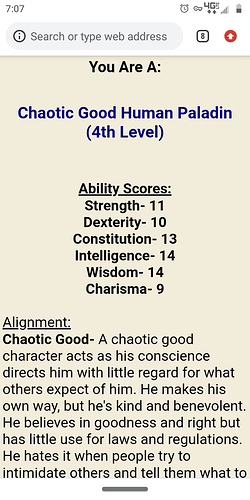 Overall, it’s exactly what I would expect; the questions only reflect my opinions about myself, so there’s no real revelations here. Am I averagely strong? I get an average strength score, etc. I would have put the low scores lower, but their positions relative to each other are pretty fair.

Some of the questions didn’t really have the full range; specifically for charisma, there wasn’t an option to say that I’m very bad. Like, it’s not that people won’t be convinced by my arguments, it’s that people with be less inclined to agree with me than if I said nothing at all! So I would probably have put that score at about 4? Anyway.

My biggest peeve is that the scores were tied for human and elf, but it made me human! I could have been an elf!

Wish I could roll a set of stats that good for a real game!

That is exactly how someone of chaotic alignment would think

Modulo all the reasonable objections:

Dex is probably too low, Con too high, but I’ll take the Int and Wis.