I tried searching and I couldnt find one. Looks like we never made one to continue the old SUSD thread.

I dont remember my old rankings but i dont mind.
The rankings are arbitrary anyway!

1.) Inis - Im having doubts on whether it’s still my fave because it’s been a while. The queen might get dethroned.
2.) Tigris & Euphrates
3.) El Grande - you can change this and the above two and I dont mind. Still a very lean area majority game.
4.) Innovation - how can so much game fits in a small box card game!?
5.) The Great Zimbabwe (NEW) - so far, my fave Splotter.
6.) Container (NEW)
7.) Dominant Species - defo dropped a bit. TGZ, Container, and Innovation have smoother design. Still scores big pts for gameplay-driven narrative and tense area majority.
8.) Stephenson’s Rocket (NEW) - another Knizia I’ll keep blabbing about from now on.
9.) Imperial 2030 - went down a few places from what i can remember.
10.) Cthulhu Wars - not much have changed. I still love how streamline it is, yet highly asymmetric.

Fave fillers: King of Siam/King is Dead, Wildlife Safari, & Goodcritters. No change from what I remember.
Just One, Quo Vadis, and Razzia! were the only impressive fillers Ive played last year or so.

The rankings are arbitrary anyway!

I used to write an update to my Top 10 List every year or so… might as well start here:

10- Gloomhaven (It’s not THAT good, but it is VERY good, although too complicated for its own good. Still, played it once a week every week in 2018… and never since)
9- Xia Legends of a Drift System (my absolute favourite sandbox game, a hard genre to nail, but Xia does so!)
8- Aristeia (Beautiful models, interesting strategies, good interplay between dice and cards)
7- Blackstone Fortress (Beautiful models, simple but engaging mechanics, lots of dice-chucking, and a remarkably clever AI)
6- Scythe (Not a great example of anything, but a fabulous synergy of many different games into a single box)
5- Imperial Assault (Dungeon delving done right, fully co-op, and space wizards with laser swords)
4- Space Alert (Would be higher on the list, but really hard to get to the table in several years. Still my favourite co-op game of all time)
3- Dune (Bene Gesserit are amazing, and few games are so thematic while still being fun!)
2- Galaxy Trucker (Chaos, thy name is Galaxy Trucker… fun, frantic, and ridiculous)
1- Twilight Imperium 4th Edition (Greatest game ever crafted by human hands… and now with the expansion!)

There was a bit of chatter several weeks ago amongst the staff here on the forum about possibly putting together a tabulated/calculated Forum Top 50, where everybody submits their Top 50 games and one of the staff tabulate all of the data.

In support of that idea, I was working on a web app to assist in the formatting of the data. I haven’t had enough time to commit to it lately, but it is available here for users to test in its unfinished state (BGG Collection import doesn’t work at all, the button does nothing):

EDIT: posting this here doesn’t make a ton of sense if we’re just talking about Top 10s. But it does inspire me to add some more features, such as Markdown Export and the ability to add comments for each item

Having a quick look at my rated games on BGG…

1- Everdell: played it only once, and it did not let me down, quite the opposite.
2- Root: I think it is one of the best combinations of asymmetric warfare and lovely art out there, specially with expansions.
3- Gloomhaven: it used to be number one. Now, the heavy set ups, and the slightly unbalanced difficulty curve puts it down for me. And I have a suspicion that with time it will go lower…
4- Battle for Rokugan: I love that element of deception included in a avery good war game base.
5- Brass: Lancashire. I am yet to play Birmingham, but so far, this is my favourite network game, by a distance. Even if I hardly ever win at it.
6- Cthulhu: Death May Die. If you are able to look past the absurd title, this can be tons of fun, with an interesting mechanic around madness.
7- Century: Spice Road. I think it is a very clever design. Would love to play it with the family, to take over Splendor…
8- London (2nd Edition): another Martin Wallace game. Cannot wait to play it again.
9- Oceans: caught my eye since I saw it played by Matt and Tom on a streaming session. I really enjoy its simplicity to represent an ecosystem and how the species adapt and maneuver for survival.
10-Thurns und Taxis: such a shame is out of print, really loved this game when I have played it.

Now, on to play more games to see how I can change the list

I haven’t been able to play all those recently acquired area control games… my list would be full of them.

Glad to see this thread come back

Another excuse for some Pub Meeple! 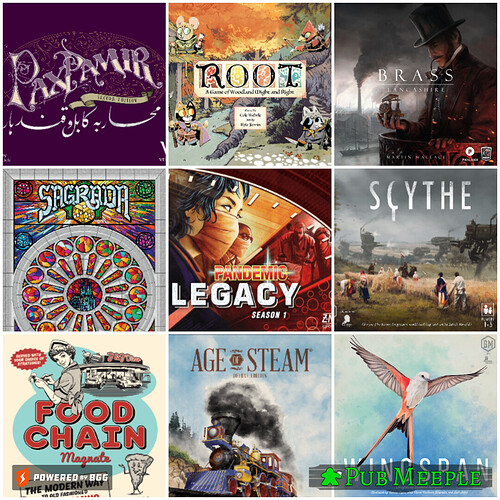 I bet mine hasn’t changed.

8.) Stephenson’s Rocket (NEW) - another Knizia I’ll keep blabbing about from now on.

I should really play this.

I used Pub Meeple so I didn’t have to put any effort into thinking about my rankings. I think I’ve ended up with a more sentimental top 10 rather than a logical one.

The Champion of the Wild

I’ve been thinking about how we are going to need to do this one as a play-by-forum.

Also need to see about acquiring some card assets.

Optional rule: You have to put yourself in for one of the events - with the benefit of having had 4 years to train

Easy… whoever runs it, their rules…

I’ll toss my pubmeeple top 9 in here since there’s something so satisfying about looking at them (just me?). 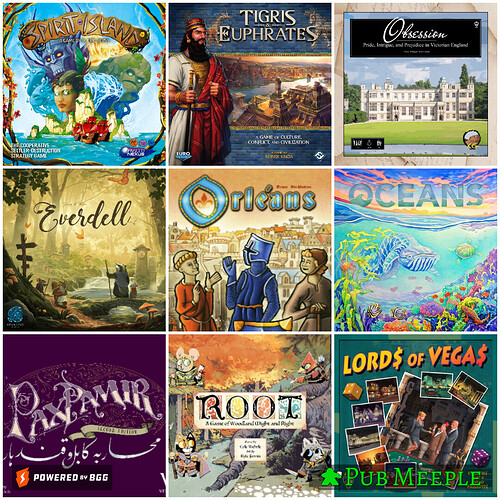 Mine has changed a decent bit since the first time I did it. That’s likely because I’ve gotten to broaden my horizons.

I’d say that the order here may not be accurate even now.

But if we wanted to have a longer list, giving more games a chance… we would need to use some automation as proposed by @pillbox because I’ve entered the games manually. I love though how quickly some favorites appear even with just 8 lists.

I find these very difficult but I’m glad to see I’m continuing the tradition of having never actually played many of the most popular games.

But looked at in terms of “how enthusiastic I feel about this game right now, on a grey Tuesday morning”, and therefore subject to change by the end of the day:

(My most played game, Letter Tycoon, is one I enjoy but I feel I’m coming to the end of my time with it. I’m ranked #2 in the current BGA arena season, I think #11 rated on the site, and without bragging if I don’t win it’s because of luck in terms of who gets the multiplier cards. I don’t think there’s much more strategy to explore.)

I am watching this thread with interest to see if any of the games on my shelves and cupboards ever appear, let alone what might be in my personal top 10. I can forsee a few that might do but I wouldn’t be overly surprised if none do.

My top 10 is more or less a count of the amount of hours I’ve spent playing the games in question. The top four are all online/app games now, which is perhaps not all that surprising.

1 Chess - my rating has been more or less static for about 8 years on chess.com and I’m still addicted
2 Through the Ages - I still have one solo achievement unfinished on the app, which could take a year’s worth of grind. I can see myself putting in the time.
3 Here I Stand - 10 online games of this in the last year have pushed it right up the list. A real antidote to lockdown. Thematic to the max. I’m going to sneak Virgin Queen in here too, because I’d play either, but Here I Stand has an online implementation that enforces the rules, and Virgin Queen doesn’t, and that clinches it
4 Twilight Struggle - the more I play (exclusively on the phone app now), the more I like it
5 Caylus - will always have a place because it’s my ur-game. Still holds its own against any Euro
6 El Grande - with 5 players, I’ll always want to play this
7 Game of Thrones - an excellent afternoon game that is fun with teenagers
8 Brass - the game that proves that a bleak setting, a tedious final count and a weird map reset half-way through are definitely not real problems
9 Earth Reborn - ridiculous skirmish game that I haven’t played for years and is wonky in various ways, but is a very fun 2-player game regardless. I can’t have a top 10 without including it.
10 Keyflower - best Euro that isn’t Caylus. Would probably rank higher if I felt like I understood it better. In other words, probably better than I give it credit for.

Honourable mention: Agricola. One of the best games ever, but I suffer from serious experience lag so I can’t even nearly compete with the owner of the game, making it less appealing because normally close games are more fun.

Edit: I forgot about War of the Ring. That should really bump Keyflower. Genuinely thematic (by which I really mean tilting towards roleplay), and I really enjoy the theme.