Oranienburger Kanal now paid for. I’m kind of really excited for it!

Update: someone else in my house backed it…

It was the cat. For sure. Even if you don’t have a cat. 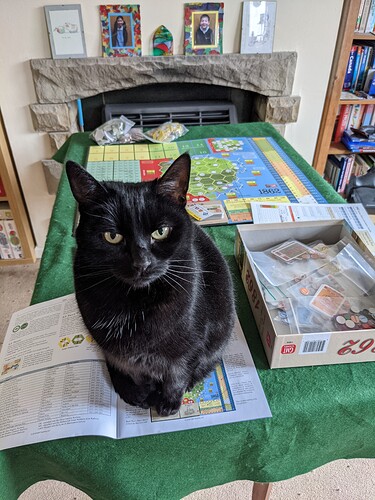 I am very tempted to back that project just to ask all innocently “who designed this game, then, and why isn’t their name on the cover?”. Not going to, though.

QE is on kickstarter along with Kabuto Sumo if anyone fancies it.

So there are four games each with an amount of expansion content. 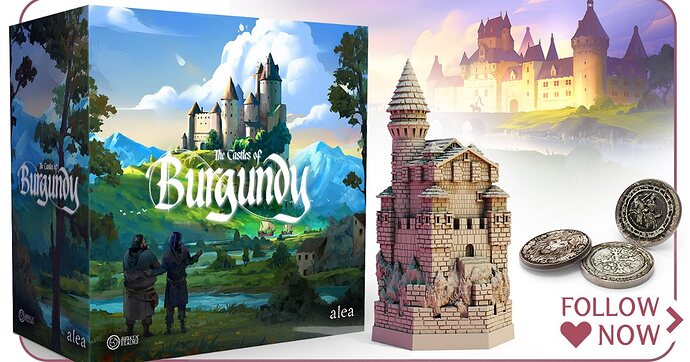 One of the best Board Games is coming back in an amazing special edition. Awaken Realms and Ravensburger are teaming up together to craft a refined experience that will elevate Castles of Burgundy!

I’m sure it is. Hopefully, it will be so expensive that it will be an easy pass.

I want there to be unspecial variation which just the tiles where the icon on the tile tells you what it does. I don’t get how Castles of Burgandy has lasted this long without someone changing the stupid four similar houses meaning wildly irrelevant and different things.

What irritates me are the animal tiles, between two and four tiny almost indistinguishable pictures. A large picture and a number will do thanks.

And then we get a dumb 3D castle.

Rant over I don’t like the game much anyway.

I’ve been following the pre-campaign updates, and it’s been soul-crushing. They started out with something that looked radical and fresh, and gradually were nudged by commenters to recreate the beigeness that has always defined it. The one thing everyone asked for that they ignored was changing the color of the beige tiles, which is the biggest aesthetic problem (what with yellow and beige both being fleets of nearly-identical buildings).

I don’t own the original, so am still considering, but it’s gone from looking amazing to being a rather hard sell. They changed the color of goats… that’s kinda it. When I could probably get a used copy of the previous version for a quarter of the price?

Similar feeling here. Usually I like how the public can influence a game development, but I am not sure the input has been very positive here. I don’t think the game needed bling miniatures, it needed a retake on its graphic design and art, sure, but not KS plastic bling like it is turning into.

I wonder about selection bias. People who Kickstart, people who already like the game…

People who Kickstart, people who already like the game…

If a publisher just wants to reprint a 10+ year-old game and cater the graphic design and components to that niche and take in all the feedback (now matter how ridiculous) and make money for themselves and the designer, who am I to judge? If their goal is to bring it back to prominence in retail or bring it the mass market, then clearly this is not the right approach.

I have the original German version (should have waited a few more months to get a cheaper, English version). I have a bunch of promos for it. I like it. I don’t play it enough. The project does appeal to me, but I really can’t justify buying it… but I’m tempted (hence the Damn it).

It’s pretty embarrassing if after ten years of the game being out and including an already out ten year cleaned up anniversary edition they’re still asking for tips on how to make the game better.

Of course is this really about making a good thing the best or just… a thing to sell to people?!?

I saw someone talk about the new Ra and how the old editions had a fiddliness on whether some tiles are permanent or not. O Toole comes in and says “on this board all tiles on the left of the board are temporary and all tiles on the right of the board are permanent”. THATS GREAT DESIGN*. he’s not going around asking for tips from randos with money to burn on nostalgia.

*okay it might be a bad choice who knows. The point is there was a vision and there was a desire to solve a blatant problem in the cleanest way.

Ugh. Scalecolor has launched a new campaign expanding their line of artist series paints, which now include a select line of inks. It’s SO much for me to commit to right now but I’m absolutely in love with my set (complete first series) and have been dying to flesh it out.

I haven’t even looked at what shipping might be yet, but it’s going to be a shocker. Sadly I found no domestic retailers (finding the brand is hard enough, forget the line) for the first run and ordered it direct from Spain. That was before the shipping crisis and I don’t suspect I’ll be as willing to eat the cost for the pleasure this time. I might need to just pass.

I was typing on the phone earlier. I was thinking more that the people who are giving them advice on the game on the crowdfunding platform are likely to be people who crowdfund a lot already, so that’s going to bias them towards Standard Kickstarter Game.

(Just as, with a roleplaying system, the feedback you get from your fans can be valuable… but you also need to find out why people aren’t playing it and what you could do to put them off a bit less.)

People keep saying this and there’s literally one piece of plastic: that castle. Yes, it’s going to be bling-intensive but it’s going to be things like bigger tiles, dual-layer player boards, metal coins, and copies of every one of the special Duchy boards ever made for the game sufficient to play with all four people having the same Duchy. It seems like a big upgrade from what was a pretty ugly and poorly produced edition previously, without spending a lot of time and money on stuff like minis that wouldn’t contribute to the game. (That one castle aside.) Now, I’m not backing it. I recently sold my copy of Castles of Burgundy and it wasn’t because I knew this edition was coming, it was because I’d played it once in the better part of a decade of owning it. But if I were more of a fan this would be right up my alley.

As an aside, I doubt it’s going to replace the standard edition in stores. I mean, I won’t swear to it, EGG’s deluxe version of Rococo is the only one you can get nowadays for example. But Castles of Burgundy has the sort of price point non-boardgamers consider, and this one probably won’t. And CoB is in print as far as I know, and Rococo hadn’t been for a long time.