What Kickstarter, Gamefound, etc. projects are folks currently backing or watching? And what Kickstarted games are you waiting to receive? Are there any games you backed on KS that fell flat for you once you actually received and played them? Please feel free to use this thread to share your thoughts on all things Kickstarter!

Steampunk Rally Fusion is open until 14 May. As I write it hasn’t yet funded but it’s over half-way there and it’s only been a little over an hour. 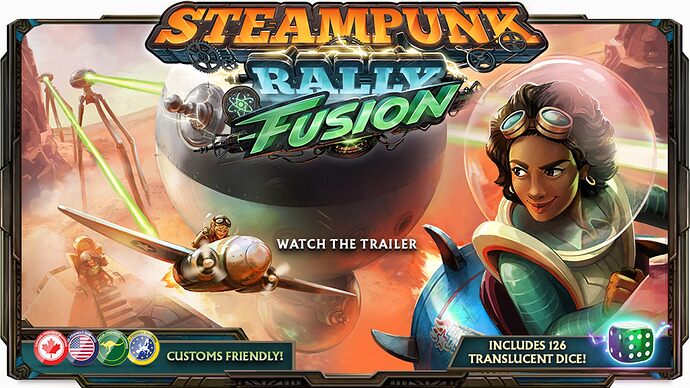 Build and race fantastical machines through treacherous terrain using the mind of your favorite historical inventor.

In keeping with one of the modern trends, it’s a stand-alone game which you can combine with the earlier Steampunk Rally (also available on this KS, though I already have it). Mechanically it looks like SPR with bonus complications.

SPR to me is less of a race game and more of a drafting, engine-building, dice-management game that happens to have a racetrack-like scoring board - a little like Flamme Rouge in that respect. I met it at Essen 2015, played a demo round, and immediately bought a copy, though I don’t play it often enough and I need to refresh my memory of the rules each time I get it out.

Bonus: you can play as Hedy Lamarr.

[why not a little double-entry for a few days]

I played a friend’s copy of Steampunk Rally (the original). It was a game that I was convinced I would absolutely adore and need to get my own copy.

After the one play, I’m not sure I would buy a copy if offered at a decent price. It really fell flat. I am hoping my friend continues to buy more of the series and maybe some combination of the entries into the family will give me the feeling I was hoping to get from the game. As it was, I felt like I wasn’t really given enough decisions to make a good “engine”.

It can be frustrating, and one thing that I think games have improved hugely over the last decade or so is, call it slickness, the avoidance of a bad experience just because of bad card draws or whatever. I don’t yet know whether or to what extent Fusion will improve that.

I’m looking forward to the Railroad Ink Kickstarter. I have both of the Red/Blue editions and the idea of being able to add another couple of colours is too appealing to pass up. I realise I’m starting to sound like @pillbox and his collection of Roads & Boats but they are so nice…

You are in good* company. I already have Railroad Ink: Blood Red edition as well as Railroad Ink: Brazen Blueberry edition and I am watching the next two closely as well…

*: For some definition of “good”

Four Railroad Inks probably still take up less space than one Roads & Boats. I’m also planning to get in on this one.

Phew, less unusual than I thought! thanks all

[do the thing twice!]

Allegedly, an 18xx-lite game along the same lines as Mini Rails. A collaboration between Mark Gerrits (of Mini Rails, SteamRollers) and Moaideas Game Design (Mini Rails, Flow of History, Tulip Bubble, Symphony No.9).

I wish they would drop the trainmeeples (traineeples, if you will) for cubes… those tiny form-factor trains create an awful tactile experience- I’d much prefer simple cubes.

Huh. Looks like the forum software pulls a static copy of images… so that graph will never update.

Huh. Looks like the forum software pulls a static copy of images… so that graph will never update.

I thought the old one did too… the idea is to make images last even when the originals have vanished. Hmm. I’ve just listed kicktraq.com to have that disabled, so that might work now, at least for new posts.

I took a look at Excavation Earth after the art in the SUSD weekly news caught my eye. I ended up making it my second-ever Kickster pledge becasue I noticed a conspicuous light-hearted post-apocalyptic market manipulation game-shaped holse in my collection 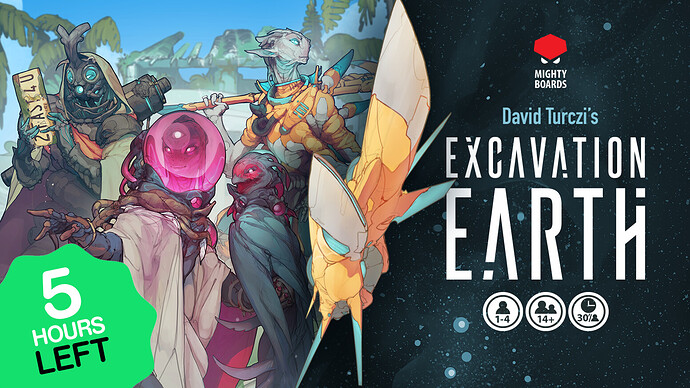 Lead a race of alien explorers excavating artifacts from Earth in this set-collection, market manipulation game by David Turczi.

Definitely interested at this, but not sure if I want to pay up for the limited edition

Yeah, if the retail edition will have cubes, I might drop my pledge and just wait for that.

I don’t have any of the Railroad Inks yet; I wonder if you’ll be able to get red/blue with the yellow/green Kickstarter

I doubt it. The Red/Blue are from a different publisher, CMON

Nah, CMON only did the English editions of Red/Blue in partnership with Horrible Guild

It would seem like a shame to not include them, although I imagine that buying the full set would be very expensive. I’m curious to see how the new rules work, since it seems like they’re moving away from the simplicity of the original pair.