Show off your boxes (photos of your collection)

I used to find it interesting to see other peoples collections in photo form on the other forum. So I’m starting it here again. Also my collection has evolved since I last posted a photo, not least to now cover 2 sets of shelves. 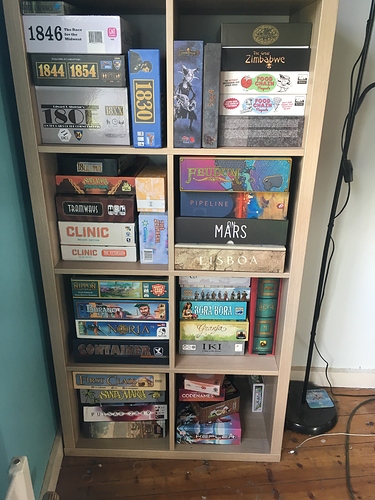 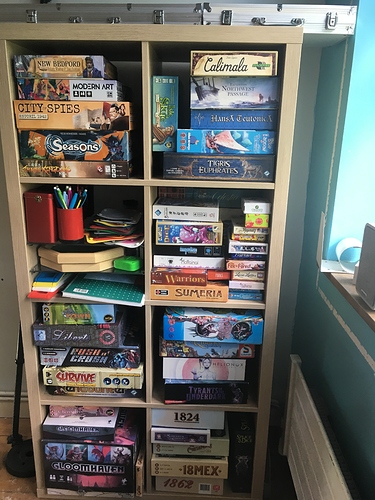 Then there’s the side table underneath which is boxes too big for the Kallax. 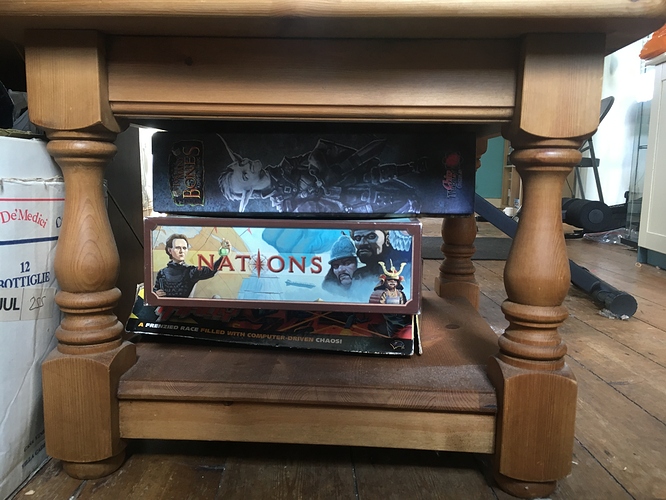 And the cupboard for Roads and Boats plus unused boxes. And the second copy of Gloomhaven. 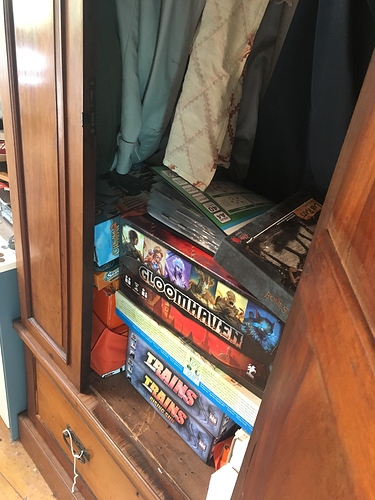 Huzzah! I also enjoyed this thread at the SUSD forum and have been debating restarting as my own collection has grown since I last posted there and recently been reorganized to try to make some more room. I’ll be back later with pictures!

I think I will be waiting with an update of my own until a few of more of those Kickstarters arrive and also I need to figure out a solution for storage that doesn’t include having stacks of games sitting on chairs next to the dining table.

I want to do a reorg to get all the 18xx together. I’ve been putting it off as I wanted to get my space themed games together and maintain my associations organisation

Collection photos are fine as is, they always evolve and it’s better to see them in their natural habitats than not at all

I’ll be posted a shelfie just as soon as I get my collection moved to my new house (and buy the new Kallax that will be needed, now that we’ll have the space for it)

Nice collection. Where did you put Chicago Express? 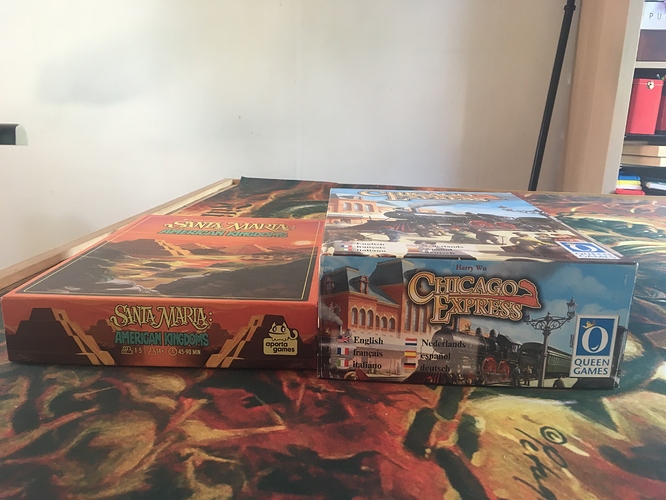 My husband’s and my little ol’ game room!

View from the door.

Moving around the room, with the knick-knacks removed from the shelves so you can see the games behind.

First big shelf and Pandemic Legacy Season 1 Shadow Box (should be far enough out a view of it to avoid major spoilers I hope!) 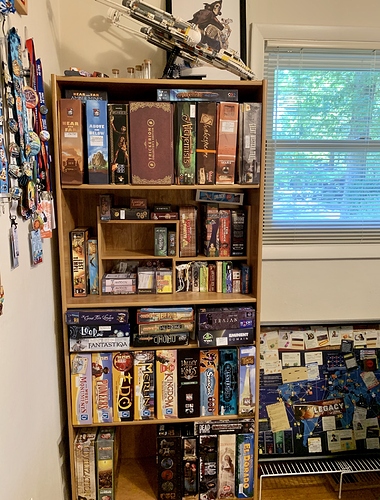 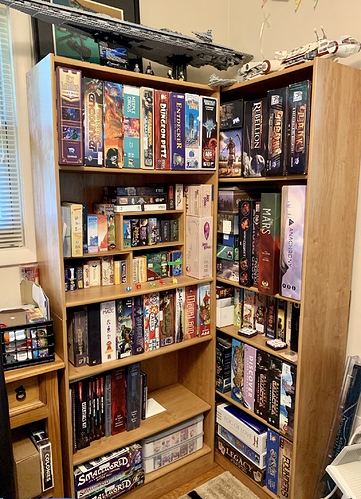 Half shelf under the window 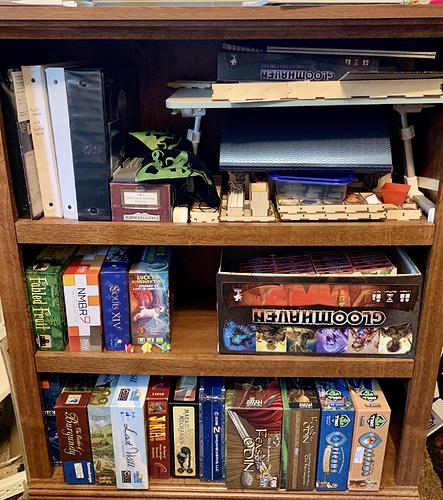 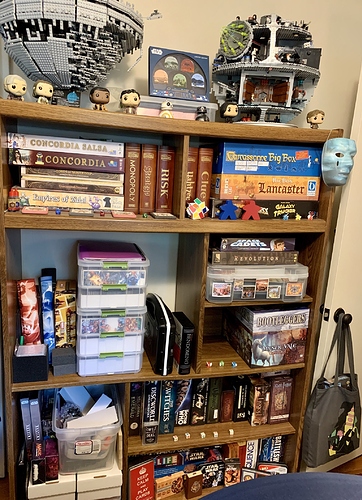 The tv wall unit is between where the room door swings open and a closet. In the closet is a small cloth bin of party games and rarely played card games to pull out when people are over or when planning what to take somewhere. 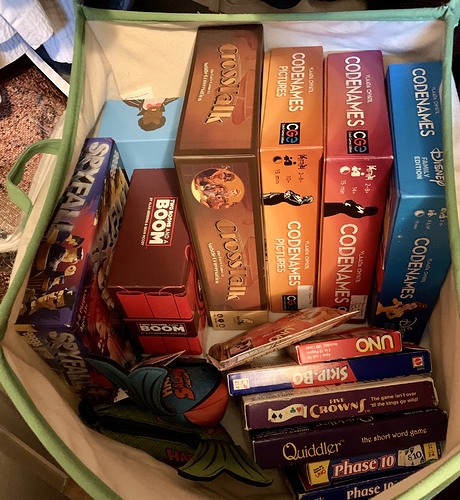 And a shelf of duplicates, more rarely played games, bigger party games, and the few empty boxes we are unwilling to trash. Moving this stuff into the closet was a big part of the recent reorganization that I did to open up some space on the main shelves for more games.

The remaining mostly unseen wall (would have been the first going around from the door) is a Lego Minifig and Disney trading pin display wall as there isn’t enough floor space for more shelves and they don’t stick out very far.

Queen Games should be sent to the Hague for their oversized boxes.

Yes!! I’ve got enough expansions in some of mine now that they are actually fit for purpose. My Kingdom Builder Box is stuffed full. The Lancaster Big Box on the other hand could probably fit everything in it into a box the size of a normal Queen box.

I ended up buying Lancaster and its expansions individually and then cramming everything into the base game box. It’s a tight fit… but it’s all in there; surely, then, the “Big Box” was not necessary. I also did the same for Fresco… but it’s less of a success story – it’s very obvious that it is a full box, and that doesn’t even include the new stuff that came out in the last couple of years.

I second pillbox. I still have my copy of original Lancaster with all the expansions. It all fits nicely. I chucked out the insert.

What’s behind the doors? No one will ever know.

Then there’s Arkham Horror LCG and Netrunner in the study, and Star Wars Destiny under my bed.

(Getting some more floating shelving put in at the weekend, so some of those books will be migrating soon. Especially the comic books - need to minimise the man-child looks)

@EnterTheWyvern I’m very envious of your Splotter collection! @Brattyjedi that shadowbox is fabulous - I want to do something similar if only I can get this game of Pandemic Legacy S1 finished

Our wall of board games (plus one side of a carrom board:

Overflow shelves under the window:

I love all your pictures

on September 24 the local “place that sells Kallax shelves” is going to open. I am oh so tempted to figure out where to fit a 4 by 4 into our living room (or any other–impossible but a girl can dream, right?)

How do you each curate your collections? Do you have themes? Keep favorites only? Try to have something of everything?

I find great joy in organizing my collection. It’s probably overly-materialistic of me, but I don’t mind indulging myself.

When my collection was small, I used to use a very straight-forward system. Less-complicated games near the bottom, more-complicated games near the top (this was backwards to my first instinct, but the end result was that shorter people (read: children) would more readily find suitable games at their eye level). And then horizontally, they were roughly organized by game length – this also worked well due to how the shelf was arranged in the room, a larger group of people (say, party-goers) could congregate near the games that could be played quickly; whereas tucked back in the corner were all of the 90+ minute games that could be easily enough ignored unless there were just 2, 3 or 4 of us looking to dive into a longer game.

Now that I’ve downsized. I’m trying to get some Kallax soon, and do some relocation.

But before, I do try to group designers (and some publishers, like Matagot), if possible. As that would make it easier for me to remember things. Otherwise, I don’t mind where they go.

The goal right now is to make them all fit in a 4x4.

I’m trying to get a little more particular in what I buy. Does the game fill a hole in my collection or do something really new or will it just be the 20th worker placement / Euro resource management / deck building / whatever game I have? One problem with that question is my husband and I will sometimes arrive at different answers on the same games. Most of the time we agree, but when we disagree, we usually decide to get it so we end up with more games than either of us would making decisions independently.

Once stuff enters the collection, organization is fun! It’s mostly a matter of what fits where and trying to maximize storage space. There are certain themed areas though within that. Most of the roll and writes or similar are together. Most of the licensed IP games are together, more because I think that’s fun than because It really makes sense and box size still won out for some not being there. Games we play more often tend to be on higher shelves of equal sized boxes and not back in the difficult to access corner space.

Games pretty much only leave the collection through trade. I’d be more willing to sale if there were good local options for that. Online has just never made sense when I’ve tried looking into it as shipping is too expensive.