A new year arise! Time to make those cardboard-based promises!

Mid to heavy weight games from 70 (I think it increased when I got the post-holiday kickstarters!!) to 40
Let’s try this: A limit of 12 purchases on retail/crowdfunding (avging on 1 per month, innit?)

Will have to think how to curate my light / filler games

As with last year, I/we want to play more games, especially new ones, reduce that shelf of opportunity! Already got the ball rolling with Beyond the Sun, should keep it going with Bitoku today, so we’re on our way!

I’d love to get some more players in, too. My brother-in-law and his wife are pencilled in for an afternoon tomorrow, that could be great fun.

As the small box cupboard is no longer overflowing. Keep it that way.

Main goal is to shrink my list of unplayed games. I have far too many that have yet to see the table. Thinking we should be able to manage at least one a month, or ideally two if one of them is on the short/simple side.

And the usual goal of purchasing fewer games, but adding on selling or passing on those that I don’t really need to keep.

The same goal we set every year, Pinky - Sidereal Confluence.

Almost played last August but the group and the timeslot shrunk. I got in Irish Gauge and Red Cathedral but Sidereal got away!

Also: Teach my wife one heavier game that we can play repeatedly. She’s ok playing but hates learning, so we end up playing lighter fare but then need a wider selection to keep it fresh. I think if I could get her to learn Brass or Ark Nova or something that would stand up to frequent table time it would be worth the activation energy.

These are just the 2 most notable ones. Overall my aim will be to end the year with fewer unplayed games on my shelf than I started with: 39 right now.

I’m still thinking about building my own Blood on the Clocktower set with slivers of magnet, coin capsules, and a wipe-clean magnetic notice board.

“Get at least one of my vaguely boardgamey projects to a state where it’s actually usable.”

“Get my games to fit on my shelves” is probably the best way I can summarize my major goal this year.

It will be impossible. Or at least almost impossible. Oathsworn will never, ever, fit in a gaming shelf. I’ve reserved the space adjacent to the shelf for it.

But currently 95% of my games fit on or next to my shelves, and I’d like to deal with that last 5%. Move 'em on or whatever.

I’d also like to play all the remaining games I haven’t played, and finish off the three or four campaigns my partner and I have started but not finished (Legacy of Dragonholt, Tale of Pirates, Forgotten Waters and The Initiative, for example). Finishing the campaigns would let me move those games along to friends, so really, it’s win-win!

“Get my games to fit on my shelves” is probably the best way I can summarize my major goal this year.

I have a related goal… 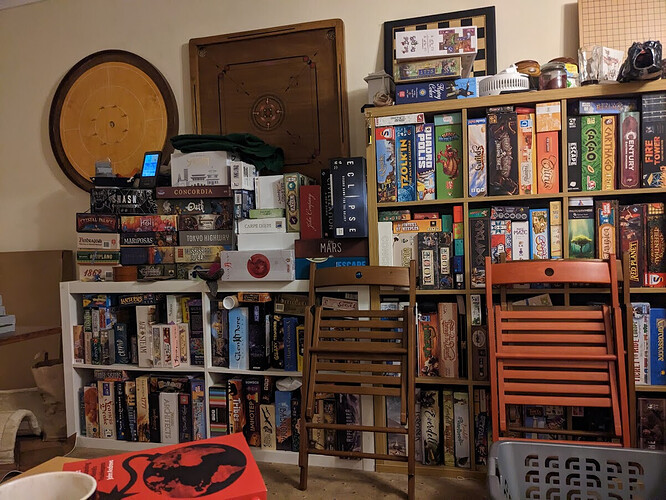 I guess you don’t need that door

The square thing is a carrom board, if that’s what you mean

Oh it looked like the top of an amazing magical door sigh.

Sadly our 1960s terraced house does not have any magical doors

That you know of…

I am still thinking of gaming goals for myself for this year.

Not exactly sure what I want and what is realistic. 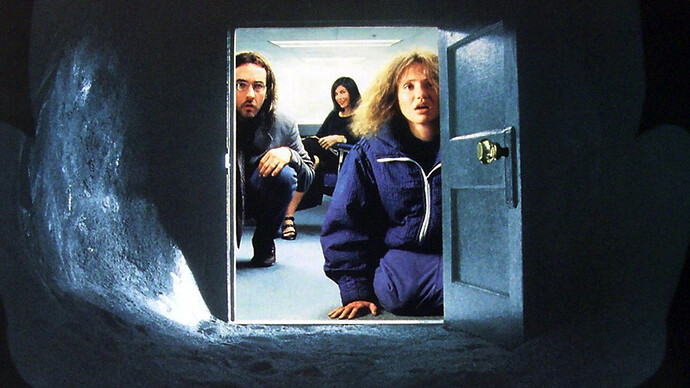 What do you get when you cross a joke with a rhetorical question? Not Games

I found a lion in my wardrobe earlier. I asked him what he was doing there. He replied “Narnia business”. (courtesy of the old forums.)

I think my only new gaming goal (or hope) for this year is to find a new gaming group. For a variety of different reasons the groups I had either dissipated or are no longer very practical, and other than my RPG group it’s mostly been solo gaming for me for a while now. If I end the year with some kind of regular board game sessions in person with more than one other person, I’ll be pretty happy.

In the BeforeTimes I had 3 groups that met between weekly and bi-weekly… a co-op group (they’ve since moved to St. Catherine’s, about an hour and a half drive away), a competitive group (one moved to Newfoundland, a 37 hour drive away, another moved to BC (about 40 hours of driving, mostly through the USA), and a Big Complicated Game group that met monthly (the list of potential players for that group included all the above people, plus about a dozen more, but most of them are at least theoretically still available).