Anyone fancy giving this a try?

I have run several (15!) Firefly PBFs on boardgamegeek, so I have a fair idea of a way to make it work.

Opinions differ on how to start: with just the core rules and map, or with all the expansion material. I tend to favour the full game as long as the players are reasonably experienced boardgamers, but I’m happy to run either version. 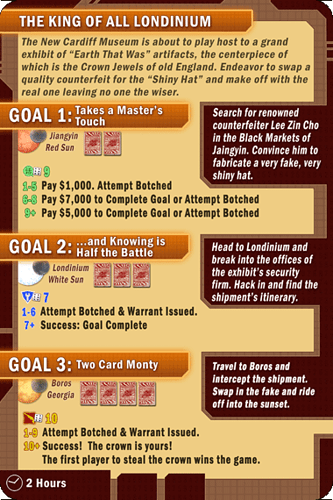 I’d give it a go, although I have no clue of how to play. Will have a read of the rules later.

I intend to do a quick teach as part of the game.

I think I’ll be happily watching from the sidelines as I’m hesitant to take on any more PBFs. I’m eager to see how it plays in this format.

I’d be up for a game. Been a long while since I played Firefly, but I’m sure I’ll pick it up again fairly easily.

Most of the players haven’t.

Any feelings on core game only versus full game?
Core game rules on BGG
My full rulebook: bigdamnrulebook.pdf (85.8 KB)

If you recommend the full then happy to go with that!

OK. So the quick-mode teach. Please refer to the Big Damn Rulebook for more details.

Each player has a leader and a ship. This won’t change during the game. The details of what you’ll do to win vary (with Story Card), but broadly speaking it takes the form of getting jobs, hiring on crew, buying gear for them, and doing harder jobs.

Turns are in fixed player order, and on your turn you take two different actions out of the four available: Fly, Buy, Deal and Work.

Fly: decide whether you will Mosey or Full Burn. Mosey takes you one sector (space). Full Burn takes you up to your Drive Core range (5 on a standard Firefly), but you have to pay a Fuel to start it, and for each sector you enter you have to draw a Nav Card. That can be good but is usually neutral or bad, and can cut your move short. (And if you’re stuck in deep space for your second action, you generally can’t do anything.)

Note that there are three colours of space on the map: blue in the middle (Alliance Space), then yellow (Border Space), then on the outside red (Rim Space). The Alliance Cruiser patrols Alliance Space, which is fine unless you’re an outlaw ship – with wanted crew, or carrying contraband or fugitives, or with a warrant. In Border and Rim space, you get Reavers. What you really want for them is not to be there, but failing that a Pilot and a Mechanic can get you out of a Reaver encounter with a Crazy Ivan, burning a fuel to get away from them. Otherwise it’s bad.

Buy: you do this only at a Supply Planet, the ones with decorated names below them on the map: Meridian, Regina, Osiris, Silverhold, Persephone, Space Bazaar, Beaumonde. You have two options: (1) pay $100 per crew member to give them Shore Leave, removing everyone’s Disgruntled tokens; (2) actually go shopping. You buy fuel for $100, parts for $300, and each supply planet has its own deck. You shop with a Consider 3 / Keep 2:

Crew cost $0-$300 to hire, and you have to pay them that again after each Job or they get Disgruntled. If they get Disgruntled twice they instantly jump ship. Moral crew also get disgruntled if you do Immoral Jobs. Gear is more expensive, but it’s a one-off cost. Most Crew can only carry one Gear, though you can keep spare Gear on the ship.

Deal: you do this at a Contact Planet, with a decorated name above it: Lord Harrow, Mr. Universe, Niska, Patience, Badger, Amnon Duul, Higgins, Fanty & Mingo. You can also get jobs from Harken on the Alliance Cruiser. You Consider 3/Keep 2 jobs from that contact’s discard pile and deck; it doesn’t cost anything. You can hold up to 3 jobs that you haven’t yet started, and 3 that you have.

Work: either start a new Job or continue one that you’ve already started; for example, a Shipping Job means Flying to planet A, Working to load the goods, Flying to planet B, and Working to unload them again. The more hazardous it is, the more you get paid. Some jobs are Immoral; others are Illegal.

If the job is Illegal, you’ll have to pass Misbehave cards; typically these have two options, often with skill tests on them. Some of the consequences for failing tests can be quite bad. I like to have about 4 points in each skill before I try them, but I don’t always manage this.

Skills are Fight, Tech and Negotiate; characters have 0-3 in each. To do a skill test, add up the points for each character on the job (usually your whole crew) and a d6 (which rerolls and adds on a 6: “thrillin’ heroics”). The card that defined the test will tell you what happens.

There are also Keywords on crew and gear (like Pilot, Mechanic, Companion, Grifter, Firearm, Fake ID). These become relevant in Misbehaves and Nav cards: sometimes you’ll have an extra option if you hold a particular keyword, like Crazy Ivan if you have both Pilot and Mechanic.

There’s also bounty hunting, but I’ll go over that when it comes up.

I think that’s the core of it. Two-page summary:
fireflykalidasarules.pdf (59.1 KB)

What do you start with, just your starship and your captain? Any money or fuel to start?

Forget it, I see you start with 3000 credits and there is a selection process. First 3 paragraphs of the rules under SET UP, doh! 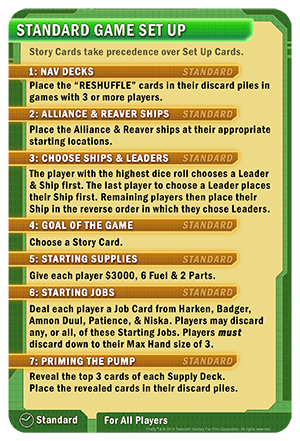 (The “L-YT” means a Leader from the You Can’t Take the Sky From Me deck - not important here, but can be relevant for other sorts of card. Skills are

, Transport, Gun Runner: You may Buy Gear with the “Explosives” or “Firearm” Keywords at half price.) (L-YT)
Monty (

, Moral, Mechanic, Medic, Trade Baron: Whenever you sell Cargo or Contraband to a Contact, take an extra $100 each.) (L-YT)
Nandi (

, Hacking Rig, Pirate: When you complete a Piracy Job, steal $500 from the targeted Rival.) (L-YT)
Womack (

, Grifter, Dirty Slaver: Whenever you deliver Fugitives, you may take an extra $100 per Fugitive. Ths counts as Immoral.) (L-YT)
Zoe (

, Moral, Soldier, Loyalty: Soldiers in your Crew do not become Disgruntled if they are not paid their Cut of successful Jobs. May Carry 2 Gear.) (L-YT)

(The four standard Fireflies are good all-rounders. The Artful Dodger has a slightly smaller hold but can fit one more crew and goes faster. The Interceptor is tiny and you need to specialise in high-value crew, crime and bounty hunting – probably not recommended for a first game, and ditto the SS Walden, which is huge but slow. Jetwash and Esmeralda can only put fuel in their stash, not smuggled goods, but have a good cargo capacity and some other benefits – but you have to pay extra starting cash for them.)

Jetwash (cargo 12 stash 6f crew 5 upgrades 2 drive 5 special Spend a Part to count as Pilot)
Graviton Accelerator V1 (5, +1 fuel for +2 range)
Xunsu Emergency Ram Jets ($600, Discard and use an Action to Initiate a Full Burn. May be used in addition to a standard Move Action.) (SU-YT)
Decoy Nav Sat Cluster ($400, Discard at the beginning of a Move Action to treat all Nav Cards that would normally move a Reaver or Alliance Ship as a “Big Black” card instead.) (SU-YT)
this costs $1,000 of your starting cash

Esmeralda (cargo 12 stash 6f crew 5 upgrades 2 drive 5 special Fugitives may not be seized by the Alliance)
Graviton Accelerator V1 (5, +1 fuel for +2 range)
Caravan Pods ($400, Cargo 2. May only hold Passengers/Fugitives. +1 to Ship’s Max Crew.) (SU-YT)
Full Mess Deck ($400, During a Fly Action, you may discard a Cargo or Contraband to remove Disgruntled from all your Crew.) (SU-YT)
this costs $800 of your starting cash

So every leader is from the You Can’t Take the Sky From Me deck??

That’s right - basically it’s the “cards you pick during setup and not later” deck, consisting of the leaders and the ships’ starting drive cores and starting upgrades.

Can I have Marco and the Esmeralda?

I think I’ll go for Malcolm and Serenity please.