Dreamin' of a War Game Night

I have an entry-level group of gamers here in Amsterdam and we’ve been having a lot of fun with my budding board game collection, however there is an omission, one player requested a game where she could conquer other players, and the closest I have to that is Good ol’ Tigers and Pots.

So I ask of you all, if you could have only one war game, what would you keep to scratch this itch?

How warry do you want it to be?

I still love Onitama, which is quick and light and done in ten minutes, twenty at most. It’s a wargame in much the same way that Chess is a wargame, i.e. not very.

Or there’s Memoir '44 (SU&SD have done a review and a Let’s Play, and I ran a PBF game here), which is one of the many implementations of the Command and Colours metasystem – it’s not very flavourful in terms of the specific characteristics of a particular conflict but it’s definitely a wargame.

Then there are lots of “troops on a map” games – not so much my sort of thing but Blood Rage gets mentioned a lot. Some of these spread out from direct military action to allow conquest by other means too.

It sounds as though you’re after a “wargame in a box” experience rather than lots of collecting and assembling (and painting) armies over an extended period, but you might look over in the miniatures thread for more on that. Some of the miniatures-based games have relatively low barriers to entry.

Does Battle for Rokugan count as a war game? If so, then that

Then there are lots of “troops on a map” games

Cyclades and Inis would be my recommendations in that genre. Probably Kemet as well, but I haven’t played it, so I’m just going off reviews, etc.

Actual conquering of areas rather than just competing for territories? If she doesn’t mind the latter, then El Grande is always a good one.

Otherwise, the thread got some solid recommendations

Dudes on a map games are plenty… if I could keep only one of those it would probably be Inis (review). Because it has the great interplay between with the card drafting and the dynamic map. Also the cards are beautiful.

My personal category that would match closest with T&E and where I would sort it if I would ever convince myself to finally buy a copy is “Meeples on a Map” (also known as Dudes and DOAM for short). Here is the stuff I placed in that category: 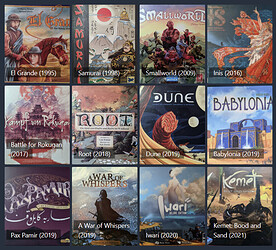 Last I want to mention: War Games are not the same as DOAM games though there is some overlap. Not that I have played anything I would consider a war game so maybe the experts can explain the nomenclature here.

Well, a lot to look through already

Yeah I think she is after crushing your enemies, seeing them driven before you and hearing the lamentations of their laminators … that kind of thing.

Blood Rage, Inis or Dune then (from my play experience those feel the most like there might be a lot of wailing). --There is both an app and a TTS mod for Blood Rage to get a feel for the game before splurging because this is a bit on the expensive side due to the (cool!) minis.

Blood Rage sometimes is considered more of a card game with a board however. Definitely a try-before-buy candidate. And the cards are stupidly small because CMON only knows one card size?

one player requested a game where she could conquer other players

Given the variety of different types and themes of game - even among a “war game” - did you ask her to elaborate on what she had in mind? Controlling one “character”, one “squad” or one large “army” or “faction”? A setting or theme: ancient history, relatively modern (WW2 etc), fantasy, space? What mix of combat, diplomacy/negotiation, area control etc? Length of play? Direct “PvP” battles or more subtle conflict and conquering? Answers to those might help narrow it down even better, especially for a new group.

Ahhh the “Hulk Smash!” type of games. Kemet and Cyclades are solid suggestions by the others here. I need to play Blood Rage.

Academy Games got the Birth of Europe series with 878: Vikings (only this title so far), with the harder to find Birth of America series: 1812: Invasion of Canada, 1775: Rebellion, and 1754: the French and Indian War. Send troops, roll dice, smash.

Other non-area control are like this too, like the Command & Colours system. Memoir 44 is that, but I feel that Battlelore 2nd ed (which is an OOP game) has a friendlier theme.

Of the two I mentioned, I’d recommend Cyclades over Inis as the more mean/aggressive option. Particularly as it has more swingy, dice-based combat. And the option to play with some big monsters.

If you’re interested in something slightly different, then Adrenaline (a board game version of an arena shooter video game) is a great way to be mean to other players without it feeling too bad for them (as you just respawn, etc).

If you can find a copy (as it’s sadly OOP), Dogs of War is also great, but you’re a step back from the actual war. It’s enjoyably cutthroat and you wear fabulous hats.

@gmwhite999 has beaten me with a lot of the questions I’d ask to help frame a response. The only other question is whether there’s a rough idea of player numbers?

I’m going to boost lalunaverde’s 878: Vikings suggestion (or the BoA series from whence it was wrought), if you have exactly 4 players, I cannot imagine a better light-wargame.

His other recommendations are also spot-on, in my estimation.

A lot of people have great recommendations already, but I’d like to add:

Shogun stays on the table slightly too long, but is otherwise a great 3+ “war game” (not wargame)

I think length of the game would be an important parameter. I can highly recommend Battle for Rokugan. I think its deception system works a treat.

Also, I recommend watching gameplays to see what could be your group thing. I have watched 878: Vikings from SUSD and looks very good.

I have nothing to offer except reinforcing (

) the recommendations of Memoir 44, Cyclades, and Battle for Rokugan.

The tricky thing with Memoir 44 is that it really needs two copies to be played above 2-player properly (you can play base game Memoir 44 with 4 or 6 players but it’s a bit cramped).

Cyclades and Battle for Rokugan are relatively complicated for newbies compared to good old M44 though.

Not long now until the reprint of Tyrants of the Underdark which is really excellent. The deck building makes each player’s game different but it stays tight even and aggressive throughout. And as a bonus the reprint should have better colours too.

Looking forward to this one myself.