Picking this up from the Kickstarter thread and the conversation between @pillbox, @yashima and @mr.ister. Pillbox wrote:

If you’re interested in a 18xx game and you don’t care which one (because you just don’t know the difference), 1846 is usually readily available anywhere you buy GMT games

I think 18CZ is likely a great entrypoint for anybody.

Cough I have a friend Cough who’s interested in trying an 18xx game. I did find, err I mean my friend, found a post on Reddit that suggests either 18AL or 1889, (also mentioned by @pillbox) are where to start. They are both apparently ‘simpler’ examples of the genre and both are PnP so the cost of buy in is pretty low.

So the question is - should you start with one of the games mentioned above or maybe something else?
As a supplementary question; both 1899 and a stretch goal of 18DO allow for a 2 player game, would this be worth playing?

!%#@$% those guys (within the bounds of law, of course). I haven’t played it yet, but I’ve watched a video of 18CZ’s 2-player mode that introduces a bot player that is jointly-controlled by the players. Heavy Cardboard did a play through with the bot, Vaclav, and it seemed to be a very good experience (they both said they really felt it was a full 18xx experience).

1889 is often touted as a “2 player friendly” version of 18xx because it’s a tight map with interesting (read: challenging) terrain. I never remember, but 18AL may have glaring defects? (Maybe I’m actually thinking of 18GA… Alabama… Georgia… who can keep those states straight in their heads?).

I do think most 2-player experiences in 18xx will be fundamentally different in texture to 3+ player games, which is also how I feel about 2-player euro experiences vs higher player counts (head-to-head as opposed to free-for-all; more players = more noise = more interesting problems without, necessarily, your opponent having to directly interfere).

1846 has quite a few differences and is often considered more "euro"y than 1830-alikes.

18CZ is by Lonny Orgler and Lonny’s games all tend to be similar in feel; a lot of things are streamlined. The major commentary about Lonny’s games are that they are “operational” style games and not “stock market shenanigans” games; you tend to win Orgler games on the map during operating rounds whereas 1830-alikes are typically won in the stock market rounds.

I’d like to vouch for 18Lilliput a bit. While it’s not really a full 18xx experience it is fun and does sit outside the euro bracket enough that it got me out my comfort zone to get a taste for the 18xx experience. Having now played 3 games of 1889 I think there is enough value there to justify as a bit of away across. Also it’s £30 so a more affordable taster. Also, it’s fun. I enjoyed all my plays of it and would happily play again almost any time.

2 player maybe isn’t the best light, but it might be better than not playing at all. Another point I wonder at is do you only need simpler learning games if it’s a mix of vets and newbies? So the brutality that will happen is over faster… if you and a group of friends are up for exploring together even the most subtle titles might not being a problem as you won’t all be doing the awful things to each other without the knowledge experience.

One of the things I found with 1889 was I could interpret the rulebook more easily than that for 1846.

A key advantage for 1846 is the draft stops the first play I don’t know how to value this so the game can skew issue from tanking things as much at the start. Something I’ve been pleased to see is in 1824, which I think will be my first post lockdown irl game. It looks fun and approachable.

So I think maybe don’t worry about getting it right and dive in to something you think looks fun except maybe the brutal ones like 1822 or 1817. Also consider 18Lilliput!!

That’s a fantastic summary by @pillbox!

I just recently got interested in 18XX, so I’m far from an expert. I decided to start with 1889 for a couple of reasons: i) it’s based on 1830 the somewhat default 18XX, so it’s a good entry point to the series, ii) there’s an absolutely beautiful PnP on BGG, which I am currently trying to construct, and iii) there’s a fantastic online implementation on 18xx.games if you just wanna give it a try.

If heard that 1846 is an excellent design, but it’s not that representative of the genre (or maybe just of the 1830-branch?).

That said I have no idea how any of those games play with two.

If heard that 1846 is an excellent design, but it’s not that representative of the genre (or maybe just of the 1830-branch?).

1846 is a significant departure from 1830. It uses a 1-dimensional stockmarket (A lot of 1830 and 1830-alikes are focused on getting the most out of your shares in stock rounds by manipulating shares in 2 directions; having a 1-dimensional stock market limits that) but allows for multiple jumps along the track based on how much the company pays. It uses incremental capitalization (you inject money into the company whenever a new share is sold) instead of full-capitalization (when a company sells its 5th share, you get ALL of the money). Laying 1846 tiles typically costs money as opposed to 1830 where the tiles are primarily free. 1830 and most 1830-alikes use a “waterfall draft” for privates whereas 1846 uses drafting. Companies can close in 1846, whereas in 1830 they cannot (and will drag their president down into the grave with them; this is often how games of 1830 end - player bankruptcy)

Is this the new Train games thread? YES!

That’s a fantastic summary by @pillbox! 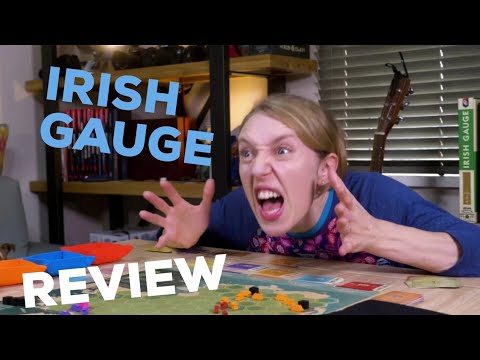 I would probably have picked up a copy but it looks like it’s completely out of stock everywhere.

I think Capstone will keep Irish Gauge on shelves consistently for several years; it’ll be back - they have small print runs… But they will keep coming

Ride the Rails + exp and Gulf, Mobile, and Ohio are an insta-buy for me. Love Irish Gauge. Also Im glad that there’s Capstone and Rio Grande, mainstream publishers, releasing Cube Rail games now, other than Queen.

Cube Rails is something I have decided that I want to invest time and money on.

Is this the new Train games thread? YES!

This thread and, specifically, this comment made me think back to earlier days (much easier to reminisce about past memories than future ones, after all). I recall watching SUSD’s review of Trains way back in the mists of time where he prefaces his review by mentioning the odd relationship between boardgaming and “train games”. I think he mentioned both crayon-rail games (which I have grown to adore in the last year and a half, though I don’t know if they have necessarily aged well… I still love them) and 18xx games when he makes a joke about running out of numbers~

At the time I watched the video, I thought to myself, “wow, boardgaming has come such a long way!” and I was thankful for not having encountered such stodgy games on my journey towards the dark heart of boardgaming. Little did I know that my journey would lead me straight into both of those categories and that I would be smitten by both of them.

I’ll take this opportunity to ask again, if anybody would be interested in playing a game of 1889 (or maybe 18Chesapeake) on 18xx.games?

18Chesapeake is in testing on 18xx.games but I’m more inclined to give that a try. If we encounter a problem, we could drop the game and do 1889 instead.

On the basis that you can live with the fact that I’ve neither played a boardgame on line nor an 18XX game, then I’m in as well.

Ditto. RogerBW on 18xx.games. I know absolutely nothing of the rules: what should I read?

Do you prefer to read or watch? (rulebook vs video explanation)

Also, it depends on which game we want to play. It sounds like there may already be 4 interested so I think I would suggest 18Chesapeake

I just remembered that the 18xx.games tutorial uses 1889 and it’s actually pretty good (for a tutorial built into a website)

Heavy cardboard did a The Teach in their 1889 stream. If I recall it was pretty good and covered some 18xx generics: 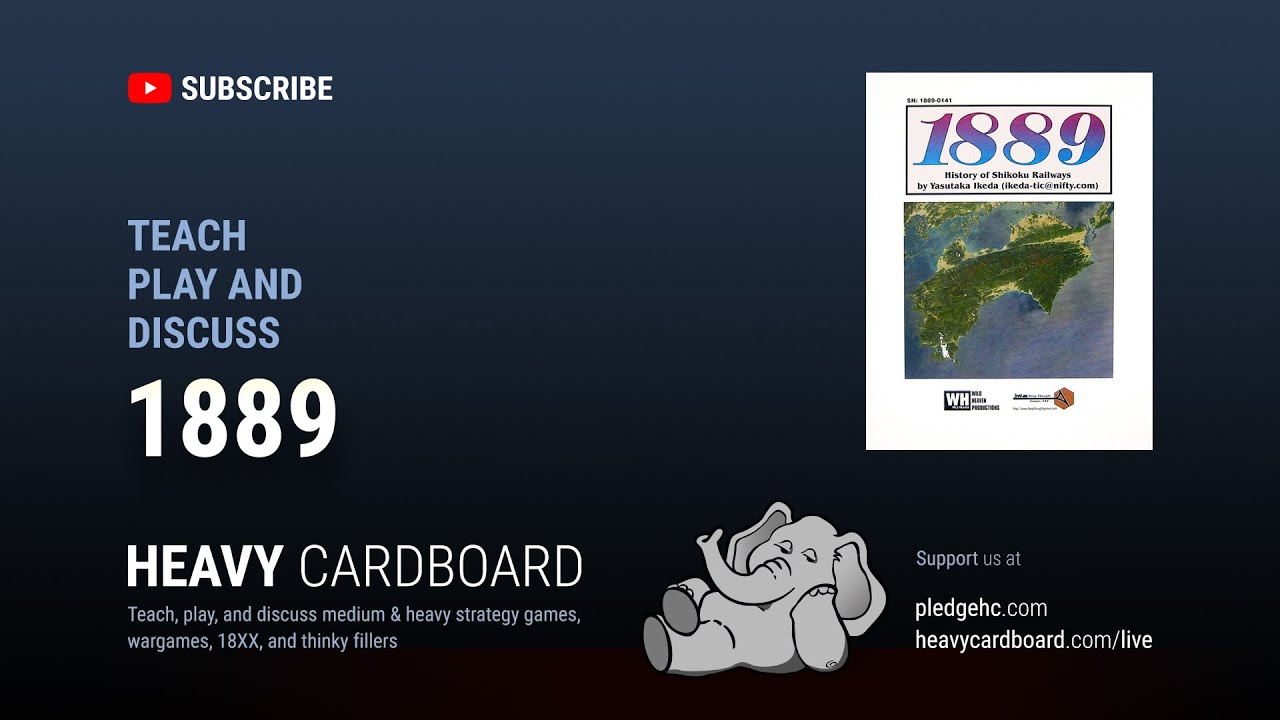 I learned 1889 through that HC video (teach plus a couple of rounds of play) and the tutorial on 18xx.games and that worked out pretty well. However, I should mention that the tutorial focuses on the basic concepts and the interface, but I don’t think it’s exhaustive ruleswise.

My 18XX experience comes down to a single game of 1889 played on that platform. I would gladly play that again, just because I barely got my feet wet. But if people would prefer 18Ches, that would be fine too.

Full disclosure: my experience with 18xx is a single game of 1889 played on TTS, 2 solo games of 1862 (using the Patience/Klondike-like solo mode which is very interesting), watching a number of 18xx videos on Youtube, and reading as much as I can about the genre. I’ve owned 18xx games for a little over a year and I only first learned how to play them following Francis Tresham’s death in Oct 2019.

Alright, since I don’t hear any objections, I created a game on 18XX.games (#1473, susd (private)). Just join the game and we’ll start whenever you are ready.

I’ve joined up. For the new players: I’m happy to provide any amount of The Teach or answer any questions you have about the game. Don’t be intimidated, 18xx isn’t nearly as scary as people make it out to be.

1889 is the one that intrigues me most, I know it’s available PnP, but is it in print anywhere?

Has anyone done the PnP? How does it work?