A question for the more experienced among the hive mind.

I love worker placement games but have only played them solo until now. I have a few friends who I have started playing games with over the last year or so and think they might be ready for new mechanisms.

What are your game suggestions for an introduction to worker placement?

I currently own Architects of the West Kingdom, Le Havre, Nusfjord and Viticulture. All of which I love but feel they may not be quite right to introduce the genre to relative beginners.

Stone Age is one possibility, and maybe Lords of Waterdeep too although I don’t think the theme of the latter will work with my players. Does anyone have other suggestions - or experiences of teaching such games to newer gamers?

Those last two are definitely some of the foundational worker placement games – both of them old enough that at the time they came out it was a relatively new mechanic, and so they could rely on it as the primary mechanism.

On the podcast, Quinns raved about Little Town as a beginner worker placement game. 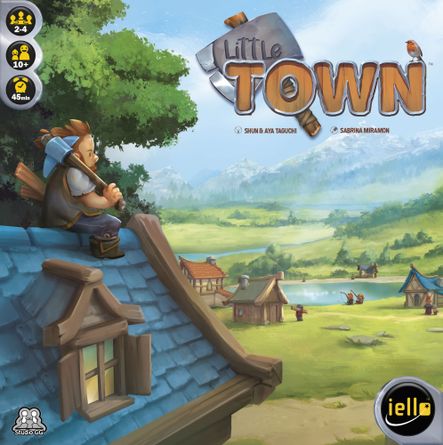 In Little Town, you lead a team of architects and must dispatch workers to the town, collect resources and money, build buildings, and develop this little town. In the game, which lasts four rounds, you can acquire resources such as wood, stones,...

I got it in a trade but haven’t played it so can’t vouch for it.

Fwiw my first WP was Raiders of the North Sea

I think Lords of Waterdeep is a good shout. Like Roger said it’s straightforward. I sold it many years ago now, but I really enjoyed playing it when getting back in to games so still think of it as a good step along the way for me.

These days my favourite is New Bedford. A bit under the radar but it does lots really well. The base game is straight forward for teaching new players and the expansion adds replayability in spades. I think with new to games gamers then the base game probably has around 5 plays before you’d want the expansion but with experienced gamers probably only 1 or 2 pre expansion. Small box too.

I would say put theme first before the game. I feel like newbies who are eager for modern board games won’t really mind about the mechanisms for as long as they are easy to internalise. So Lords of Waterdeep is an excellent one if they like fantasy

Personally, I always found Lords of Waterdeep a bit on the “too much going on end” but that may be because I only played the app.

If your friends have played a few modern-ish boardgames I would really try out Architects. 1) you already have it and 2) you know it well and 3) it really isn’t that complicated and 4) it has a perfectly nice neutral pseudo-history theme with a pretty clear and readable board.

Agree with most of the others mentioned here so far. If looking for a two player, I’ll add Agricola:ACBAS to the list. Very straight forward, and a fairly typical worker placement adapted well for two players.

Thank you so far for your thoughts, everyone.

Most likely I will get a copy of Stone Age over the holidays but will look into Little Town too. Much as I love fantasy, D&D and the Forgotton Realms, the theme of Lords of Waterdeep is not one my current group are into from our discussions on films, books etc. Shame there isn’t a Lovecraftian version though as one of them is into the Cthulhu mythos.

In terms of what I already have, I may try Architects of the West Kingdom too. The theme of Viticulture would probably be the most relatable to them, and the small number of resources and options in Nusfjord might be the easiest to get their head around from a building/economic aspect, but the fact that Architects… does not have many spaces which could block other players from their actions will help get them used to the genre without them feeling stuck for options.

Just a quick aside:

As somebody who works at a game store (I am so sorry for all the regulars that have to read me saying that every… week? Three days? I say it a lot, I’m sorry, I just want to put my bona fides out there), I would usually recommend the following as good entry level Worker Placement games:

After those you can get into the “top 5” worker placements pretty easily (Viticulture, Lords of Waterdeep, Yokohama, Feast for Odin, Concordia). I personally like the Architects/Raider lines as well, but I don’t think they’re quite strong enough to break into the top spots, but YMMV.

As an aside: our store (one of the 3 largest in Canada) is currently sold out of everything except the Century series that I listed. Like, all of them. T’is the season and all that! Good luck!

Nusfjord (it’s one of Uwe’s newer worker placements, and as a result it is more forgiving than Agricola or Caverna et al)

My personal experience with Nusfjord is: I love it. However the one time I tried to get my gamer friends to play they ran screaming because it looks so busy when you put it all on the table at the same time. I suggest if you go for that one to teach yourself a good teach to avoid this and begin teaching while slowly setting up each board so it is not so overwhelming, because it really isn’t that difficult a game (as we here all know)

Nusfjord is often comically cheap in the UK (sub 20 quid)

Funny that, I didn’t think of Concordia as a worker placement, but more as a networking game… but I see your point.

It really depends on the definition of worker placement. I think the general design space of the mechanic has opened up quite a bit since the early days when Agricola was still young and mean. (Now it‘s old and probably still mean)

And sometimes sometimes on BGG people get a bit carried away adding mechanics. When I looked through my games that have worker placement, Parks and Kanagawa came up and I am reasonably sure that‘s not what @gmwhite999 was looking for—although both are relatively rules-light games that are welcoming enough.

I’m but a mere pup when it comes to board games compared to the more eminent posters here, but have you condidered Lost Ruins of Arnak? Granted, worker placement isn’t the only mechanic involved, but the game is fairly simple, really fun and gorgeous.

Reykholt (also Rosenberg) is v simple and puts out some nice “think about this first” design.

Also I quite like Agricola all creatures. It’s only 2 player but feels relatively small (although I think this one gets nasty)

Something like Charterstone might also work. It’s a legacy but it leads you through to a full worker placement game by starting off with an ultra basic one.

Oooh, that is a great recommendation! I personally find Charterstone too light for exactly the right reasons in this case: it breaks up the game into 10 smaller pieces and introduces each of those to you one at a time. It slowly builds up to a big, chunky game, but in an utterly delightful and light way!

†: you also place girders and beams

(I think someone had a clown for breakfast)

Making the world safer, one clown at a time. [burp]