What do boardgamers collect? Dice!

So… I may have a dice problem. Not the sort where I have 200+ in the house, just that I consider them beautiful objects I’ll pay money for.

My latest kickstarter update wasn’t for a game I backed, but instead for some handmade D4 dice (which okay, are technically a game too but I’m buying them for the dice). ( https://www.kickstarter.com/projects/2132900266/chamboulde-a-new-game-with-five-d4 )

And my favourite D6 is made out of frickin’ AMBER 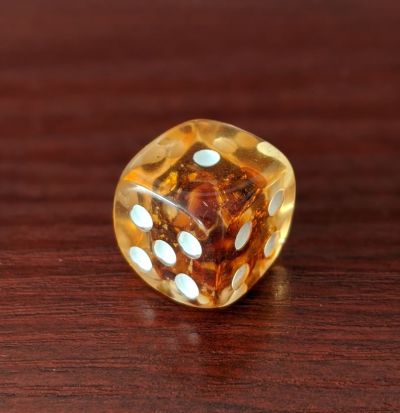 Anyone else got a dice problem?

Do you need the latest box of metal D20 sets? (Okay, I have one). Have boardgames meant that your D6 collection is now the size of a shoebox?

Well, my usual travelling dice are metal and stone. A few years ago, I spent time designing a bunch of custom d6s and getting them made by Chessex. Photos here.

Awesome! Yeah, stone dice in particular are definitely going to hurt my wallet in future.

You’ve reminded me that my “travelling dice” are a small box of 5 thuya wood D6s. Thuya wood smells amazing. I wrote a book on dice divination which they’re perfect for, so if I have any “pocket dice” it’s usually those.

Those are amazing. Are they standard size?

They’re mostly 16mm; the few larger ones are obvious.

Some of these came from a conversation in which I complained that “logo dice” always had the logo replacing one of the numbers (and the USA uses the opposite convention from Europe). We ended up coming up with the idea of using the logo as a pip.

I’ve got lots of dice. D6s in bright colors, full D&D matching sets in a variety of hues, random dice of all sizes in non-matched sets in an even greater variety of hues. Those are all just put away in various bags and pulled out when needed. I have a few that sit out on shelves in my game room more “on display” though. There’s a few sets of Rory Story Cubes. Then there’s an old set of poker dice, two D6 from Vegas with my husband’s name on them that his parents got him as a souvenir (they tried to find ones with my name, too, but no luck), and three D6 with the sixes replaced by icons representing stuff from songs by The Doubleclicks, a sibling geek folk duo I love. Should have three more of those soon after backing their Kickstarter for their next album recently. 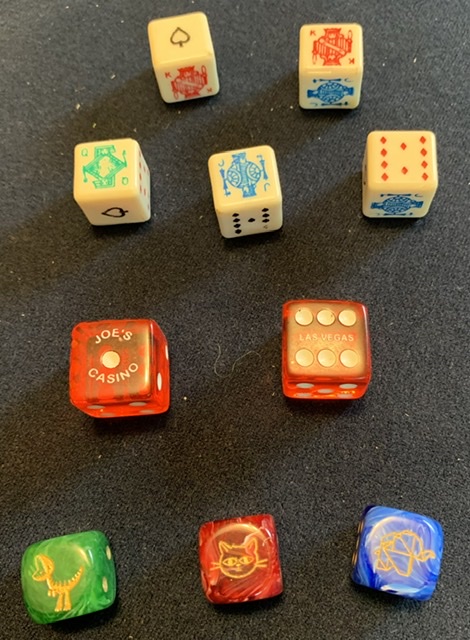 My copy of The Ultraviolet Grasslands just showed up. Who needs readability or contrast? 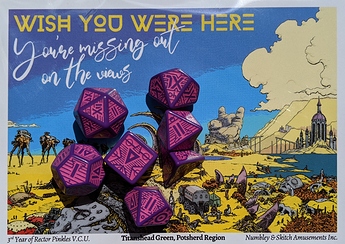 Oh, the laurel wreath and fleur-de-lis ones are amazing!

Those are both parts of national sets, produced for a role-playing (GURPS WWII) campaign:

The laurel wreath is in the Italy set, along with a white star on green, and the white cross on a red shield, the symbol of the House of Savoy, who united modern Italy.

The fleur-de-lis is in the French set, along with the blue cockerel on white and the white Cross of Loraine on red.

All right, you asked for it*: the guided tour of Roger’s dice box. It is indeed a classic Rolykit. (There’s another model with a squared-off base and more capacity; if I ever see one going cheap I’ll probably buy it.) 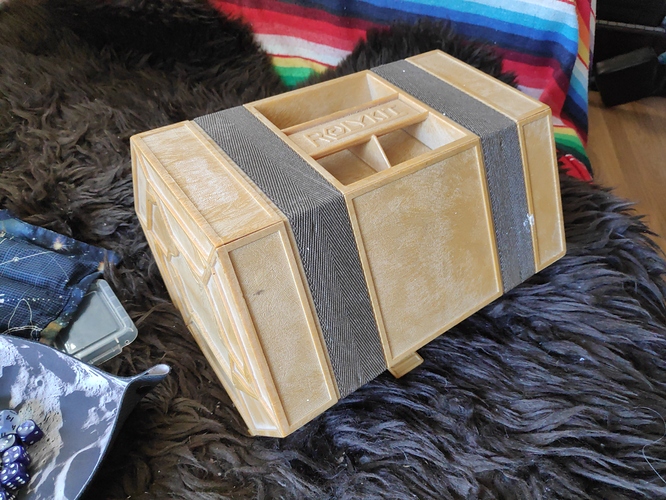 IMG_20200520_1338094032×3024 1.82 MB
Row 1: generic gem dice, some of them sparkly.
Row 2: more of John’s custom-printed dice (including the pirate dice, probably my favourite in terms of how they came out looking); orange Schlock Mercenary custom dice; overflow of gem dice.
Row 3: poker dice; the red-and-blue d6 set I got when I was running GURPS Torg; metal dice (some hard to read but they all look lovely); d6s from Salute, I think, but I have no idea where the red and orange ones have got to. 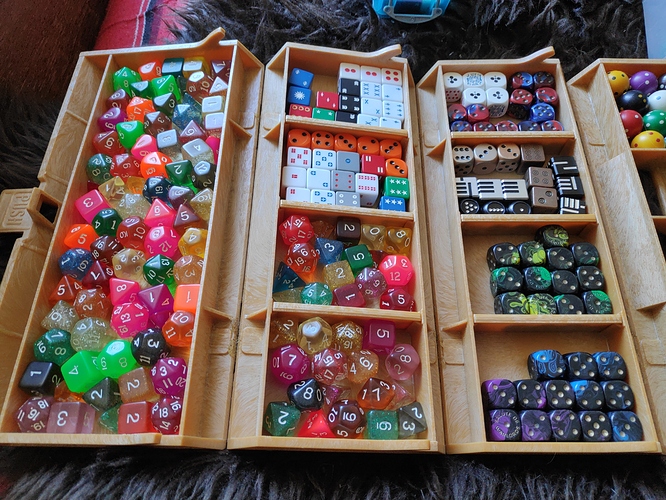 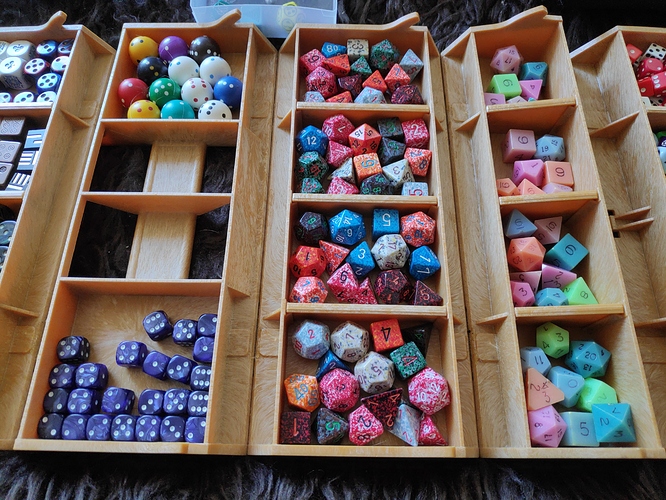 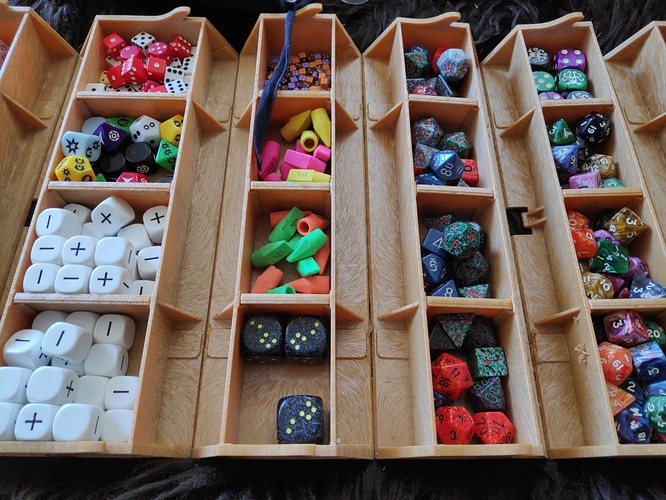 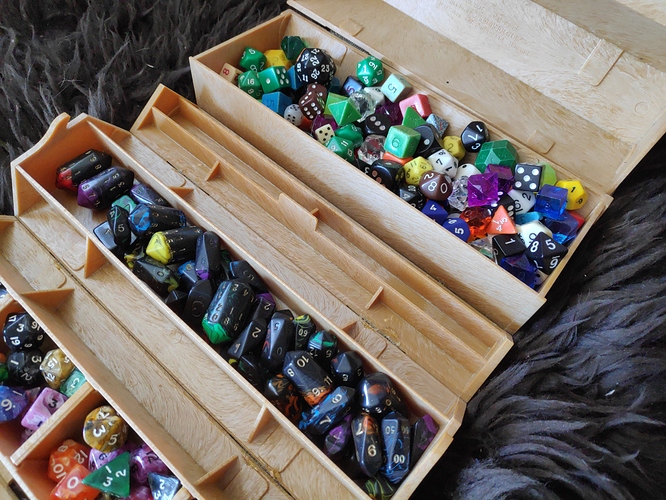 IMG_20200520_1337084032×3024 2.06 MB
Overflow; dice I use quite often. More of John’s custom prints (all right, they are for a WW2 game, but we didn’t fancy swastika dice even so); and the Battletech/Vampire mixed bag. Because I was playing Battletech with a chap who was a ferocious time optimiser, so he liked tagging moved units with d10s so that you could immediately read off the target modifiers, and rolling multiple to-hit d6s of different colours at the same time; which meant that when I recently joined a Vampire game I already had a lot of d10s. 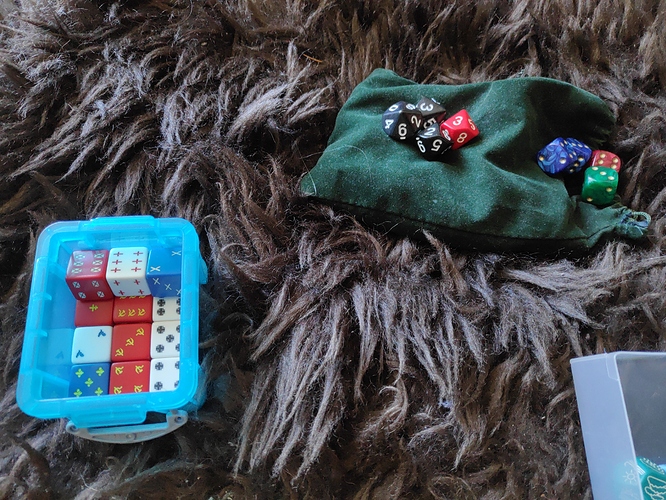 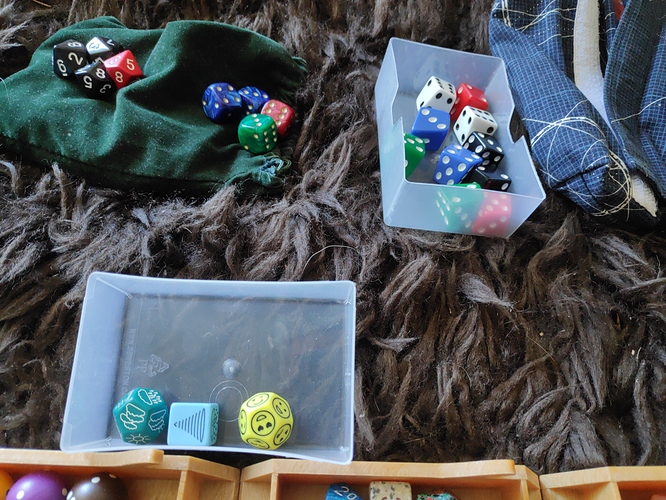 IMG_20200520_1337194032×3024 2.54 MB
It is apparently a requirement that you have an All Rolled Up if you are a roleplayer in the UK. To be fair, they’re really very nice. I don’t like most of their fabrics, but if you get custom fabric printed they’ll make them up for you… anyway, a Chessex poly set, some small d6s, and some d6-as-d12 which are my go-to dice simply because they roll comfortably. 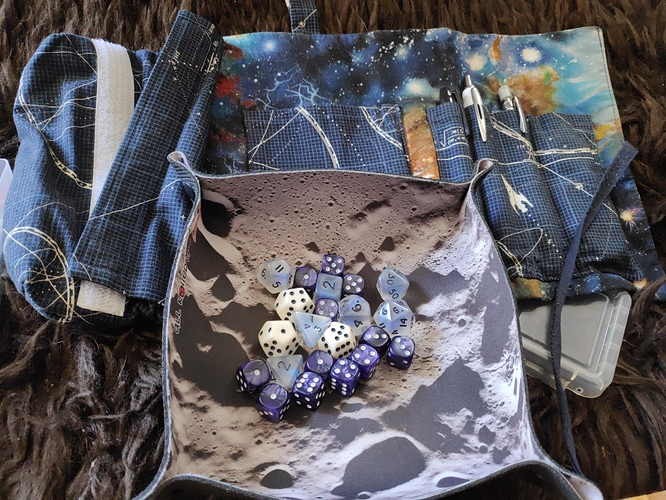 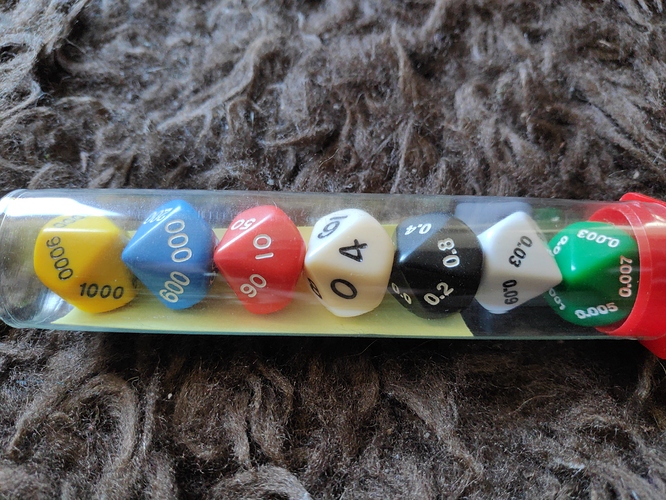 I really like the dice with the linear hashmarks in the first photo (middle of the far right row). Where did you get them?

Those are “Ako Dice I”, which I backed on KS (the part-spherical ones in the same tray are Ako Dice II). They are now available via https://www.ako-dice.com/ .

I have to go now, the UK police are hammering on the door.

Something to do with not having a dice tray.

I’m sure it will be f

Calling it. @RogerBW’s house is actually constructed of dice, he’s just not fessing up to it.