Same here. Although (this comes from my wife as she reads a lot of stuff and theories about the Marvel films), apparently Ragnarok was almost a set up to this film - it was the film that Taika Waititi wanted to make

Caught up last night with Netflix, and attempted to watch MIB International, which I failed miserably. I fell asleep after, say, 40 mins? Not sure if I could blame the movie or my tiredness. Funny that, now that I don’t get up at silly o’clock with the new job, I am still knackered in the evenings.

After a cup of tea, I decided to try Prime instead, so I went with having a laugh with Ryan Reynolds, Samuel L. Jackson and Salma Hayek on The Hitman’s Wife Bodyguard. I think they were going for a record with the most swear words per minute with this one. It was funny at times, entertaining, but not much more. The highlight was seeing Samuel L. Jackson and Morgan Freeman together on screen, if briefly.

Having finished watching The Umbrella Academy, Stranger Things, and The Boys…
We’ve moved onto the Night Sky, which is a complete change of pace with two older adults as the central protagonists with mystery and portents that the world is not exactly ours.

It’s Tina’s regular Monday movie night, which involves watching something with a group of friends online. Ordinarily I leave her to it, but tonight it really is rather warm… so here I am in the coolest part of the house, the Murder Basement, sitting through Beetlejuice.

Finished quite late at work yesterday and I was not in the mood to arrive late at Games Night (and possibly have to wait for the first table to finish their long game) so we watched The Man from Toronto on Netflix. Silly, very silly, but a few bits were very funny, Kevin Hart had us laughing out loud quite a lot. Just what I needed, something light and distracting to have a laugh with my better half.

I just watched The Legend of Vox Machina without knowing anything about it. It was quite entertaining, and I immediately got the impression this was a series of D&D roleplaying sessions turned into a TV series. It totally is, and apparently a huge Kickstarter success story.

After watching Umbrella Academy Season 1 way back… we got back and watched Season 2 and 3 over the last couple of weeks after a colleague reminded me they existed.

It was quite enjoyable. I like timetravel stories more often than I don’t and this was one of the more interesting takes on the topic of paradox. There will have to be another season, right? The ending is far to inconclusive…

I have played nothing for about three or four weeks due to a really busy work schedule leaving me knackered in the rare evenings I got to stay home - plus a bout of what was probably Covid leaving me totally shattered for four or five nights too. That has lead to to watching far more tele than normal, so I caught up on some of the Marvel television shows that had so far totally passed me by. Ms Marvel was a real joy with some great visual style and characterization; Moon Knight was great too - that “other” suit was hilarious but also perfect for the persona - and Loki had some lovely moments - deep joy seeing Richard E Grant. The Falcon and the Winter Soldier was much as expected and pretty enjoyable although I quickly got bored with Hawkeye. I saw a couple of episodes of What If? and still have to start WandaVision but am really looking forward to She Hulk.

Also, as a long term gamer, the trailer for next year’s Dungeons and Dragons - Honor among Thieves film was wonderful, full of great touches and potential for its release.

(My opinions: ) Hawkeye gets better at the end, and you really need to watch every episode of What If… - they’re connected and have a big payoff.

Also, cannot WAIT for She-Hulk after that recent (much improved) trailer.

you really need to watch every episode of What If… - they’re connected and have a big payoff.

But you’ll still be confused because the ending contains characters from an episode that got shunted to season 2.

Hawkeye gets better at the end

Hawkeye was enjoyable for every character other than Clint. The MCU/Jeremy Renner version of Hawkeye has always been terrible and, while it’s improved in the series, it weakens the story it’s adapting. It becomes a story about Clint cleaning up the mess he made by being a terrible person, just so he can forget about it.

I binged For All Mankind until I caught up to the new episodes. I’m now on tenterhooks for the next one.

Here’s my favorite moment of the series so far, and as an unapologetic Reagan Republican, I have to say that it is GLORIOUS. 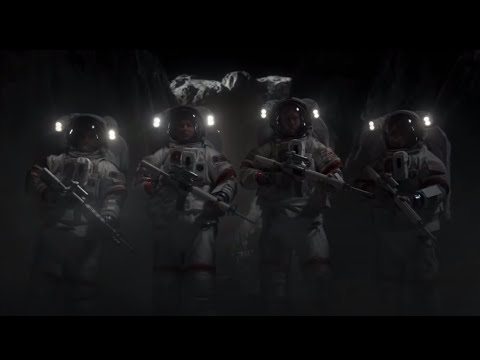 As I eagerly await the next episode of For All Mankind, I decided to see what else Apple TV+ has to offer. I started Severence and, two episodes in, I have to say that I am really enjoying it.

Watched Dunkirk at last on Netflix last night. Interesting movie, if the acting seemed a bit stiff from everyone. I know it was a dire situation, but I wasn’t very convinced by some of the performances. Which let down really good ones (like Tom Hardy with how little he had to work on inside the cockpit, or Mark Rylance on the small boat)

Then I had a go at Sandman. It had been a very, very long time since I read some of the comics (early 2000s) and although I always loved what I read (borrowed from a friend on my early days in the UK) I always had a feeling of discontinuity, as I had never read the earlier ones. In that respect, I have enjoyed the two first episodes, which really set up the scene (how well they do it bigger fans will need to corroborate as I had no clue about the beginning of the story). I think the production quality exceeded my expectations; if anything, I always imagined Morpheus/Sandman voice a lot softer, like a whisper nearly, but I quickly adapted to the rougher tone he has in the series.

I enjoyed Sandman. I mean, I wasn’t disappointed by it, which is quite an achievement.

We watched the first season of Only Murders in the building and that is a fun one! It is about some people doing a True Crime podcast about a murder in their building. It is combining crime show with a lot of comedy and does that very well. It is a little bit different than other crime shows and we enjoyed it a lot.

We need to get back to that one. Watched the first 3 or 4 episodes, then just stopped watching a lot of stuff (I blame the kids) and lost track of things.

My wife and I are watching Better Call Saul, though with different experiences (I thought it should’ve wrapped up with Lalo’s fate, personally - that felt like the climax and everything afterward feels a bit drawn out to me, but she’s loving the advancement of Saul’s story).

We’ve also been re-watching some Bluey in bed at night. It’s a great show, and one of Aus’ best exports in awhile!.

The Sandman, I have no familiarity with the source comics, but I’m about halfway through and it keeps pulling me back. My only real critique (apart from the weird sequence in the diner…) is that Morpheus reads as fairly one dimensional angsty immortal goth most of the time, I hoping he’ll become more fleshed out in the second half.

Blown Away, still my guilty pleasure reality TV draw. This season has been fun so far. No one I dislike as much as some of the previous contestants, but I’m still not 100% sure who I’m backing to win - I flit between a couple.from ep to ep.

The Owl House, ooh almost forgot the best one of the bunch! The second half of season 2 is now out of Disney+, I’ve not finished it but one episode and I was sucked back in straight away.

My wife and I are watching Better Call Saul, though with different experiences (I thought it should’ve wrapped up with Lalo’s fate, personally - that felt like the climax and everything afterward feels a bit drawn out to me, but she’s loving the advancement of Saul’s story).

Yeah, the stuff happening with “Gene” isn’t that interesting. I would have rather followed Kim.

My only real critique (apart from the weird sequence in the diner…) is that Morpheus reads as fairly one dimensional angsty immortal goth most of the time,

I think that’s fair. He needs his popular sister to show up.