The recent topic on SU&SD’s Tom’s board game collection and comparing the overlap between my collection with his and the other SU&SD team lead me to this thought: what games do I own that no one else here has?

My memory is diminishing, but from my couple of years here I don’t recall anyone else mentioning the following titles I own: (updated)

I appreciate this list may change as others may prove to own them, so I am happy to scrub titles off this list delighted in the knowledge that others share and play them, but with so many older out-of-print games around, many longer-term gamers must have some real treasures in their collections.

Leaving aside any self-made games, what commerically-released games do you own that you think may be unique to your collection and have zero-overlap with other members of this forum?

Here are the board games which I thought might be uncommon, and which I also couldn’t find other people mentioning in the search. I’m confident that others will have some of these, but who knows which ones?!

My oldest games with (possibly) the least overlap would probably be Warrior Knights and Chainsaw Warrior, both old Games Worksop games. Not sure I have anything more obscure than that, although I have the original Robo Rally with the lead robots, as you can see by my profile piccy.

I am going to guess Quest for the Magic Ring, an old roll and move based on Lord of the Rings, and World Monuments, a game my wife found for cheap and got me as a gift years ago. Oh, and a game called They Who Were 8, also a random gift from my wife. The latter two we have yet to play. The first was a nostalgic game from high school that a friend found and gifted to me. Also unplayed, but it’s not really that good of a game, but I love that I own it.

I’d guess that the least likely for crossover are Frenemy Pastry Party, SHASN, and maybe Cathedral.

My least which includes some that are likely to crossover but I can’t recall too much by way if chatter around is:

~~ Attika ~~ @pillbox has US telegprah

First Class: All Aboard the Orient Express

Legend of the Cherry Tree that Blossoms Every 10 Years

I used to own GW’s Warrior Knights about 30-35 years ago. Only played it once or twice and loved it but was too long and complicated for my group at the time so I sold it sometime in the 2000s when having a clearout. If I had a suitable group these days, I’d consider looking for a copy.

I have happy memories of playing it, although I’m not sure how well it stands up now. I’ll have to bring it along if we ever have a tekeli-meet!

If we were talking obscure gamebooks, I -might- be in with a chance.

I can’t recall seeing anyone talk about Globbo, Allen Varney’s game about exploding alien children and their murderous amoeboid android babysitter. Having typed that sentence I think I can understand why. Must break this one out again, I think it’s in storage at the moment. 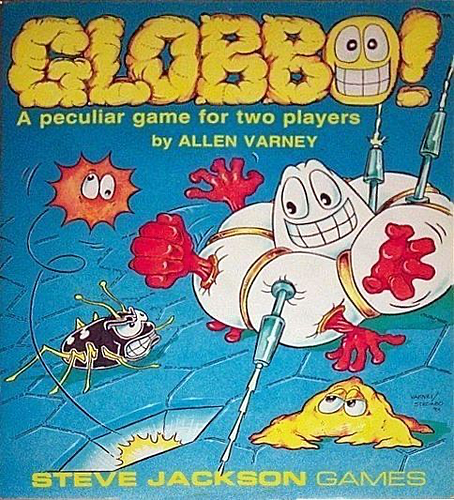 I used to own this. Limited communication coop that was published around the same time as Hana Bi which my group always preferred. Gave it away because at a min player count of 3 it was not seeing the table especially not after The Crew was published.

I have played The Climbers. Didn’t click for my wife but I thought it was really good

I have this and it’s one of my most recently played games.

Looking at my collection, the ones I haven’t heard mentioned fall into a few different categories.

Red Raven games other than the usual ones: The Ancient World, Artifacts, Inc., City of Iron, Deep Vents, Empires of the Void II, Klondike Rush, Roam

(There’s also Realm of Sand, but I’ve seen others mention it. And Walking in Burano has just been disqualified.)

And a couple of Button Shy games I haven’t seen anyone else mention: Find Your Seats, Handsome

Because they are old:

Because they are obscure:

Because they are too weird?

Newish Games that may just not have made it anywhere:

Trains and rising sun are two that I also have. Also walking in burano.

Damn there goes in security. Also had 10’ to kill but sold it.

Leaving Earth is an obscure game, but I know a bunch of people on here have it. This includes me

It’s just so big, I don’t play it often. But it is a game my partner LOVES… I am sure if I asked him right now, he’d drop his PS5 controller to play.

I am sure if I asked him right now, he’d drop his PS5 controller to play.