This is the thread in which @Captbnut will post screenshots of the current board and hand, and in which players can discuss moves. I will not view this thread for the duration of the game.

I’ll be using a custom Vassal module to run the game and play one side without seeing the hand of my opponent. It’s a bit experimental and not something I’ve tried before, but it should work.

There will be a companion thread that I will write in parallel with this thread, detailing my moves and the reasons for them. Of course, anyone making suggestions in this thread should not read that one until the game is over.

This is going to be an interesting (and hopefully not too short!) experiment

@Chewy77 @pillbox @COMaestro are going to learn a lot more from watching your side of this but I would love any support!

Hopefully, by the time we’re done someone else will be willing to take the hotseat

As I wrote over on the other thread, I’m really hoping that anyone interested in this experiment will participate in this thread rather than lurk and read the other one before the game is over, but obviously that’s up to the individual.

It will be far more interesting and informative if you take it slow and debate each play, maybe with polls, but you can also just wing it and see what happens. Up to you.

Having received the digital game I will be following with interest.

Any preference on sides? The game will be +2 influence to the US, with “optional” cards (not really optional these days).

Happy to participate if I can keep up. On a side note is the app asynchronous? I would be interested to play but could only do so with regularity if it was (and if it works on my aged iPad!)

Well, the app can be set so each player has a 45 day timer, so it can be played asynchronously.

I think the suggestion is for the weaker player is to play as USA so I’m happy with that. It hasn’t made much difference in the games we’ve played.

How are you going to send me screenshots to post? Shall I PM you my email address?

Ta - it’ll depend on the patience of the other player then!

Yes, @Benkyo and I are on different sides of the world, but we tended to have one long action round and then play a few quite quickly when we were both awake.

lalunaverde and I are taking much longer over turns.

If I get a couple of regulars on this side and can get discussions going I’m happy to take it slowly like a standard PBF so everyone gets a say.

I’m happy to drop advisory notes. I’ll use my experience to tell you the short and long term implications of some card play (to the best of my ability), and even the future cards on the deck. The objectives and the steps, that’ll be all yours!

OK, let’s see if this works. This will be the last time I look in this thread - from hereon in, Captbnut will be receiving and posting the images. Please message me your setup once I’ve sent your hand image and it’s been posted here.

Board after USSR setup: 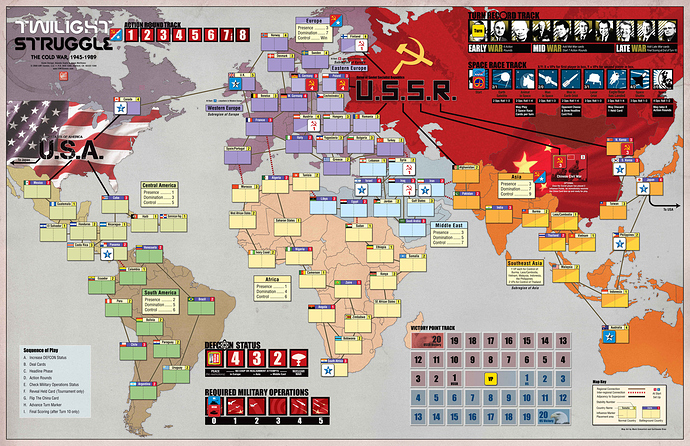 I have 7 starting influence to place in Western Europe, then +2 to place anywhere else I have influence.

Does Benkyo have any preferred strategies?

My standard set up is to put 4 in West Germany and 3 in Italy.#

France is the other battleground, which is important for Europe scoring. However, there are 3(?) Early War cards which remove influence in Western Europe, specifically France - Suez, De Gaul and Socialist Governments (last I which I have). I don’t want to commit starting influence in France to have it wiped out in headline. I’m then a bad coup result in Italy from being in a lot of trouble.

Iran - Benkyo did this to me, I control Iran and he has no control in the middle east. I can headline Middle East scoring and grab some easy points.

Panama and South Africa are both in mid war scoring regions which USSR has much more access to than the USA.

I’m not interested in Israel or South Korea because they can both be replaced by early war ‘war’ cards. Not Japan, because mutual defence act will allow me to control Japan in early war. However, as @lalunaverde will testify, Asia is a real weakness of mine.

As for the turn, not sure yet. I’m hoping to hold De Stalinization until I can Space race it in turn 3 (cards are reshuffled before turn 3 and I don’t want it to come up again in Early War).

As new players can see, there is a lot of mitigation of bad things here. If you don’t know the rules - I can play cards for the event or for ops. If I play an opposition card for ops then the event happens, either before my operation or after.

What do people think?

I’ve not lasted long enough against him to find out!

I would say use your +2 on either Iran or Italy, considering that you have the ME card. Mid-War is too long for a +1 addition that would be too crucial elsewhere.

As an aggressive Soviet gambler, if I would go for a Europe strategy, I would try to coup Italy on Turn 1 to do a quick reversal on Europe, especially if I have De Gaulle and/or Berlin Blockage, which allows me to damage your hold on France and West Germany, respectively. However, even if playing cautiously, an Italian coup is a good reversal of Europe with 3 Soviet v 2 American battlegrounds. I have never seen Benkyo with an aggressive Europe attack.

Iranian coup would be the standard Soviet opening, if I’m going on this route. This is Ben’s preferred opening, I believe. I would headlines Europe card to stop you from gaining dominance score of Europe. With a successful Iranian coup, USA will be restricted to Israel -> Egypt (this one will be nullified by Nasser), and Israel -> Jordan -> KSA.

Iranian control also gives Soviets opening to Pakistan -> India. This will give Soviet dominance of Asia IF they gain those two + South Korea.

For your hand, obviously, delay Nasser until after ME scoring. Vietnam Revolts give crucial Soviet access to Thailand. Warsaw Pact is an easy Soviet card to play, especially post-Europe scoring. Playing CIA allows you to see Soviet hand on the short term, but long term, it’s a possible DEFCON suicide card on Soviet hands.

My standard set up is to put 4 in West Germany and 3 in Italy.

Iran - Benkyo did this to me, I control Iran and he has no control in the middle east. I can headline Middle East scoring and grab some easy points.

+1 - put your extra 2 into Iran. If he doesn’t take Iran on the first coup, head for Afghanistan and Malaysia.

Play CIA for ops, and hope he picks it up later.

Hold the 3-op red cards until late, in case of Blockade.

Yeah. I was planning on playing CIA for ops so maybe he’ll have to deal with it later.

Over protecting Italy and Iran is a good plan. If I can hold Iran until my turn, I can look to play into Pakistan. I’m worried about Asia, would you Space Race Vietnam Revolts? I don’t like Socialist Governments, or Warsaw Pact before Europe scoring, but as @chrislear says they are good protection against Blockade.

It isn’t the opening hand I’d hope for!