Tell us about your Arkham Horror LCG campaign!

Talk about your AHLCG campaigns and/or characters here. Please label spoilers then blur or hide them for others, thanks!

Tell me about your arkham horror lcg campaign! - Talk About Games! - Shut Up & Sit Down Discussion Forum.pdf (8.4 MB)

(We don’t have the spoiler-blur plugin here, so please hide them: click on the cogwheel in your editor, then “Hide Details”.)

I just started a new 4P Forgotten Age campaign. Two of us have played before, and two haven’t. Given that (and the two who know the campaign are playing Carolyn Fern and Lola Hayes), we’re playing on easy.

I only have the first two cycles, but King in Yellow was one of my favourite protracted gaming adventures. Of the cycles since, which do you think is the best and I should try to nab? I think more than anything I just cooled on the themes of the next cycles.

I definitely want to grab Innsmouth - would Dream Eaters be a goodie?

I have a group of 4 with 3 first time players, so of course we’re playing on Hard… I was outvoted.

I’ve just started a Dream Eaters campaign in two group mode with three other people. We randomly picked the teams, then randomly assigned dream/awake. I’m playing Rita Young and my friend is Ursula Downs in the waking campaign.

Akachi Onyele and Patrice Hathaway are taking on the dreaming campaign.

My team has played one game so far (we won!) and now just waiting for the other team to sync up on interludes with them. I would have liked to play the blind run that way but it wasn’t practical. Hopefully now I’ll get to experience some of the paths I didn’t before!

I’m currently on my first playthrough of The Forgotten Age, playing as Mark alongside Ursula. I found the first two scenarios a bit of a slog but I’ve been enjoying it since. We’ve just finished Heart of the Elders.

Memorable moments from our past campaigns:

I’ve also got a solo Dream-Eaters campaign going on. I’m now eagerly awaiting the final Mythos pack so I can finish it off.

My husband, Joe and I, played Arkham Horror LCG today after a bit of a break and falling way behind the release schedule. We still haven’t finished the Circle Undone campaign. We played two scenarios in it today with some solid deck upgrading in between. We were on For the Greater Good and Union and Disillusion. Before that last game we had to make the choice of whether to help the lodge or the witches and we went witches. We disrupted the lodge pretty well and now the head witch is possessed by evil. Oops? In typical Arkham fashion, I’m not convinced either option would have been an actual good choice but perhaps we’ll find out more in the last two games.

Joe is running a Diana Stanley deck with a focus on what he likes to call “shenanigans.” He likes to manipulate the chaos tokens and the like to feel like he has some control. He also has some fight abilities but not much investigation.

I’m Carolyn Fern. I keep us alive (hopefully) and then do most of the investigation with some fight abilities of my own.

Wife and I have played base set and path to carcosa cycle.

About to play with our friends who have never played. We have an old hunting cabin by a lake and thought that would be the perfect weekend. Teach them base game and then do dunwich which none of us have done

Thanks to the convenience of TTS, I am in 4 different campaigns at the same time (with one in person campaign sadly stuck at one scenario left to go).

Yesterday I experienced the glory of Sefina with Ornate Bow, Leo de Luca and Haste, and took 5 actions almost every turn.

EDIT: I’m actually in 5 campaigns! But one has been dormant for a while so I forgot about it.

Yesterday I experienced the glory of Sefina with Ornate Bow, Leo de Luca and Haste, and took 5 actions almost every turn.

Sounds awesome. I’ve played Guardians of the Abyss alongside an archer Wendy who was very much a force to be reckoned with. The first scenario went fine, but the second went south quickly after Wendy stuck an arrow in Leo then Leo shot Minh with a BAR!

This is Arkham Horror, not Reservoir Dogs!

You are obviously forgetting something… 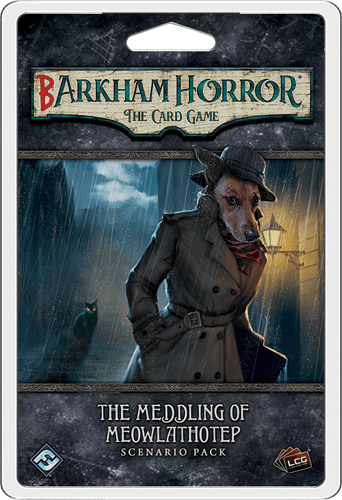 We played Undimensioned and Unseen from Dunwich Legacy tonight. We decided to drop back to Normal difficulty for this game. We had a fairly easy time this game because our characters have 4, 4, 4, and 3 willpower and we didn’t draw any of the nasty enemies. I even got to play Delve Too Deep.

Last night we did the fifth scenario pack for Circle Undone, In the Clutches of Chaos. I was in the kitchen getting snacks while my husband Joe did the setup. When I got to the game room he said “I think we’re playing Pandemic.” He forgot to add the “from Hell” part that should always go with any game of Arkham Horror.

This did not go at all well for us. Most of the tasks we needed to complete were things that were very difficult for our investigators and the ones we could do basically prevented my character from ever getting going. At one point I had no cards in hand, two left in my draw deck, and the only thing on the table in front of me was my signature weakness. Hooray discards.

After we were done, we checked cards removed during setup and those were all things we would have had better odds at. That still might not have mattered. Twice we put almost everything into big important tests to all but guarantee success, only to draw the big red auto fail token. After we were both knocked out, we checked the end of game information to see if our specific version of failure meant end of campaign or if we continue under RAW and we do go on. Battered, beaten, and me with two physical trauma when I only had 6 health to start with, but on we go to the final scenario.

We might play the finale later today. Here’s hoping our luck has changed significantly over night if we do!

We did play the final scenario today and our luck did not significantly improve. We failed at what we estimated to be about the mid point of the game then decided to set it back up and give it another go for the fun of things. That time I died towards the end and the husband made it to the very last thing that needed doing but wasn’t able to succeed before he, too, went down. So, sorry, universe, but it seems you’ve been devoured by some elder god monstrosity twice in one day because of us.

Oh well. Time to clean up the mess that is our card collection now, build some new characters, and try the Dream Eaters campaign.

When I read the set up, I totally yelled this is Pandemic!!! at Nicole haha.

I played the secret scenario from TFA today for the first time and we won!!! The two other players had already played it, and while they didn’t spoil me, they knew how to set it up so that it wouldn’t be as tough. I can see how harrowing it would have been otherwise.

I also played Read or Die, the Daisy Walker challenge scenario and it’s neat! It reminds me of the solo scenarios for Gloomhaven. They have more of a puzzle feel than regular scenarios and it’s the same here. We went in blind and on the second round we felt like we were totally screwed, haha. Through some good luck, we were able to prevail! I love the parallel investigator idea, especially if it always comes with a challenge scenario like this!

I’m playing Shattered Aeons tomorrow (I’ve been playing in two parallel TFA campaigns) with two players who are playing through TFA for the first time, so I’m experiencing some vicarious excitement. I’m also continuing TDE A with Dark Side of the Moon. This has been the scenario that’s given me the most trouble in both full campaigns I’ve played. I think we have investigators better suited for it, though.