We played Caylus 1303 - I didn’t had a strategy but it was still fun. Despite being cut down by the designer, it can still bite. Damn good game.

Been playing a fair amount of Aeon’s End using the Expedition system introduced in the New Age set, and I really like it, but I keep waffling between liking it and loving it. I love the variety present in all the different Nemeses, the modularity of the shop and the mages and the Nemesis you fight, the strategy present in finding optimal combos in the nine-card shop, and the Expedition system is a blast… but sometimes I wonder if the core mechanic actually improves the game.

Having a deck that never shuffles means you have to think about what order to play and discard cards, and removes a lot of the randomness usually present in deckbuilding games, which is great. But, to counteract that, the game introduces a random turn order mechanic, which I find to be interesting, but also incredibly frustrating. When the nemesis throws out a nasty power that will decimate you the next nemesis turn, and then the very next turn that power activates without you having the chance to do anything about it, I don’t feel like I made a mistake, I feel like the game screwed me. Because there’s no tension in your deck, the tension has to come from the nemesis deck, which can make the game feel like it’s not always in my control. With other deckbuilders, I might draw a hand of garbage, but then I get to think of how to maximize that hand. In Aeon’s End, I frequently know what I’m going to do with my hand, and the only variable is whether or not I get to do it before the nemesis slaps me around a bit.

It makes me think a lot about Marvel Champions, another highly variable, highly modular, highly expandable card game that I enjoy playing solo. While Champions has a lot of deck randomness, and a lot of swinginess in the villain’s deck, I always get a chance to respond to the villain’s actions. They drop a minion or a side scheme, and I get to think about how I can deal with it, and whether I want to deal with it now or focus on a different problem. Aeon’s End rarely gives me that feeling; instead, I know what I want to deal with, and the game decides whether or not I get to do that, and how much punishment I take before I do.

Long story short, I do really like the game, but it can be quite frustrating, and I like Marvel Champions a lot more. That’s a bit of a rough fight for Aeon’s End, since Champions is my favorite game of all time, and I’ve played it hundreds of times, but the games fill a very similar niche, and Champions just does a lot more for me. That said, the Expedition system in Aeon’s End is super cool, and I love the idea of a mini-campaign without a lot of the fiddliness surrounding it. It’s an excellent game, and one I"ll probably end up snaffling up all the content for at some point.

The random turn order is why I would probably not recommend playing at the game’s maximum player count of four. If you play with 2 or 3, you have room to make some decisions about who acts when. You can absolutely get screwed by the nemesis suddenly acting twice in a row with short term powers and whatnot, but at least you have a much better chance of making sure the player that can best address the existing situation has a chance to do so. With four, your turn order is just completely random and that is rough as hell.

Trying out Arkham Horror the card game on TTS and… it’s alright? It does a lot with very little. I’m just upgrading for the 3rd part of the first campaign, with the default two characters. I don’t feel like I’ve had to make any tricky decisions yet, aside from upgrades, and even then I’ve opted to just upgrade all the cards I can without adding any new ones. I suspect that cooperative exploration-style narrative-ish games just aren’t my thing.

My husband, Joe and I, played Arkham Horror LCG today, too. We love the Arkham LCG but have fallen several months behind the current releases. We still haven’t finished the Circle Undone campaign. We played two scenarios in it today with some solid deck upgrading in between. EDIT: Ah ha! Found the Arkham LCG Discussion thread. Moved the more detailed campaign stuff over there.

After a break for dinner, we played a light game of Tiny Towns, our first with the Fortune expansion. I won in a pretty close 28-32.

I’ve got Skytear set up for a trial run with my partner. High probability this won’t get played tonight, but just setting the game up is the second hottest tabletop action I’ve seen in three weeks, so that’s post-worthy in my book.

This game has excellent table presence. Even my partner, who isn’t generally about the fighty games, had to admit it looked pretty neat. I’m motivated to paint this one. 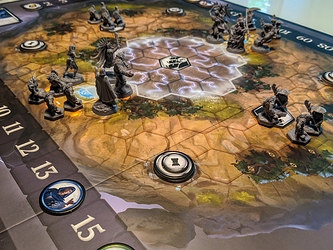 Keep in mind that the campaign in the core set is basically the equivalent of a videogame tutorial. It’s okay, but it’s not indicative of the shenanigans that the full campaigns bring to the table.

Thanks. I will stick with it, but I’m glad I’m not being forced to fork out real money to get past the tutorial.

The random turn order is why I would probably not recommend playing at the game’s maximum player count of four. If you play with 2 or 3, you have room to make some decisions about who acts when.

There are various minor alterations in the cards over different sets which allow for variation. One 4-player turn deck composition which we were demoing last Essen (therefore it must be in New Age) has two “1 or 2” cards, two “3 or 4” cards, and two Nemesis cards. Still one turn per player per round, though, so if 1 took the first “1 or 2” then 2 has to taken the second one.

We played some Stay Cool yesterday.

Aside from a few shortsighted/problematic cards, we’ve really enjoyed it. Also the person who owned it discarded a card because it was “Who is the strongest out of these three?” and the accepted answer was Chuck Norris. I respect his decision.

So, I am innocent of king-making, Your Honour.

So, I am innocent of king-making, Your Honour.

I’m not totally convinced that “king-making” is a problem, especially in games about political intrigue. Perhaps I’m just very philosophical about it because I lose games so often that I don’t generally get “robbed” of a victory!

Don’t have a problem with it too, otherwise, area controls won’t be my fave genre!

Played some Lord of the Rings: Journeys In Middle Earth. Here are my initial thoughts:

It’s very, very, very hard. It’s all about optimising your turns, and the only way to do that is by already knowing every character and role and item, which you won’t when you start the game.

If you take Pathfinder and Hunter (the two more generally effective classes) it’s basically impossible to win the 2nd mission. I’m good at optimising, I’ll sacrifice some things to travel further in a turn and deal with the urgent threats, but I was still getting slammed. Interesting that they then released an Easy mode in the app, which reduces the threat speed a bit and gives you free inspiration tokens, but even with the time pressure reduced certain parts are still difficult.

The theme is great, the items are very few and only change slowly, but it feels as though this will develop more as future expansions come out.

I’ll definitely keep playing, but if I’m struggling with it then a casual gamer who likes LotR is going to ragequit pretty quickly…

I saw you guys were playing. Well, one of you anyway.

We were having a TTS party of our own at the same time with some “local” friends. We had a few new modules to try out from that glorious BGG Top 500 list that was posted by @IssiNoho77 the other day.

The new module we tried for The Crew is scripted and just perfect. We played a few rounds just to test the module which was a vast improvement over the one we previously used. Anyway, The Crew is always fun especially when you play with 4 people who have had a bit of practice and you don’t need to start with scenario 1.

Then we tried Cryptid. The game was fun as usual and the module nicely scripted–however the player colors were a bit difficult to keep apart. We played one round with the person not using the integrated checklists winning. I already knew that the game plays better when you focus on the board instead of trying to sudoku your way out of it.

Finally, after having played El Dorado on a real table we brought the starter scenario to the virtual table. I made a really stupid mistake because I was sure of a win and ended up losing to someone who had been 3 turns behind me because I only had 2 cards in my deck that could cross water. Our friends immediately said this would be a perfect game to play with their kids and I wouldn’t be surprised if they bought it ASAP.

Anyway the stack of rulebooks next to my computer is growing because everytime we play a game I tend to want to have the paper rulebook with me and it’s just that much faster to check.

I am so glad our friends are taking to the digital playing as much as they do.

Anyway the stack of rulebooks next to my computer is growing because everytime we play a game I tend to want to have the paper rulebook with me and it’s just that much faster to check.

TTS is sufficiently demanding that I can only run it on the big desktop machine, not the laptop; and that has three monitors, so one of them’s usually for support material.

If anyone else is in the situation where their desktop is man enough for the job, but the laptop/chromebook or whatever isn’t, Parsec is the answer.

You install the server program on your games machine, then the client on a laptop (you don’t have to install the client, there’s a web version, it’s just not quite as good). Then you can stream anything from your main PC to any other device. It works on your network at home, or over the internet.

So if I’m feeling like slouching, I fire up TTS or whatever else through parsec on my laptop in the living room. I’ve also got PDF copies of the rules of all the TTS mods I have (there’s a few…) in a folder in Google Drive, and then just alt-tab between them.

If you’re not into alt-tabbing there’s a couple of other rulebook options. You can upload a PDF to Steam’s cloud and add it to the game as a custom component, or the quick and dirty way is to spawn a tablet onto the game table, then view the PDF on that. It’s not perfect, I grant you, but it works.

Looking forward to hearing how it goes. We really enjoyed our games so far, and we’ve barely scratched the surface; still using the “basic” mode for the heroes and starter decks

Thanks to all of this it’s been a couple of months so we’ll have to give it a few refresher games before really digging in. Not sure I’ll get into the real deck building, but they have pre-built decks for each hero, so you can draft and “shuffle” build your deck.

Async turns, which was a bit weird but fine.