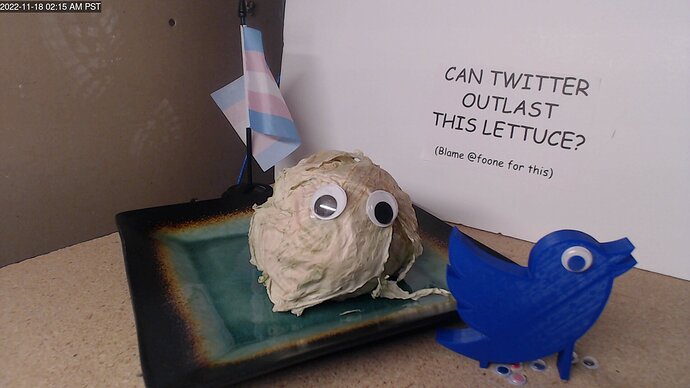 An auto-updating webcam of a lettuce

A lot of general purpose instances exist and some topical ones.

Traffic is sharply rising over the last few days.

Many instances are pretty full and you cannot just make accounts. Your mastodon server/pod determines your address but you can in general post from everywhere.

So I am currently yashima@mastodon.cloud

But mastodon.cloud is one of the OG instances and pretty full and sometimes the servers just don‘t work well under the load.

Another popular one is mastodon.social. I think there is also a general purpose one on mas.to.

Tabletop.social is currently only for people who get a recommendation from someone already on it.

Many organizations run their own pods.

One can move between instances. Or have multiple accounts. The software allows for all that.

PS: there is a video of Twitter HQ making the rounds where someone is projecting insults to Musk on the building. My favorite is „Space Karen“.

Some of the techie folks I follow are on “chaos.social” which is invite only and not generating invite links currently.

So they’re pointing people at “leds.social” and I do like LEDs.

Chaos.social is probably run by the CCC (Chaos Computer Club) I would assume. And so is obviously popular with techies. The admin account is called „Ordnung“ which says everything you need to know.

Hilariously, I just fired up the desktop computer and glanced at Twitter in the browser. These were trending: 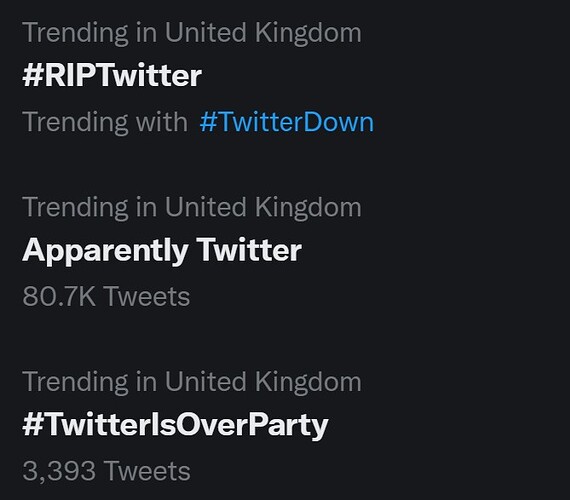 Tabletop.social is currently only for people who get a recommendation from someone already on it.

If anyone here were in a position to do that, I wouldn’t say no.

npi is on there

Yeah, but they have no idea who I am.

So GitHub - mastodon/mastodon: Your self-hosted, globally interconnected microblogging community has 700+ contributors. I just checked to see which language it is using. Obviously I am not surprised that it is something I have had trouble understanding in the past… (ruby on rails). Ah well…

On German twitter “StudiVZ” is trending–it was a German shortlived facebook analog way back that only this spring shut down completely.

I have seen a few people stand up their own instances of Mastodon just for their own accounts. RaspberryPi and StrangeParts as examples in my Twitter-sphere.

I’m currently hosting my website using a Google Cloud VM, so I guess it’s possible I could do the same.

(why is tumblr still running?)

It’s actually doing pretty well at the moment. Now it’s no longer owned by a big corporation who were trying to turn it into something it’s not, it’s instead managing to sustain itself by leaning into things the userbase actually likes (even if what the userbase likes is paying money to show a random selection of users a stupid post or getting two blue checkmarks for $8).

That’s why you can’t use WhatsApp for the first time without a Facebook login, which is why I use Signal.

You don’t need a fb account to use WhatsApp, just a phone number that can get sms messages.

A key thing I noticed is that mastodon allows you to move your account from one instance to another instance; I’m not sure the UX of doing so, but it apparently even automatically updates for other people who may be following you.

You don’t need a fb account to use WhatsApp

My understanding is that you cannot now set it up without an FB account, but if you have a WhatsApp installation that pre-dates the change you can still use it.

Your understanding is incorrect. (I even tested it.). It’s possible there was a y time where that it was required, or an announcement was made that it was going to be required, but the current state of European privacy requirements prohibits it. Meta will happily link accounts, the better to target advertising at you, but you have to allow it.

the author is an ex FB PE. they know what they’re talking about (PE == ‘production engineer’, who are the people at FB who make stuff work, and keep working, even when the last minute user count jumps from 100 million to 200 million, while there’s a forest fire that took one of your biggest datacenters offline.) Their take on this pretty closely matches mine, though I’ve got some quibbles with some of the details.

There used to be a whole bunch of plugins for The Gimp that would save out each layer of a document as a separate file. But they all got broken by the Python 2→3 transition.

Now the way to do it is to export as PDF, with various optimisations turned off, then strip out the images from there. (And in my case then combine images with masks to get back to images with transparency.)

Fortunately this is not hard, and Xia PBF looks like a possibility.

Aren’t gimp plugins written in a Scheme dialect? Where does Python fit into things?

Yeah, I think a lot more people wrote stuff in Python2 than in Scheme.