Just ignore me. I am still miffed about having decided it would be stupid to go.

If I were going to Spiel this year this is my list of anticipated games. More are being added to the preview every day and interesting stuff is bound to pop up.

This does not include games I already ordered (Brew & Luna Capital because last year I got burned by not immediately going for BtS)… and stuff that is Demo only (Phraya & Voidfall) or I have already played (Cascadia) also doesn’t include stuff by designers that have failed to impress me in the past no matter how much other people like them (Boonlake).

PS: I hope this is not a “I am going to buy all this” thread… I hope some of these turn out terrible before I go shopping. This is just my list of games I’d be going to visit at the publishers’ booths.

I haven’t been looking much at Spiel previews but Roll Camera definitely looks interesting. Of the others, well, I have Shamans and nothing else is screaming at me.

Air, Land & See Critters: yay for a re-theme. I am holding out for this one.

Thanks for the shout out on this!

Knizias are mostly an insta-buy for me.

I have not heard of any of these. Where do you get your information?

So glad Air, Land and Sea is getting a retheme.

That knizia euro looks so nice.

This. For the last 4 or 5 years before every major convention BGG has these „preview“ lists where games are added that are expected to be shown/sold at the convention. I usually only follow the Spiel on closely which has been up for at least 2 months by now.

I tend to go through games as they appear on the list and click to check them out, mark them as „not interested“ for the most part…

The biggest problem is that games that enter the list early get thumbs up from the super-nerds who are there at day 1 and then you have runaway “victory conditions“ where a few games get a lot of thumbs/hotness (preview specific of course) and get more because they are already at the top of the list. Both Devir games are interesting but they were on the list from the start so… this is yet another piece of the hype machine that one needs to be aware of.

In the past few years games like Pax Pamir 2, Beyond the Sun and other luminaries have been quite high up on the preview hotness. But also Black Angel (which I want to try again now… but was majorly disappointed in after the Spiel hype). So as usual, the hype says very little.

But overall I use these lists to figure out what I want to take a closer look at at the fair especially for a few more of the obscure things you wouldn’t notice otherwise.

Also can any French speakers confirm the controversy about “Bitoku” for me? Apparently, it is as well named as the old Mazda model “MR2”

I’m desperate for a retheme but a bit disappointed it’s still war themed. Was really hoping for an eagle vs shark champions of the wild style.

The only thing that comes to mind is that, phonetically, Bitoku sounds like the French equivalent of cock in ass (spoilered to avoid any offense).

Might be something else, though, even under the best of circumstances I am notoriously profane, and I’m super sleepy right now.

Skimming the list, the only one that jumps out to me is Whirling Witchcraft, which I’ve had my eye on for a while.

Mainly because it’s got Weberson Santiago art, but also because it seems like a successful implementation of a game idea I had a while ago

(my version didn’t get any further than a first playtest).

Dexterity Jane seems like it might be worth a look. Tiny, high stakes bluffer, seems akin to Skull etc.

The WW2-theming of the game was always the worst part. More cartoony violence is a step up, I suppose, but gosh I was hoping for a completely different theme (like, “where did you see these critters? Who got to see nicer ones?” That would be great!).

Oh well. I’ll probably still get it whenever it reaches Canada.

I was hoping for a non-combat theme as well, particularly since I think my partner might actually dig it with the right coat of paint. As it stands I feel like it’s still something of an improvement, but given how abstract the title is, it feels a bit weird they stuck to the theatres of war conceit.

Air, Land & See Critters: yay for a re-theme. I am holding out for this one.

Given that I already have AL&S, the expansion “Spies, Lies & Supplies” looks potentially interesting, though all that’s been revealed so far is a cover. (Via BGG news.) 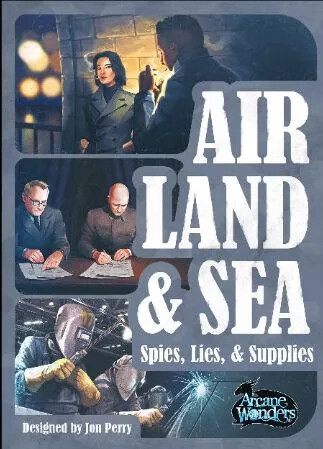 Ambiguous Paine’s Grey cover. Perhaps a new theatre? Either way that colour threatens to continue their tradition of forcing players into a sun-filled room of mirrors to be able to distinguish by shade.

Spiel is near but won’t be attending. Keen to try these:
Art Robbery - a Knizia AND robbing art!? This one is a must buy obvs
Caesar! Seize Rome in 20 Minutes
Coffee Traders - Wildcatters was fun. Keen on this one as well.
Eriantys - my undying loyalty to Leo Colovini. A re-implementation of Carolus Magnus, which is great fun with the BGG variant.
Arkwright the Card Game
Excavation Earth - don’t want to splurge money on the KS. Will look for someone with a copy.
Mille Fiori - a Knizia that is to-try
Hanamikoji: Geisha’s Road - I’m getting this one as I love the OG Hanamikoji
Siege of Runedar - A coop Knizia deckbuilder. I am intrigued.

Watching from afar:
Total War: Rome - my fave TW title. I am expecting this to be awful. I’m keeping an eye. Hot garbage or a great gmae? it’ll be entertaining to watch either way
Armonia - a light Rosenberg game
Bitoku - it’s a Devir, I guess
Castle Party - same as above
Fjordar - I have low expectations with this, but I am keen on keeping an eye on any feedback
LUNA Capital - Devir

2022 Watchlist:
Crescent Moon - area control from Osprey Games? That’s enough to keep an eye on it
Aegean Sea - new Chudyk
Transatlantic II - from Mac Gerdts
Get On Board - I mean, I like Let’s Make a Bus Route

Do you think Aegean Sea will ever sea the light? It’s been “next year” for almost 3 years now…

I missed that that one was a Knizia… oO

PS: of all the people I know who usually go to SPIEL… which aren’t that many but also not that few… 1 person is going. I regret a little bit on missing the chance that SPIEL is less crowded. On the other hand I have Something between 6 to 8 people coming over on Saturday for games

No idea how I am going to fit them all at my 2 tables.

Tindaya looks intriguing. Sounds Spirit Island-esque. I had my eyes on Terra Futura because it says Network/Route Building, but I don’t see it on the images.

Oh. I had not made that connection but apparently my subconscious did.

I had my eyes on Terra Futura because it says Network/Route Building, but I don’t see it on the images.

Exactly. It says routes and networks with such a nice “use case” (aka theme) and then it doesn’t look like that at all. Makes me even more curious about it.

Sacred mountain in Fuerteventura for the original population of the island, before Bethencourt conquered the island in the 1400s for the crown of Castille, that about 15-20 years ago was the centre of a big row as they wanted to start an artistic project that involved some excavation to create an artificial sort of touristic attraction. Luckily, it never saw the light.

That’s as much as I know.