Just give the link as you did, and depending on the state of cookiewalls it’ll either work or not.

I started a solo game, but gave up about 1/3 of the way in. My interest in solo gaming is just too low for the overhead involved. I need to wait for my gaming group to come together and run through it with them (which is why I bought it in the first place).

In contrast I have played a full solo game and enjoyed it very much and would probably recommend it solo. I say a bit more in the Kickstarter thread (I think, or the games played one).

Edit - if this works it should link …

Just finished my first solo play of Sleeping Gods. Really enjoyed it and only touched a smidgeon of the content. [image] Picture is me about midway through the game. Some takeaways It is a table hog It took me me playing solo around 8+hours in 5 sessions to play through. It will take longer with more players but not necessarily less time based on familiarity. there is a lot of fun in the story - I had at least two wow! moments with things I uncovered. I played with the expansion but not t…

I just have to admit I’m not a solo gamer. I don’t like the place my brain goes to when I do it. I would much rather player a game by myself on my computer or phone against AI opponents.

I’ve been (slowly, because children and other, shorter games) playing it with my wife, and we love it. We just got through the “first act” of the event deck, but it feels like we’ve already been through so much.

I’m not sure I feel a story cohering around a particular group of events or people (other than us, obviously), and we’re just kind of wandering around getting beaten up. It’s a very interesting way to get beaten up, though, and every place we’ve been feels different.

Played a full game with my husband. We quite enjoyed it and are looking forward to another play and more exploring of the world when we get the time. Hopefully soon.

Jesus, the state of someone saying they believe in biological determinism in 2004.

I am glad for the comparison with 7th Continent… now my partner is interested and we may give this a try eventually.

Also we are enjoying the long format and context a lot.

I think this was a good video. I feel like the style of review sort of has an air of film review about it in the way it echoes other pieces of media to highlight what this one does.

I’m still not sure the story itself good but rather does simply better than most story board games. In video games I have been choosing the good thing over the baddie profitable thing since Knights of the Old Republic- so I’m not convinced it’s that innovative that I’d spend 25mins labouring that point but it’s interesting to see it’s taken all this time after video games have done it.

It would have been really interesting to have some reference to the more recent pirate game they raved about in Forgotten Waters - it would have been a more nuanced comparisons rather than some old dusty stuff.

Hmmm - watched the video and didn’t like it - laboured and way too long. Tomb of Horrors not being good? Hardly a revelation. First Fighting Fantasy a bit clunky? Yep (and I understand the new edition doesn’t even have the older evocative illustrations).

Ah well. I found this and the space one a bit too basic. The colonialism one had a very interesting perspective though it was (obviously) narrow and could have benefitted from collaborating with different contributors from a wide range of cultural perspectives - not everything is an individual thesis.

I am REALLY interested in hearing if anyone on here has played both Sleeping Gods and Forgotten Waters, because they’re literally 1 and 2 on the wishlist. (They’d be perfect to play with my partner).

My biggest “choose the light side instead of maximum gain” story from computer games is Bastion, where I did an entire playthrough to see what happens if you choose an option to abandon a team-mate at the end, and then… couldn’t bring myself to do it

laboured and way too long.

I did find the review very slow and long. But while it was saying simple things, they were 100% correct and good for an audience who doesn’t know the gamebooks etc. 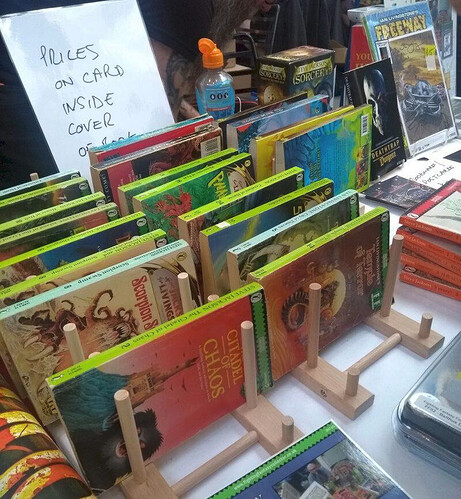 Ahem, me again. Very different experiences. Forgotten Waters is a great game, app driven with full narration. A campaign can be over in one long or two short sessions. It is very rooted in Pirates of the Caribbean style adventure. It’s funny and characterful and popular with my wife and kids.

Sleeping Gods is much more expensive especially if you add in the expansion you’ll want to have because it completes the map. It really is a 20 hour- ish campaign if playing non-solo, and is a table hog. It’s atmospheric, spooky and weird with a 1930s style setting. It is much more repeatable and in depth, I guess, but only if you really like it (I do).

So they both have a space but I’d argue that if you are unsure, the lesser investment and ‘easier to play’ status of Waters may be a sensible choice. Note I don’t agree with NPI that Gods is the brilliant-est game, but I do really like it.

Huge regret of mine selling my originals - my first was Forest of Doom on publication. I wouldn’t be playing games now if it wasn’t for that book!

‘easier to play’ status of Waters may be a sensible choice

Ah well. I found this and the space one a bit too basic. The colonialism one had a very interesting perspective though it was (obviously) narrow and could have benefitted from collaborating with different contributors from a wide range of cultural perspectives - not everything is an individual thesis

I agree and disagree. The format definitely needs a lot of work, but fair play to NPI for trying to do something different at a time when they seemed pretty comfortable in what they were doing (and could have easily carried that on). Part of the reason so many reviewers are so similar is because everyone knows they work (pros and cons in front of a Kallax, or comedy skits and laboured similes), so it’s going to take time for a new format to work itself out.

SpaceBiff’s recent slavery podcast received similar criticisms about scope and number of voices, but I believe they achieve two very different things. Deep diving into a single perspective hits a lot different to a broader ‘there are many sides and perspectives’ collaborative/panel approach. We need both of them, and I don’t think either approach should be pressured into being the other. Sometimes there are generalities within specificity, but go too broad and a lot of specificity is lost.

As long as the audience are provided with a decent understanding of what that single perspective is, what biases there are, the speaker has some kind of experience to comment upon (whether that be academic or experiential), and they aren’t being overtly insensitive to the subject matter, I have no issue with a single voice using their own platform in that way.

I think somewhere I’ve got most of the originals (various printings) apart from the rings of kether.

I did use to have Dragon magazines and I think the initial ideas for some where printed in shorter forms. House of hell? And the forest of doom.