Well, I’m attempting to get rid of some of the bigger boxes. Alien Frontiers (near-mint but unwrapped, with I think all expansions: Expansion Packs 1-7, Factions, Faction Packs 1-4, Outer Belt) for £100 + postage has just gone up on the GeekMarket. (If any of you lot would like to make me an offer, feel free. That seems like a fair price based on recent sale values, but I want this box out of my house.)

UK based, so postage charges apply according to delivery country

Just had someone back out of buying all three because they changed their mind on Space Worm, I wouldn’t split the Fort expansion and they weren’t too bothered about Noch Mal. Therefore my postage cost didn’t represent enough of a saving. sigh

Any game you want for Space Worm?

Jealous of you people who can do math trades. A guy in my local discord/Facebook group with about 1000 members tried setting one up, and between a general lack of interest and his chosen site - abecorn - rejecting all Japanese addresses as invalid, we have a grand total of 11 participants, only 4 of whom went through the process of actually validating a fake non-Japanese address. So, a nation-wide math trade between 4 people.

A reminder this morning to never get excited about Maths Trade results until confirmed. The latest rerun on the UK was so disappointing for me personally.

I can never spot the arbitrage cases that people seem so adept at spotting.

I try not to look until I get the ‘confirmed start trading’ message, can’t be disappointed if you don’t know

In the last UK maths trade my friend almost managed to trade Queendomino for Kemet… almost.

Anyone keen on a deck of Keyforge: Age of Ascension? It’s yours.

I’ve got some old D&D stuff to pass on. If anyone wants anything, please let me know. Condition is well used on everything.

There’s also 3 old issues of Dragon magazine (199, 200 and 206), plus a partially complete Dutch language version of the red box. 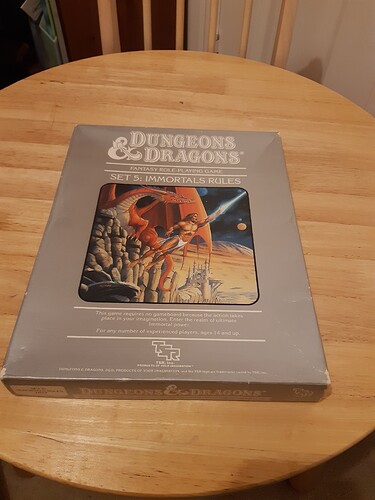 Has anyone bought direct from GMT (P500?) to the UK? Any idea on some shipping costs?

Cuba Libre is $49 plus which is tempting

I have but not for a while. Unfortunately GMT site doesn’t show what I have paid in shipping. In general, when a game is available, I have preferred to buy from UK because I think I once looked at it and it was just about the same price. That will only have got worse now.

Caveat - can’t verify this with data so may not be true!

Edit: also that price looks like the P500 price, which means the game is not currently in stock. So you may be waiting a while for it (sometimes years).

Yeah it is their pre-order system. It used to mean ‘if we get 500 preorders then we will print this game’. That still applies, but the number is different for the threshold I think… Then games can disappear into development. Imperial Struggle I preordered in 2016 and it took about 4 years to arrive despite smashing the 500 number very quickly.

For this reprint, they will look for about 500 commitments - which is why it is a cheaper price - before reprinting. That should all happen much more quickly, but then they have a production flow which this needs to fit in to. So several months at least.

I’m always tempted as the place they use is a shop in Birkenhead, a small detour on my commute. SO swinging by and picking up wouldn’t be too much trouble (but then I’ve already paid for shipping, so why bother?)

But as @DJCT says, the price ends up being very similar to retail.

EDIT: You could possibly win this copy if you eBay at all - GMT board games CUBA LIBRE | eBay

Yeah. Price is the same. I think the price range remains unchanged with Brexit.

A lot of the well known ones will easily hit UK retail. Some are evergreen like Dominant Species and some of the COIN series that they’ll reprint it anyway despite putting it on P500. The latter just allows you to pre-order directly.

I would recommend going for P500 if it’s a niche one that you think it’ll be hard to find. But most likely, you’ll find it in Second Chance Games.

I’m the high bidder on that!