Resolve this in your favourite RPG

A simple diversion: tell us how you would resolve a famous movie situation in your favourite game. It doesn’t have to be an appropriate game, of course… You might make a simple skill roll in Call of Cthulhu, but the same situation in Empire of the Petal Throne may involve sidling away and fetching the Omnipotent Azure Legion.

Here we go then… how do you resolve this scene in your favourite RPG? 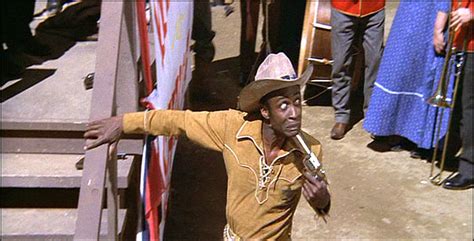 Phaser set to stun at Medium range is a “Security + Control” at a Difficulty of 2, and I’ll spend the Minor Action to Aim, allowing me to reroll one die.

Alternatively, I could try to talk the character down… but I don’t actually know this scene, so I’d have to figure out what skill combination would be appropriate (Daring + Command, maybe?)

Character has taken himself hostage. (grapple)

In GURPS the crowd’s initial reaction roll to Bart was poor, so his player tries substituting an Influence Roll (p. B359) – specifically Fast-Talk. This succeeds, raising their reaction level to Good. 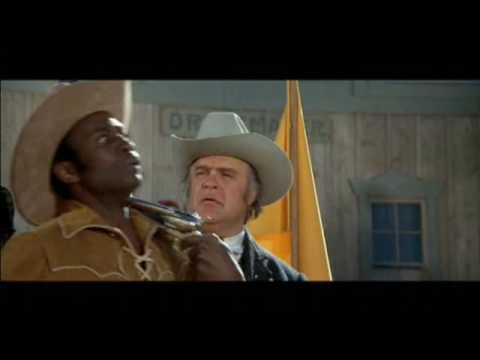 Ah, misunderstood. I thought you were asking how we, as players would solve the problem of that one guy holding himself hostage (hence: phaser on stun).

How would we rule the act of attempting to do what he did? Hmm. Almost certainly Daring + Command at a difficulty of at least 4, possibly 5. That’s the extra two dice for Momentum and Threat, definitely, and then attempting to justify a use of Determination for the automatic critical success. My memory of Blazing Saddles is not high enough to know what Motivations or Talents Bart has, so I couldn’t come up with an easy justification on the spot, but that’s probably what he did.

Managed not to roll any 20s either, which is something my PCs seem to do with surprising regularity.

passes over a chit okay, this is how I’m narrating the resolution of this scene.

You’re really claiming that your favourite RPG works like that, huh? Must be one of those Robin D. Laws games I’ve heard about.

Oh yes. I love it. With a passion.

Also the advantage of Hillfolk, or Effing Hillfolk, as I affectionately call it, is that I can use the same answer to resolve all future scenarios in this thread. With similar levels of excitement for the readers and, dare I say it, the players.

(You could go for Charisma instead)

For my real answer: extreme success on Fast Talk, followed by a fumbled Idea roll for the crowd. Possibly SAN loss when they realise they’ve been duped.

In Pathfinder this is either a Bluff check or, if I’m feeling tolerant, a Perform [acting] check. We need to consider the crowd’s attitude, as well as the plausibility of the deception. This probably ought to get Impossible: -20, except that, well, it’s Pathfinder, so this is the sort of thing that could happen via enchantment magic, possession, or some sort of curse. Or I suppose, a sentient firearm that’s seized control of Bart… so let’s call it merely Far-fetched: -10.

It will be opposed by the crowd’s Sense Motive check, which will likely be around a 15. For him to pull this off, he’ll need a 25, which is tough for a gunslinger… although he could well be a Mysterious Stranger, who’ll be Charisma-focused and have the ability to add exploding d6 to his Bluff checks.

Here’s another one to try (and don’t forget to say which system you’re using): the famous standoff in Reservoir Dogs in which all three characters get shot despite only two of them having guns pointed in their direction… 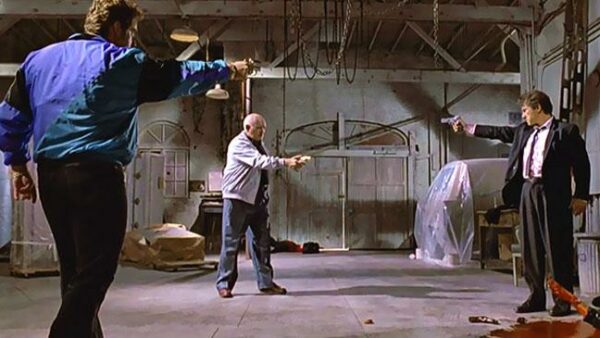 I’m not familiar with the scene in detail. I suspect one dividing factor for simulationist games will be in whether damage takes effect instantly; in GURPS it’s possible to be shot in such a way that you will eventually die (if you’re using the optional bleeding rules), but for the moment remain conscious and able to shoot.

5 seconds after this scene he says to himself “Oh baby, you are so talented…” so I think that counts as setting his talent stat to “high”.

It’s fine. Bullets only cause bashing damage to Kindred, so everyone just keeps firing and getting hit while they head to the various exits.

Although my favourite RPG is Mage, so: everyone dies immediately from the bullets.

@RossM asked for a die roll:
Add the extra ten to range weaponry

Split evenly between two opponents vs 13

@RossM asked for a die roll:
Two opponents vs 14