Welcome to the moon feels like a lot of different games that have a very loose structure in common but spin off in different ways. A different marketing strategy might easily have released these in a far less generous way I think.

[following on from What Should I Play? (Help me decide)]

Last week, I did get Fantastic Factories to the table for a solo game. I was a bit disappointed. The “AI” wasn’t very competitive and the whole thing felt like a fairly flimsy solo experience. I’m surprised, then, at how much love the BGG 1PG has shown FF over the years.

Still, I will hang on to Fantastic Factories for the moment because I think a “build your tableau and then run it” where everyone is running their factory at the same time is a valuable design-artifact to have around, if it works as well as it looks like it might. Concurrent turns is such a hard thing to do in a game; the only thing left to determine is how samey and solitaire the multiplayer experience is.

I’m glad I resisted the temptation to buy the recent expansions when they were on Kickstarter.

That night, I was going to follow up Fantastic Factories with a game of Baseball Highlights: 2045. I got everything out of the box and was looking at integrating some more of the expansions when I realized I was missing a rulebook for roughly half of the expansions (which is normal, I think?). I checked and found that I had downloaded the missing reference document, but had not yet printed it for ease of play. Feeling a bit tired, I packed everything away again.

Until last night. I got everything out, printed the missing document, along with a fan-made solo variant that is nearly ubiquitous at this point, for playing with the expansions. The key differences with the solo variant are as follows:

With the new rules reference in-hand, I shuffled all of the expansions into the Free Agent deck, using everything except the Coaches and Ballparks expansions.

For my starter team, I chose United Kingdom, in honour of all my UK friends here. I opted to do easy mode with 4 buy rounds before starting; but only 3 of them yielded any roster changes.

I was competitive throughout the first game; keeping it roughly tied through most of the game. The last AI card would have cancelled all 3 of my Average runners if I had been in the lead, but luck would have it I was trailing by a point, nullifying the AI’s ability and then allowing for me to take the win by 2 points (1 Average on base, 3 single Average runners threatened). The AI threatened 1 at the end and by luck I pulled a Cancel 1 Hit for the Visitor Save.

Only once did the AI draw a card with a cost of 5 or less (and it was a 5, of course). Even still, I feel the solo game with all of the expansions is a lot flimsier than the base game or with just Rally Cap. The AI’s team has tons of really expensive, very powerful players – but they are all randomly assembled and their abilities are highly contextual.

Unfortunately, by that point in the evening, it was too late to play another game of the series, so I packed away everything carefully so that I can continue another time.

On Sunday we had a very close game of The Great Zimbabwe. Two of us reached our points goal on the same turn, and initially I had overshot my goal by two points more, which gave me the win on a tie. Unfortunately for me my husband pointed out how our friend could have upgraded a different monument, so he redid his entire last turn and beat me by a single point

I’d read a few comments on BGG from people who were disappointed with the game (comparing it unfavourably to other Splotter games), so I was pleasantly surprised by how much I liked it!

I’m pretty sure that means your victory was real and your friend’s victory was hypothetical : )

I like it a lot. It’s Splotter crunchiness, but condensed into an hour.

[following on from What Should I Play? (Help me decide)]

I finished my Baseball Highlights 2045 World Series. I’m happy to announce the United Kingdom team made a clean sweep of the other team (I never did give the solo opponent an identity…) The star of the game, for certain, was Rollie Quisenberry, whose Closer1 ability was able to shut down some key offensive plays by the other team late in the game, securing the lead in 2 of the four games of the series.

I’m not sure how I feel about soloing the game with all of the expansions mixed in. Many of the cards from the later expansions are extremely situational and, as a result, resulted in a very weak defense. The AI’s offense was formidable, admittedly, but I was able to pick up a number of powerful defense cards to counteract that – leading my team to be a solid mix of big defensive cards and a few big hitters to jump out into a lead early.

Next on my solo list, I think will be Clinic: Deluxe, but I’ll need a bit of time to grok the rules for that.

1 Closer: If ahead, cancel all Hits vs. any player

I’ve been waiting to get together with @kyuss for BH2045 since before the pandemic… we always seem just to fail to arrange it, or we end up in a larger gathering and don’t want to play a 2-player game. (Yeah, I know it works with 4, but not 3.)

Excavation Earth - glad I didn’t backed thebase game + expansion bundle for this one. I thought it’s a very good game with very good interaction, but I have like 20 or so other games in my collection that I would prefer to play, in general.

Rising Sun - this one is turning out to be my fave Eric Lang title so far. I need to play Ankh more, but the left-right binding problem is such a turn off in our plays of it. Blood Rage is very trashy fun but I’m not wowed by the card drafting - as SWVAG have commented on card drafting: very lazy. I preer Inis’ tighter card drafting more. RS understood how old German games works and add in some trashiness to make it very fun.

Played with the fishy strategy, and had my shop burn down only one. End up second. Great fun.

the left-right binding problem is such a turn off in our plays of it.

Could you elaborate on this? Because I do not quite understand what this refers to? Is it the god merger thing? I have only played a learning game at this point -.- reasons…

It’s the fancy term for “sitting on the left of the newbie will give you significant advantage”. This can be seen in old school games, in general, too where the gameplay forces you to preventing any kind of openings for the succeeding player to exploit (e.g. Samurai). Some people find that fun

Surprisingly effective in Modern Art - I can often win if I go just after a player who’s worse than me.

I’m not angry, but I am disappointed.

Finished up my first game of Beyond the Sun. Not really sure I knew what I was doing but came second. I think what happened was I understood some bits of the game and just hammered them until they were dead and it conveniently dragged a lot of points out.

Picture of the Spirits of the Forest box: 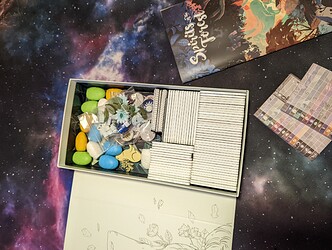 Last night: Sentinels of the Multiverse, second go at this month’s challenge, jointly with @Lordof1. Reminded me all over again why I love this game.

Great fun! I’m very tempted to try to find time to do your monthly challenges online. Will be a change from almost-monthly Pandemic Legacy!

I’ve binned the bottom tray from planet unknown as I think this helps with the tightness of the game in the box.

I’ve played it exclusively 2 player and there’s a tiny amount of competitiveness but I would say it’s 90 percent concentrate on your own stuff game.

Last night I had my first in-person gaming session, outside of my home, since the pandemic started. My word it felt great to play with folk who weren’t my direct family.

Played and for the first time ever, won*, a game of Burgle Bros.. Such a lovely game, so tense and stressful. It took us forever but we finally managed to get the loot from all 3 safes and get to the roof.
*I’ve a tiny, tiny, sneaking suspicion that we may have gotten a minor rule wrong… but hey, I won’t check if you won’t!

It was late and we were really tired but were all on a high from the collective victory, and so for some reason we tried a 3player game of Fort. It collapsed after a few rounds due to tiredness, maybe not the best choice to teach/learn late at night, but I’d definitely be happy to start with it next time as I was just getting into it when we hit the wall of yawning and had to stop and go home…

Hurray for in person gaming, with real, fleshy humans in glorious 3D. Oh how I’ve missed you so…

BGA On-going: GWT is in beta now. We started a game without reading the rules. It’s going… … somewhere … in circles. (I did watch a How To Play but that just isn’t enough). A well, my friend is experimental, so it’s fine.

I love GWT so happy to run through it with you

Galaxy Trucker teaching game, but I took 4 rough road cards and managed to be the only loser - on the last flight, faulty connections were the thing I focused on in building (triple only to triple connectors), so I kind of forgot about unionisation and ended up with 12(?) cabins. Bad luck (reroll misses) and meteoric inversion punished that error, so at the end of the flight I had to pay out 36 credits for the lost crew! A hilarious comedy of errors for all involved, and very satisfying to have one player put it straight on his priority buy list and declare that playing new games with me was always dangerous for that reason.

Pax Pamir 2e, so good not having to teach this! 3-player game that started with each of us supporting a different faction. The afghan armies I put out were surprisingly followed by a string of afghan patriots, so one player bought in, later followed by the other orchestrating a couple of betrayals to do the same. Just generally, so many betrayals in this game, it was great.

Mage Knight. First outing for this in a very long time. I taught but did not play in a 4-player reconnaissance game. Actually just so good to see this on the table, even if was just supervising!

The Great Zimbabwe. Another teaching game. I am beginning to get the hang of it, but it’s one of those games I suspect only really begins to show its true colours once everyone is up to speed…