I couldn’t bring myself to put this in the “Not Games” section, even if they don’t often feature a board. I’m a fairly casual fan as puzzlers go, but I do have a small collection and a few achievements to tout as well.

Until fairly recently, I was mostly into smaller puzzles—the kind you might get as a stocking stuffer during the holidays. As a fan of dexterity games, I got more from those goodie-bag ball mazes than most. On that note, I’ve been sharing around my copy of the Inside³ Legend “Castle” puzzle recently, which is a hoot: 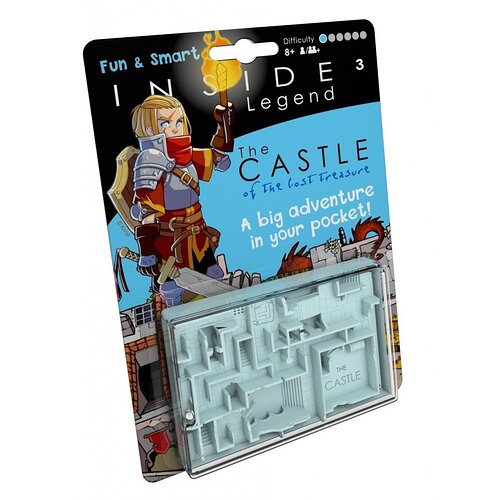 Basically WYSIWYG in the image there, except that hidden underneath is a blind labyrinth. You need to reach the “map” section and then reach the treasure, which is easy enough, but then you need to make your way back, which is filled with dead ends and pitfall traps. As a puzzle it’s pretty easy but as a speed challenge it’s dynamite!

And on that note, let’s talk about twisty puzzles. I can (or could… I’m out of practice since being off work) solve a Rubik’s cube in well under 60 seconds, have solved ridiculous variants of the same via the “ghost cube” and “ghost hedgehog”, am poor at but can otherwise intuitively solve the Skewb and Pyraminx (among many others), with the stupid 2x2x2 Rubik’s cube landing firmly as my nemesis.

And this is without even mdntioning the hours I’ve spent on logic puzzles and riddles, etc.

So who’s into a good mental challenge on the less interactive end of things? Jigsaws, burr puzzles, boxes, sequential, twisty… it’s all fair game here. What do you use to exercise your brain?

[EDIT] Cripes, I didn’t even mention Picross/nonograms and associated word and number puzzles here. I will refrain from admitting how much Picross I’ve played for my dignity’s sake, but they’re welcome here too.

My favourite puzzles are all made by Zach of Zachtronics, and I suppose Witness too.

I think for the same reason I enjoy Lockpicking Lawyer, it’s quite chill.

Despite having lots of games I could solo, I did pretty much zero solo gaming during the pandemic and got heavily into jigsaws instead.

Here’s my collection, with the completed ones marked off:

They’re really handy for something physical to do so I don’t get distracted while listening to a podcast, etc.

I enjoy jigsaws quite a bit. But, much like the case for solo boardgaming, I just don’t have the space to leave them out where tiny fingers won’t get ahold of the pieces.

My partner has been buying me Perplexus dexterity puzzles occasionally for the last few years. More of a dexterity game than a puzzle, it does take some amount of puzzling to figure out some of the maneuvers needed to finish the maze.

Similarly, as the resident family-analytical-person, I occasionally am gifted wooden logic puzzles (which I do enjoy as well).

I’ve been following Zachtronics for a long time and his output is, by far, some of my favorite time spent – I’ve even learned a lot in the process!

I have 7 games on my phone that I try to do the “Daily Puzzle” every day. A B&W (traditional) nonogram, a color nonogram, a Killer Sudoko, a mahjong puzzle, 7 Little Words (word puzzle), and 2 logic puzzles (0h h1 and 0h n0).

I don’t own any, but I’ve had fun playing with - I think the term may be “3d maze ball” (ETA: “Perplexus” looks like the same sort of thing only better), something like this: 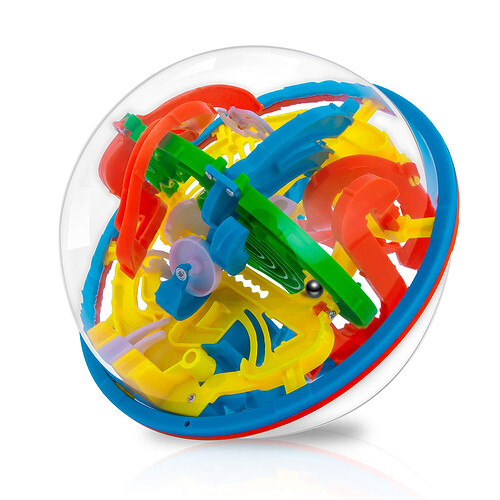 so if the ball comes off the track you have to redo from the start.

The actual puzzle is figuring out where in the maze you can use a flick of the wrist to short-cut that beginning bit that you’ve already figured out and just can’t be bothered to do every time.

I’ve spent an awful lot of time on the Perplexus/perplexus-likes. Worth nothing I saw recently that Perplexus and Rubik’s seem to have shacked up: 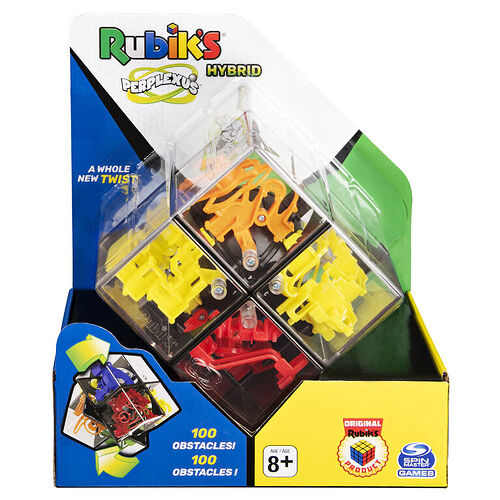 I bought this pack the other day

They are all basically interlocking wooden pieces. I’ve taken apart one of them, but I’m a bit lost as to how to put it back together (there is a sheet explaining it, sort of). The other two puzzles I cant even see how to take apart.

You might have a sneaky dexterity puzzle on your hands. Consider not just the sequence of reassembly but the concurrence of a given step. I’ve come across a lot of puzzles that boil down to a dexterity challenge for the reassembly phase.

Thought of Perplexii the moment I saw the first post, and sure enough, that’s what comes up … Who needs circles of hell when you can have spheres of hell? A whole nother dimension!

And I’m just guessing that whoever invented that Rubiplexus thing used to work in a KGB torture chamber, because that is horrifying

There are two rubiks maze games and I think I read one of them is way better than the other.

I tried my first 2 jigsaw puzzles this year since I was about 8 years old. Naturally I went straight to the 1000 piece, and then found them to be the most addictive things ever. 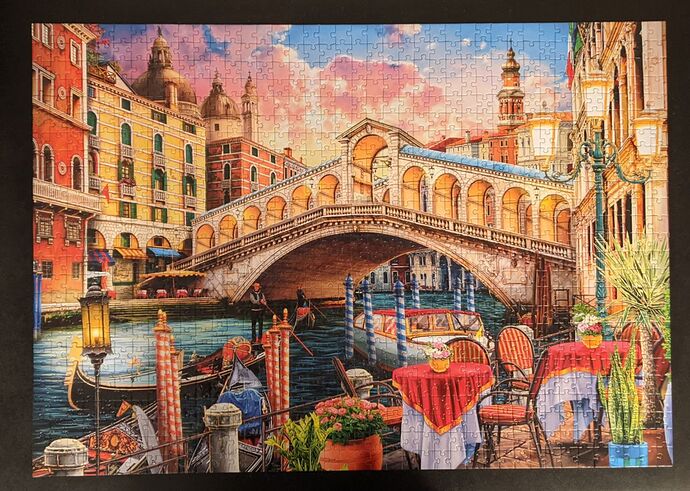 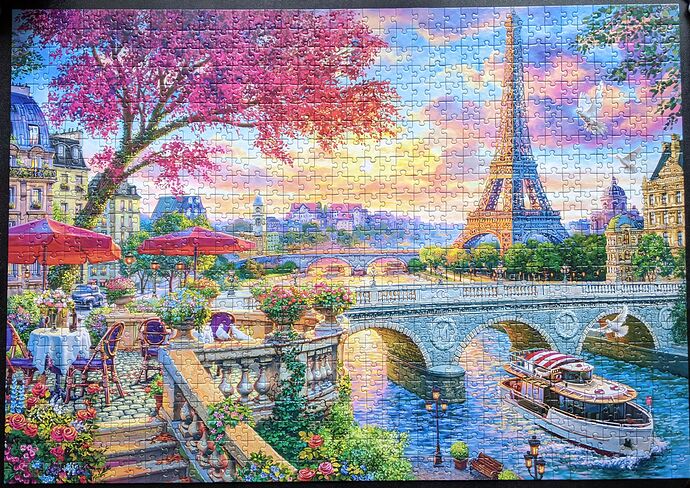 And yes, those large areas of pink trees or pink clouds WERE all identical and took ages to solve, yes.

My wife and I quite often do jigsaws together - its quite a relaxing and easy way to just spend time together. @pillbox you need to get yourself a puzzle roll or folder - we store ours under the sofa.

And yes, those large areas of pink trees or pink clouds WERE all identical and took ages to solve, yes.

Large areas of flat/similar colour are the worst. There are bits in two of the Critical Role puzzles I have that are just large blocks of plain white, so all you can do is site there and try each piece one by one.

Several of the charity shops here seem to be informal jigsaw puzzle lending libraries – buy it for £2 or whatever, do the puzzle, give it back to that or another charity shop.

A friend of mine does this pretty regularly. And so does my mother-in-law. Both have independently found that there are (apparently?) “better” puzzles than others as determined exclusively by the brand. So while a puzzle of certain brands may go for $12 at a charity shop, an “off-brand” one would go for $1.50.

Both have decided they really notice a difference between the brand-name and the off-brand puzzles.

Yes, better quality puzzles have better bonding between the base layers, and picture layer, and they’re better cut out with better fitting pieces.

Another fun thing is that many puzzles from the same maker are cut using the same jig, so it’s possible to take part of one puzzle and transplant it into another. My daughter had a puzzle of cats, and I would remove some of them to insert a truck from another puzzle. she hated it.

We can’t do big puzzles, because of our cats…

Dave Gorman did a bit on this in one of his shows: Video cut off early… not sure if he arrived at any particular conclusion. But I would say that the “every puzzle is cut differently” claim probably has more to do with die-cutting x/y offset more than a unique cutting jig.