PBF Roads & Boats "A River Runs Through It" cooperative puzzle

As an introduction to Roads & Boats, I’m hosting a single-player puzzle, as discussed over here.

To play, I think this is all you need to know:

Other :
• When researching a transporter tech, may immediately upgrade any corresponding factories where own transporter is present. One-time use at the moment of research.
• Conflict, phase order rules and walls are irrelevant for single player. 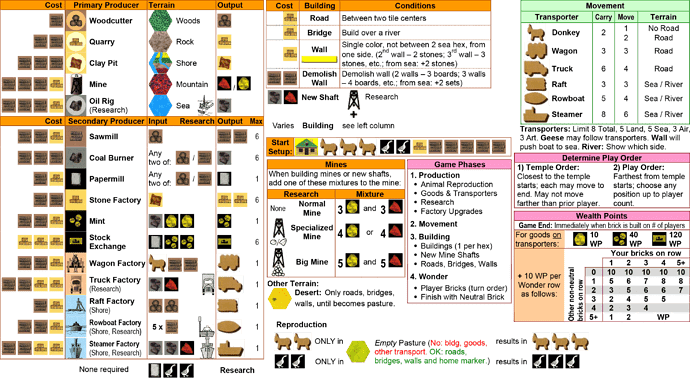 And here is the starting setup:

Aside from the map, the only thing of real interest depicted here is that it’s the 28th brick that will irrigate the deserts.

The first thing everyone needs to decide on is whether or not you’ll tackle this with or without any outline from me of the problem and challenges, and with or without a target score to aspire to.

The second thing is where your home tile will be, and (probably) on which side of the river each of your pieces will go.

My instinct is that home base should be east of the river. Thoughts?

Will read the rules after work and then have a think

I think cardinal directions are clear enough, but I’ve added coordinates to the map for extra clarity.

I’m mostly busy today, so don’t wait for my input!

@Benkyo what’s that symbol where we have to place the 1st brick?

Set up base in 2-3. If we setup east of the river technically we don’t need any bridges to reach any hex, and it gives us access to two pastures, perfect for breeding.

Spend turn one sending a donkey to the woods to build a woodcutter, everyone else stays at base and builds a saw mill.

I also think breeding is going to be useful.

Are we able to move 2 donkeys to an empty pasture in a single turn?

A question - is this like Antiquity, whereby it looks like an economic/ farming puzzle but is actually something else?

We don’t need the saw mill in turn one.

So two donkeys to the other pasture.

One donkey with two panels. One to build woodcutter one to carry onto the next turn and build a stone cutter.

No. That doesn’t work, because you can’t get to the forest direct from the stone.

Things that might be worth discussing: how many geese do you want, total, for which research? That’s a game-spanning decision, assuming you will build on the pastures once reproduction is done. Which hexes are going to be for which buildings? You are very cramped, so it may be best to plan uses for all of them now.

We need a sawmill, a woodcutters (or 2) a quarry. a mine and a papermill.

Which leaves us one square left. (The hex top left probably?)

This also ignores the sea tiles, we would need rafts for them?

Hmm. Hmm/ If we agree that our starting hex is the northernmost pasture we could get a lot of goods back there with rafts?

Sea is only good for fuel, but you will need to find space for either an oil rig or a coal burner, and a mint, and a stock exchange.

Hmm. If we push for the irrigation, we could use the two desert tiles for mint and stock exchange?

Set up base in 2-3. If we setup east of the river technically we don’t need any bridges to reach any hex, and it gives us access to two pastures, perfect for breeding.

Spend turn one sending a donkey to the woods to build a woodcutter, everyone else stays at base and builds a saw mill.

I agree with this starting base. Agree with donkey to woods to be woodcutter

However then I’d move remaining donkeys to 3-3 to reproduce next turn.

How do we score points? Is it all about the wonder board, which is 10 points/ layer.

(I don’t really know.) Something about money?