I suppose that limericks could go into the general thread about jokes, being a form of humor. But I think they’re distinctive enough to merit a thread of their own.

One of the odder things I’ve encountered in limericks is one with several fairly different last lines:

There once was a man from Racine
Who invented a fucking machine.
Both concave and convex,
It could fit either sex . . .

(I have my own preferences among those, but I’ll hold off on announcing them, in case any of you want to decide on yours.)

I like Limericks with internal rhyme, such as the famous one about Lord Buckingham and the summer sports of Cambridge. But I’m nowhere near good enough to write them. I think the best I’ve ever done was

When I was growing up my family had an elderly friend who used to visit us at Christmas. My father gave him The Lure of the Limerick one year, and he developed into quite a master of the form. Not only did he write topical limericks satirising cultural and political event of the day, but he wrote long sequences in which he set himself extra hurdles, such as his 117- Limerick cycle Who Killed Cock Robin, in which each Limerick rhymed the name of a type of bird, and The Great Robbery, in which each Limerick rhymed a dactyllic surname, such as “Chattaway”. There was also a cycle based on different arrangements of the syllables in the phrase “grey-green grosgrain”, and one detailing at lengths the adventures of a corrupt and unfortunate union organiser “Norman B. Gorman, foreman of storemen”.

When my brother Frank returned home for a year working as a prospector in Western Australia, having used his train fare to send his dog and having ridden across the continent on a trail-bike, Hugh wrote:

And with regard to his own meticulous, not to say fussy, care with weather reports and flight plans, he wrote:

“I will fly”, said a pilot named Hugh
“Through this fleecy white fair-weather Q.”
But that innocent cumulus
Concealed a large tumulus;
Hugh flew out with his wing all askew.

There were hundreds and hundreds of them, now sadly lost. The last repeated above stuck in my mind because of the internal rhymes.

I find entertaining verse that does not have the standard limerick form but is unmistakably “limericks,” such as the poet who came from Japan.

There once was a man from Novosibirsk
Whose life in the tavern was full of good cheersk.
His comradeship ends
By leaving his friends
Alone with the bar-bill to pay for the beersk.

A dimwitted fellow named Thor
Found limerick writing a bore.
He was often dismayed
When his interest would fade.

There was a young man from Trincomalee
Whose limericks had a strange property:
They stopped at line three.

There once was a man from Purdue
Whose limericks stopped at line two.

There once was a man from Verdun.

There were hundreds and hundreds of them, now sadly lost. The last repeated above stuck in my mind because of the internal rhymes.

I long ago encountered Isaac Asimov’s book of his own limericks, which I’m sorry to say i thought uniformly bad. Those of Hugh’s that you cite are better, though I’m not sure the line “On a 125-cc Honda” can be made anapestic.

Addendum: On further thought, yes, it can: On a one twenty-five ceecee Honda.

So… do people actually write new limericks? I was always under the impression that the same old limericks had been circulating the world for a hundred years.

So… do people actually write new limericks? I was always under the impression that the same old limericks had been circulating the world for a hundred years.

Some of them have to be more recent than that, I think. But also, I at least have composed a new limerick. A friend had recited two limericks to me:

A zoologist’s daughter named Ewing
Gave birth to a bottle of bluing.
And her father said, “Flo,
What I want to know
Isn’t where, but what you’ve been screwing.”

Flo answered him, “Father, I think
That the bottle’s not bluing, but ink.”
Said her father, “I see.
Then the father must be
The old squid that I keep in the sink.”

I went out to run a short errand, and as I was walking back, a further installment came into my head:

Said the squid, “You can’t pin it on me,
For the ink’s royal purple, you see.
You daughter’s had sex
With the giant murex
That swims the Tyrrhenean Sea.”

Those put me in mind of a famous philosophical poser and answer that were published in the form of Limericks about a century ago.

There once was a man who said “God
Must think it exceedingly odd
If he finds that this tree
Continues to be
When there’s no one about in the Quad.”

Dear Sir,
Your astonishment’s odd.
I am always about in the Quad.
And that’s why the tree
Will continue to be
Since observed by
Yours faithfully,
God

Two I know can be written as equations, of which the one I prefer is 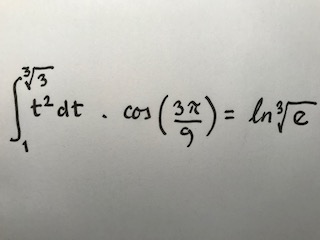 Those put me in mind of a famous philosophical poser and answer that were published in the form of Limericks about a century ago.

One of Alan Watts’s books offered

And I don’t remember the source, but there is

There once was a man who said, “Damn!
It is borne in on me that I am
An engine that moves
In predestinate grooves;
I’m not even a bus, I’m a tram!”

(a) Wow, that looks really complicated at first glance, but examined closely it turns out to be trivially true. Some of the expressions are carefully contrived to fit the meter . . .

(b) Is “three pi on nine” idiomatic Australian? In American it’s “three pi over nine,” which actually fits the scansion a little more easily, I think.

Popping in to lower the tone.

This one is Kingsley Amis. Or possibly Robert Conquest. One or the other.

There was plenty of good natured chaff
When I popped in to **** the giraffe
And the PRZS
Could hardly suppress
A dry professorial laugh.

And here are a couple that I enjoy imparting to small children. One they are fiercely proud of being able to pronounce, and the other appeals to the juvenile sense of humour.

A mosquito was heard to complain
That a chemist had poisoned his brain
The cause of his sorrow
Was para dichloro-
diphenyltrichloroethane.

A creature of charm is the gerbil,
Its diet exclusively herbal:
It munches all day
On bunches of hay
And farts with an elegant burble.

What does PRZS stand for? I can’t find it on Google or via Duck Duck Go.

President of the Royal Zoological Society.

Popping in to lower the tone.

Oh, if you want low limericks, here is my favorite:

Thus spake I AM THAT I AM:
For the Virgin I don’t give a damn.
What pleases me most
Is to bugger the Ghost
And then be sucked off by the Lamb.

President of the Royal Zoological Society.

eeeek!
You win; allow us to present you with this commemorative thunderbolt-proof hat.