Not sure the podcast is all that informative, as it sounded like they just marched up to each other and attacked back and forth until someone died. To be fair, they described three games, and that was only how one was played, but that is definitely a poor example of how to play.

As @yashima mentioned, there is a tactical positioning element in the game, which may not be for everybody. Each fighter has a different special ability and deck of cards, meaning some fighters can have a big advantage over others, but be disadvantaged against others. That can also turn people off. But this can also mean an experienced player can choose a fighter that is weaker when playing with someone new to the game.

They were definitely wrong in the podcast about people having mains, or there being a competitive scene. There most definitely is room for such a thing, and it is quite active. But all that shows is that games will click with some people and not others.

I picked up 303 Squadron this weekend and am about to dive into what is expected to be a struggle with the rules. This is the only thing in my collection that even remotely resembles a wargame but something about the scope and presentation managed to stand out to me. I think I just really wanted to push planes around a big map, and the fact that it’s a cooperative game made me especially curious about solo play.

Anyway the ruleset seems pretty simple, but most people have reported the classic double-whammy of a poorly vetted rulebook with a bad translation. So far I’ve found it quite easy to get through, but we’ll see how stymied I get once it’s time for takeoff.

It’s a gargantuan map (~120x80cm if I had to guess) with only a strip reserved for a turn counter, so the fact that the components are kept to an absolute bare minimum is greatly appreciated here. I’ll make sure to take a snap once I’m set up to play.

I don’t know if you have Tabletop Simulator, or your hours of availability, but if you would like I would happily run you through a game or two sometime.

There is also a digital version in the works, which from my understanding will be released on Steam first, and Android/iOS and Switch later. Only issue will be none of the licensed fighters will be in it, due to licensing. Just public domain. I do not know the release date for that, though.

Interesting. Does this imply that they are really more interested in theme than balance? Or is this more of a newby thkng where certain characters are close to full power on the first play while others take time and nuance?

Stellar Conflict. Which was a name I didn’t recognise, but I looked it up because it was on sale for cheap, and it turned out to be a reimplementation/variant of Light Speed which is a game I do know about (and own, in its colour version). It’s a neat wee design which is not like the other games that I’m familiar with, so into my cart it went.

Paging @Benkyo in case that information is of interest, given How many on the Top 100 BGG...? - #51 by Benkyo (but also noting that the two games are not identical).

Any particular reason to prefer it? It would take a lot for me to switch away from the nice circular cards I had printed for Light Speed.

I’ll be honest – I’m not sure if I’m actually going to like this better than Light Speed. I’m simply not sure this style of game needed any added complexity, or will actually benefit from it. But I say that without having tried it, and I felt it was still worth a punt regardless. Hopefully, when I get to play, I’ll find myself in agreement with the reviewers who say it’s an improvement.

FWIW my initial impression is that, for better or worse, this new version leans more heavily into the “unpredictable chaos” side of things with its added variations, whereas I think that Light Speed, with its common/consistent components between players, gives you slightly more of a chance to understand and control things (even if it’s regularly chaos in practice).

In Stellar Conflict, the other players not only won’t be playing from the same standard set of ship types as yourself each game (as each player now has a distinct race with its own ships and special abilities), but they probably won’t even be playing the same specific set as they did the previous round with that same race (because you now choose from a larger pool of ships within your race). The ship variations in numbers, types, and directions of lasers shouldn’t matter too much – you’d be reading that from the cards in any case – but with the special race ability and with a few ship cards also having their own individual special abilities, the chances of you understanding the state of the game during the card play phase seems like it would be significantly reduced.

Not that you ever had much time to figure things out – and my best-laid plans would commonly go wildly awry in Light Speed – but I at least had the illusion that I could keep track of what was going down and make informed responses. The new rules make me think it’s even more of a “hope for the best and see what transpires” experience, though.

Depending on the players this extra uncertainty might add to the fun, but I wonder if for some people it might make the game feel a bit random or unfair in ways that Light Speed did not do. Light Speed is a game I’ve always thought that you can teach in a couple of minutes and then start throwing cards down and having fun – and you might get annihilated, but you see exactly why that happened as the resolution plays out, and moreover you know that you could have done the exact same thing to your opponent. With all the asymmetric changes in the new version that’s no longer necessarily the case; and you might feel that you executed everything pretty well but were undone by the unpredictable nature of your opponent’s deck (or the admittedly-more-predictable nature of their race).

I don’t want to overstate the concerns, though – it’s surely still going to be an ultra-fast and silly game of playing your cards in a panic, laughing at all the unexpected outcomes as you figure out who won, and then doing it all again a few minutes later; so it’s not like a bad outcome is going to spoil anyone’s evening! As such, I’m hoping the changes ultimately just enhance the replayability.

I do wish the amount of damage a ship can take wasn’t now printed as just a number on the card, though. Light Speed had big red circles for hit points which were instantly comprehensible from any angle, and I reckon they should have stuck with that approach.

I hadn’t realised the new version of Libertalia was coming so soon! It’s apparently out end of next month, so I’ve pre-ordered it. 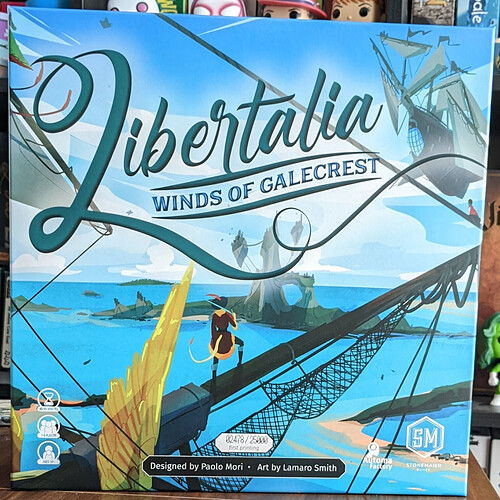 Is it just a reskin or did the rules change too?

It is not just a reskin. ThinkerThemer did a decent summary: There’s also a quick summary of the changes in the rulebook: 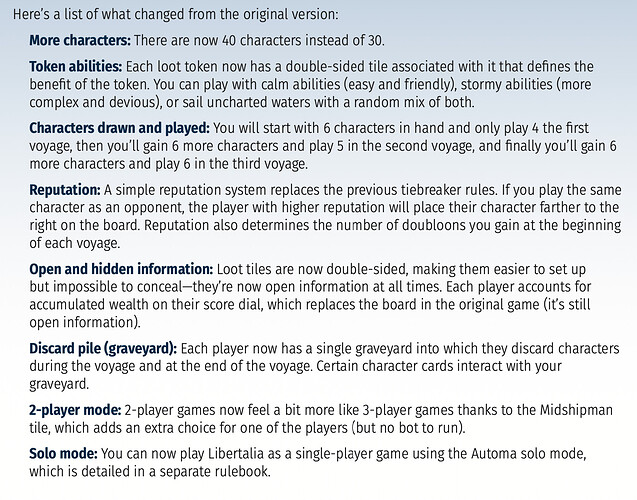 So glad I shifted my oldschool copy before they announced the reprint. Didn’t get on with it at all and made a small profit on it as opposed to it being worth nothing.

I found it needed a decent number of players up for some sillyness, but was a bit fiddly and someone always didn’t listen properly to the rules. Hopefully you have better luck

. Let us know how much fun it is so I can regret my choices

Today I formally “brought home” Hand of Fate: Ordeals, which has actually been on my shelf for the last month or so. A friend had loaned it to me and I warned him pretty early on that I’d be angling to keep it permanently. As a deckbuilder it’s got a bit of an old (read: dusty) feel to it, but it’s paired with this fabulous adventure element that, for me anyway, really captures the best parts of the video game (based on a fictional board game).

This wasn’t the full Kickstarter package, but it was one of several “whoopsie daisies” retail boxes that shipped with the bulk of the extra gameplay materials included. This means I’ve got some additional cards and modules, and importantly I have the stuff I need to run the endless/roguelike mode, which looks awesome.

It’s funny, I don’t think it’s an especially exceptional design or anything, but something about the loop is just a pleasure to engage with. The lavish artwork doesn’t hurt, either (this is an example of Ian O’Toole flexing his whimsical muscle a little, by the way).

I’m all laid out for another run whenever I can get to it. Soon would be great!

Next time we meet for games I’ll be much nicer to you and make you play games you don’t like.

A preorder I had placed finally came in with:

If it doesn’t work solo and/or 2-player

No Pun Included have put up a video TODAY saying it’s good at 2-player (arguably better than 3-4).