Surprising rule error in this one (there’s nothing preventing the Recruiter from moving onto spaces with the Rogue Agents). I’m curious if Quinns was playing with this rule the whole time. It would certainly change the balance!

Oh no! The hype is going to make this one disappear quick, and I had my eyes on it… darn!

Gah, I promised myself I wouldn’t be interested in this one but they’ve done it again. I’m intrigued now.

A couple of other channels I follow have it very high on the list for 2021, if not top, so that had me hooked for a while on the title. We’ll see when it reaches these shores…

Is that so? He really emphasised that point too.

It is so! That’s why I was so surprised it was emphasized such. The relevant rule is:

You may move to a location occupied by an Agent (and you do not have to reveal that you’ve done so!)

Missing period is a [sic].

I could feel my will to live ebbing as Quinns went through his infomercial-style “but wait, there’s more” phase of this review. I generally enjoy the puzzle of these sorts of games, so I could probably get into this – but if I tried to teach this to other people in that style I’m convinced their eyes would glaze over and they’d be looking desperately for an excuse to leave and play a different game at another table. Not on my to-buy list.

Yeah, sounds like you really have to love this style of game, and I don’t think I do.

Unless I missed it, I’m pretty disappointed that they chose to use the (very unobtainable, effectively KS-exclusive) deluxe edition of the game for their demo, yet made no mention of the regular edition (despite raving about its price). The deluxe edition is double the cost and basically impossible to source in the first place.

To anyone whose interest was piqued by the review, rest assured there is NO content missing from the retail edition (actually, contains one exclusive Easter egg), and the differences are entirely cosmetic. This comes with the perk of being almost half the size, too.

Yeah, sounds like you really have to love this style of game, and I don’t think I do.

There are quite a few ratings for the game on BGG that speak to the contrary, but honestly I think you’re right and would caution folks who dislike hidden movement games to be wary about that. The one thing I do think is worth noting, however, is that Mind MGMT is a brief game—It’s basically done in an hour every time. If someone enjoyed the genre but not its tendency to drag, I think this might be one to look at.

Unless I missed it, I’m pretty disappointed that they chose to use the (very unobtainable, effectively KS-exclusive) deluxe edition of the game for their demo, yet made no mention of the regular edition (despite raving about its price).

It’s a pretty big oversight. They put a pinned comment on the video:

Shut Up & Sit Down1 day ago

Update! Until this review was published we had no idea that we were sent the Deluxe version of this game. In fact, we didn’t even know multiple versions were available- when given the choice, it’s site policy to ask publishers to send us the basic retail version of the game. Apologies for presenting the Deluxe version as the base game. Also, as everyone has pointed out, it turns out the Recruiter can move into spaces with Rogue Agents, so perhaps it’s a little trickier to learn this game than we thought. It’s worth stating that even though Quinns was playing with an incorrect rule, him and his friends still had a blast, so the game is - in addition to being fun - pretty sturdy!

I could feel my will to live ebbing as Quinns went through his infomercial-style “but wait, there’s more” phase of this review.

I got the impression that Quinns was pointing up just how many “but wait, extra thing to remember” moments there are. I don’t as a rule find teaching board games “insurmountable” – I like to think I’m quite good at it – but I don’t want to be fighting the game while I do it.

So trying to capture takes up all your actions for a turn? Sounds familiar… and I must admit I’d have liked more comment from Quinns on not just the new thing but on how it fits into the space that already contains these old things, why I would buy this rather than that older game. Eh, perhaps I’m asking him to be a critic rather than a reviewer. And it looks as though Whitehall Mystery is no longer in first-sale retail anyway, and not easy to find second-hand either.

(But actually the vast majority of times I play games it’s the first time at least one person at the table has played that game. So if I bought this I would basically never get to use the expansions.)

I really like the look of this, but listening to the review I also know that I would not enjoy actually playing it. Ah, well. I’m not really in a buying mood anyway (The Campaign For North Africa still casts a long shadow across my game budget!

It’s a pretty big oversight. They put a pinned comment on the video

They really have demoted their web site to second-class citizen status, haven’t they? : \

Such is the modern internet. 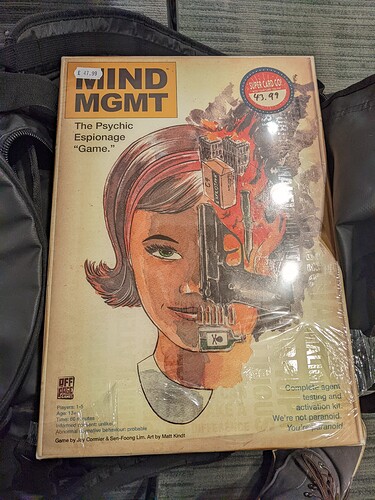 My eyetest was delayed because of leg cramp (that’s a sad insight into my life you didn’t want), so whilst waiting I went into Traveling Man and saw this on offer. When I took it to the till got told someone had just phoned up to see if they had a copy, so was lucky there. 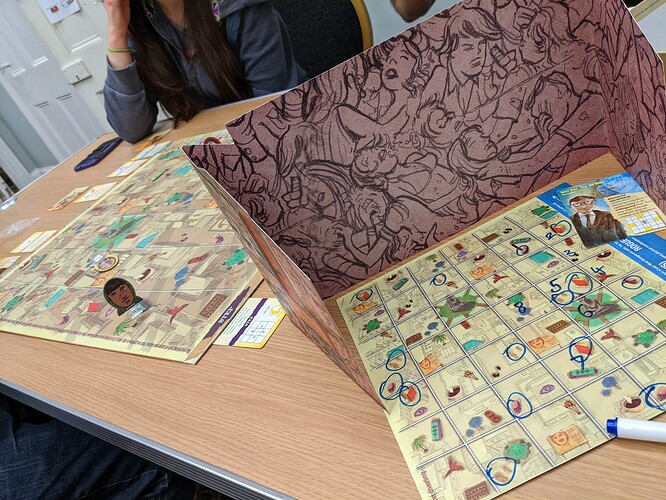 Played it twice at the board game club, both times training mode. Really liked the training mode- super simple and really pacey. Need to delve into the game proper to see if the whole thing is worth it. I’d pay £20 for the training mode on its own though.

I also got the recruiter movement rule wrong it turns out! Although there’s definitely something about being blocked in in the rules.

I know why now- in the full game they talk about Mayhem and how that can block you in, but you skip over all the Mayhem rules for the training game (it’s in a different colour), except for when talking about being blocked in when moving. Because you don’t know what Mayhem is, but you know something blocks you, the brain settles on it being the rogue agents.

I was so confused by that shadow on the box photo. I thought it was a really huge dent…

Well this made me interested enough to try and get hold of Whitehall Mystery (which seems a great deal more accessible) while I wait for the new Kickstarter to see if I’d actually be interested, but it doesn’t seem like Whitehall Mystery is available… anywhere? Best I could find was >£100(!) second-hand. Would love to find a copy since I haven’t played any hidden movement before. Alas.

I did decide to order the first comic book omnibus to see what the source material is like, since the art is so weird and lovely.