So this page appeared on the internet a few hours ago:

Deep inside another dimension, face battling barbarians and evil magic on a quest for adventure in a maze of monsters. This is HeroQuest, the fantasy adventure game, where winning means mastering the art of combat and magic. Once you get into it,...

And it is on "heroquest. avalonhill .com " which suggest a boardgame instead of a computer game. What’s very interesting is that Hasbro moved the board game part of the company out from under Wizards of the Coast just this week. 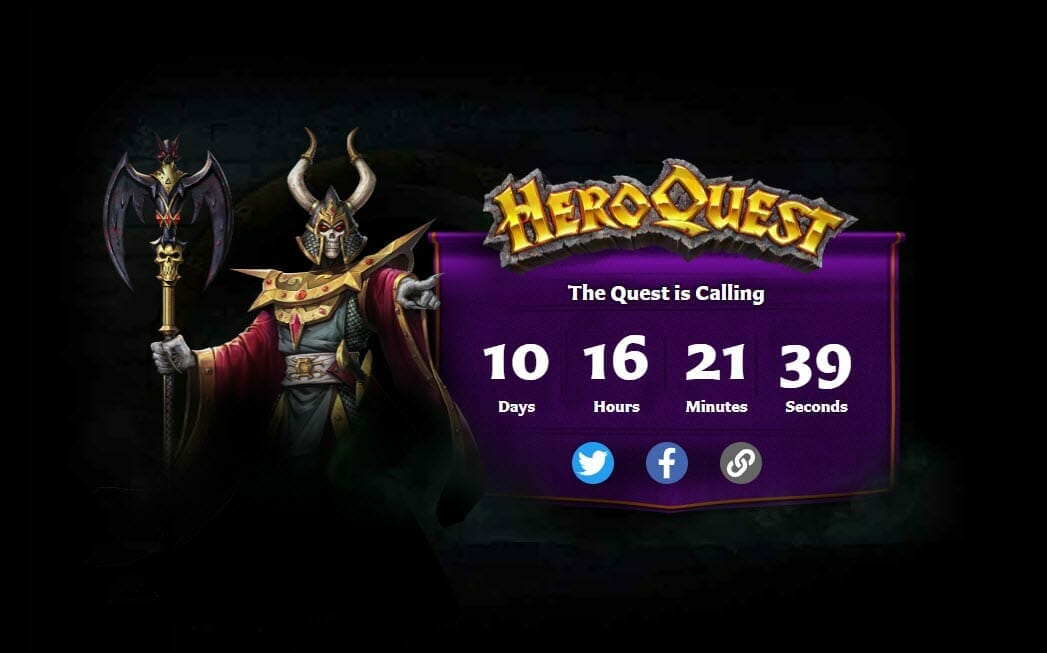 A new sub-domain on Avalon Hill.com has a 10 day countdown for Hero Quest. The Quest is Calling. 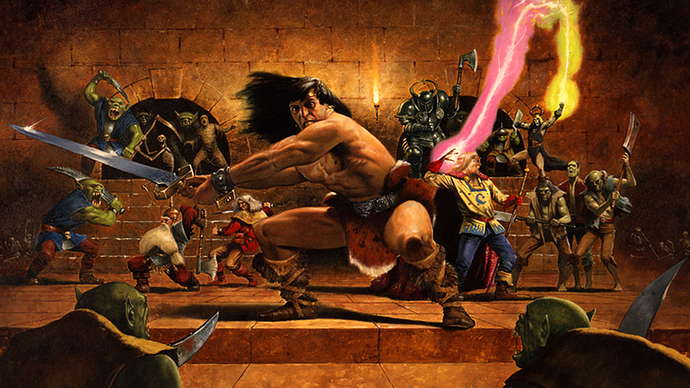 So… it COULD be a boardgame not a computer game? Or some kind of celebration of the “legacy” HeroQuest has left on the entire industry? I hope they know how much money they’d make with a board game re-issue, which is “ALL the money”.

So there’s two more bits of news on this:

So… maaaybe a boardgame?

Anything to stop HeroQuest fans whinging about the latest copy they found in a charity store missing bits. They are the worst.

Gotta admit, this is pushing to me look up copies of Advanced HeroQuest. One of the first, and best, things I ever painted was one of those skaven.

This suggests to me an app to make the big money plus a Restoration Games treatment of the boardgame,

Potentially an app for a board game, though.

Oh. Yeah, RG would consider that reasonable, after Stop Thief and Dark Tower…

I’ll be interested to see what they do with it. I think HeroQuest is a little too simple for me these days and I don’t especially want one-vs-many, but for example they made Dark Tower a coop game, so it feels possible that they might make an app-adjudicated full coop take. And if they did something similarly striking with the artwork and added just a little more depth? Yeah, I might bite.

So, looks like a straight-up remake of HeroQuest 1, on Hasbro’s own Kickstarter page (“Hasbro Pulse”). 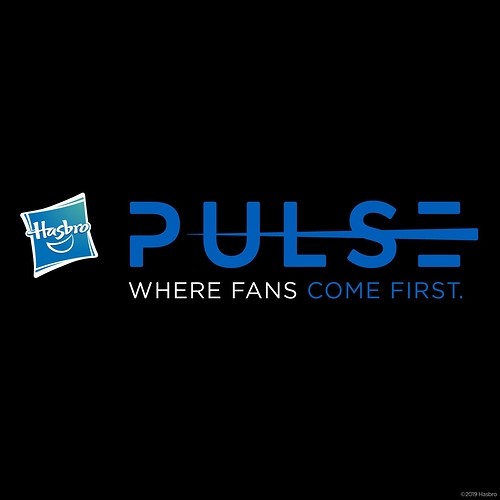 Click or tap outside the My Cart pop-up to add more than 1 quantity to your cart Not available to ship to Quebec, Canada. Deep inside another dimension, face battling barbarians and evil magic on a quest for adventure in a maze of monsters. This is...

Remodeled characters and box art, but all sticking to the original template. Same board, same spells (with one new category of “Dread Spell”).

Base game and the two original expansions for… $150.

And hey, if you do the “pulse” pledge, you get four extra bonus heroes who are the… female versions of the 4 heroes. As extras. F*** s sake, Hasbro. 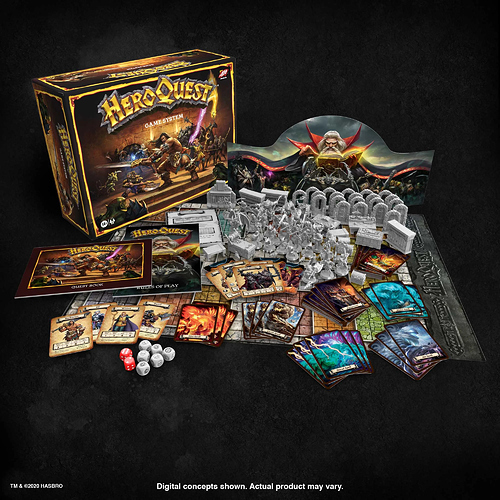 Oh, and it doesn’t ship outside the US and Canada. Hahahaha.

This is jaw-dropping. I’d have expected a full global release.

In Hasbro’s (very tenuous) defense, if they change too much, they’ll outrage the community that has been fanatical about this game for decades.

That said, I don’t see the value and I’m not impressed. I hope this is just “wave 1” where they sell a large volume to fund and justify future development of the brand.

I also expect that the US/Canada limitation is because there are negotiations in-progress with a company that wants (some of?) the RoW distribution rights.

Or maybe I’m giving them too much credit and this is just the first glimpse of a soon-to-be-train-wreck-of-a-cash-grab.

Oh, I think keeping it 90% the same is a good move - as you say, there’s a hunger out there for the original and it’s a classic.

Not $100, as part of a pre-production pledge kickstarter type thing. Those are supposed to be for a big discount - are they saying the final retail price of the base box will be over $100?

I’ve almost never gotten much of a discount by Kickstarting stuff.

But, yeah, if it’s just going to be the old game, pass. I have fond memories. I’m gonna let them stay that way.

I think the price is probably comparable to some equivalent KS projects. I expect that the limited release to US & Canada is completely down to licensing. Someone else has the license for HQ for the rest of the world. Sadly, this is not unusual. There’s been a fair few other examples of different companies holding the license to something but being restricted in the geographical area they can distribute. One example is Dr Who, which had different rights to license a game or RPG (I forget which) sold to two companies with different geographical distribution, partly helped by one company agreeing a deal with the BBC and the other talking to BBC Worldwide.

HQ was originally a co-production between Milton Bradley and Games Workshop. As I understand the situation not everything written for it was available in all regions.

If they were going for all-out nostalgia I think they’d offer a “collector’s edition” with all the expansion material. This smells more of “boardgames are big, this boardgame in particular was big, time for a new print run”. Approximately nothing Hasbro does is aimed at the sort of gamer who watches SU&SD; this will be ruthlessly mass market. (So how do they expect to compete with computer games, which beat up board games like this and took their stuff back in the 1990s?)

Available in the UK now too.

I simply cannot believe the £150 price is at all reasonable, but I have no doubt it’ll sell like crazy. 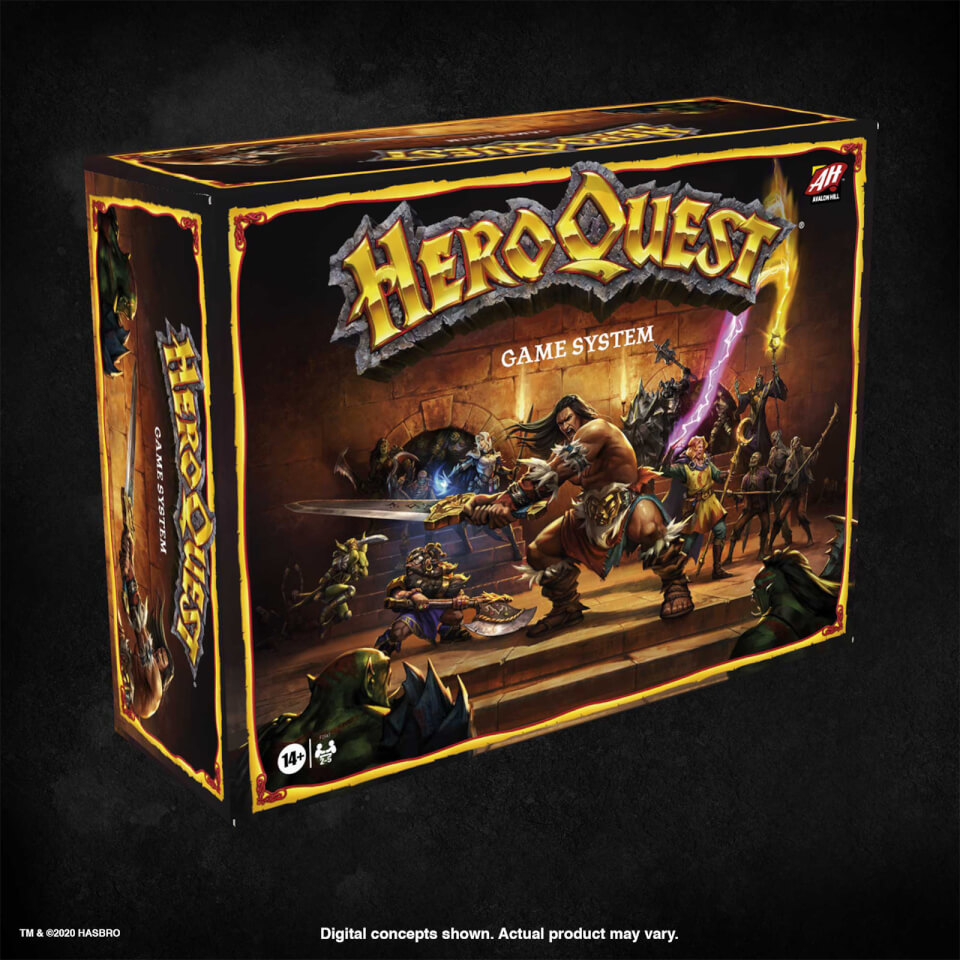 HeroQuest Board Game by Haslab, Hasbro

If this had been like $50 for the base game and $80 with the expansions, I may have had some interest. However, with the same roll-and-move mechanics, and the extra cost likely going into the increased amount of plastic, this is an easy pass for me.

I have fond memories playing this with my friend back in the day, and I always hope to stumble across a used copy at a Goodwill or something for $20ish. But games are so much better nowadays that I doubt this would ever see the table except as a one-time “well, that was okay” play.

Yeah, unless they’ve tweaked the rules I think even those of us who had it (and the expansions) first time around will find the gameplay REALLY basic compared to what we’re used to now.

(I would pay $150 for a new version of Advanced Heroquest. I have no shame there).

Never got around to Advanced. How advanced was it?