Welcome to our first game of Flying Frog Productions Fortune and Glory !

It is the late 1930s and the world is in turmoil. Humanity is on the brink of war as imperialist nations in Europe and Asia work aggresively to expand their domination. The Axis have taken control of Germany and now spread their darkness across the globe in their hunt for powerful occult artifacts that can give them the upper hand in the days to come. But the spirit of adventure and freedom won’t be stamped out so easily!

Heroic adventurers from around the world answer the call, racing against time to to hunt down ancient artifacts, explore deadly temples, and fight back the powers of darkness from engulfing the world. It is a race of good versus evil and only a cunning and agile explorer can claim the ultimate prize of … Fortune and Glory!

Our cast of heroes are:

They will be cooperatively working against … the Axis, fronted by their top agents Herr Teufel and Tresa.

We will go through specific rules as play continues but to read an essential rules summary, click below, or visit the game rulebook on the Flying Frog Productions website here. In summary, we are adding the Advanced Rules and the Optional Rule for Fixed Movement. We’ll cover these at each step as we get to them.

The initial locations and Dudley’s Gear card have been drawn, but first, this …

Important Disclaimer
Fortune and Glory is set in the pulp adventure genre of the late 1930s. As such, the original game includes enemies, villains and symbols of the Nazi party that had taken hold of Germany at the time. The use of their name and iconography for the original game is purely rooted in historical context and not intended to condone or glorify them or their actions. Given the digital nature and visibility of this game and risks caused by sensitivity or unnecessary attention, I will refer to that organization as the “Axis” and where possible have substituted the original name and imagery accordingly, although cannot promise that I will not correct every visual reference. As the manual advises, if you find this material strongly objectionable it is our recommendation that you do not use this product - or, in our case, follow this game.

@gmwhite999 asked for a die roll:
Here is the board for the start of Round 1. 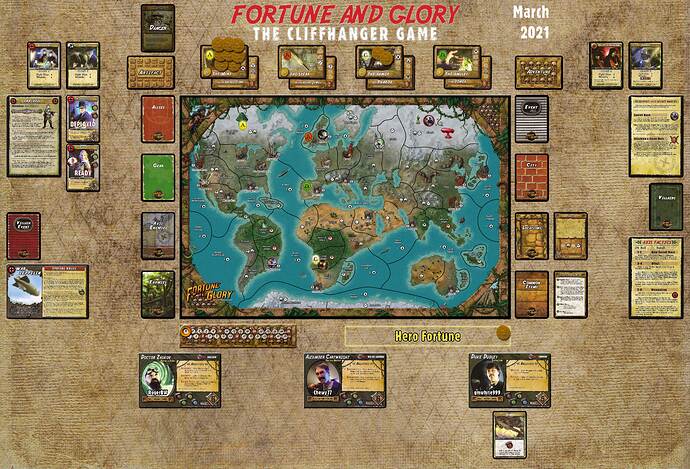 To win this game;

Game on, so let’s start with the first part of the round, and the Initiative Phase.

Okay, time to roll off then and then draw Event cards for Cartwright.

It looks to me as though Glory is the Investigation-equivalent, while Fortune is our victory points.

Suggestions: should we go immediately for Artifacts, or do other things to build up our strength first? I’m guessing the latter, but I don’t yet have a feel for what those things would be.

Ah that worked! Dudley will move and take his actions first, followed by Zhukov (@RogerBW) and then Cartwright (@Chewy77) as other moves go clockwise.

However, Cartwright gets to draw an Event card - and with his special ability, draws too and can choose which to keep. Your choices are:

Which card do you want to keep?

Exactly - Glory is our Currency - like Investigation in A Touch of Evil - and Fortune is the Heroes’ Victory Points. The best way to get Glory is to have fights or pass Danger tests while going for Artifacts.

As a cooperative game, we can agree our moves - and can even join up to to and collect Artifacts together.

There are two possible options for our movement, which each Hero can choose from on each round:

Each Hero must choose which option to take before rolling a die.

Note that we can all get to an Artifact site within 4 spaces at the moment.

If we split up, it would make sense for Zhukov to go for the Amulet of Power (Hahahahaha [cough] Da. Very serious business.) while Dudley takes the Spear.

Or the other way around. For a reminder for each Artifact on the cards at the top of the board, the number in the gold/yellow circle is the Fortune made when collecting and then selling the Artifact at a City, and the number in the Red Shield is the number of Danger Tests the Hero has to make to collect it. So, in theory, the Spear is much easier to obtain than the Amulet.

Also, maybe it makes sense for Dudley to roll for his movement. He only needs a 1 to get to hunt for the Spear, or a 2 to hunt for the Amulet - either of those rolls also giving him an Event Card - and if he gets a 5 or 6 he can make it across the North Atlantic Sea to the Great White North, making it there before Tresa will next Round. Then if I roll enough to get there, Zhukov can go for the two European ones, probably starting with the Spear to try for a quick win and some Glory too. Thoughts, Doctor - and Novellist?

@gmwhite999 asked for a die roll:
I’ll speed this up for Dudley by making a movement roll then, as even moving 1 space I can do something useful, and a 1 or 2 will get me an Event Card.

Ah ha! A 5 - so Dudley can make it across the pond to the Great White North and the Mines! I think I shall do that.

@RogerBW what will Zhukov do for his movement - move up to 4 spaces or roll?

@RogerBW asked for a die roll:
2 spaces gets me to Western Europe, so I’ll take the roll.
d6: 3

I think that gets me to British Isles (2 North Sea, 1 British Isles; or Germany, Western Europe, British Isles) so that’s what I’ll do, then go after the Spear of the Azure Jewel.

ETA: or do I need to move out of Moscow into Eastern Europe first? In which case I’ll go for North Sea and hope for an event card.

A City with an Anchor icon is a Port City (such as London) so you can leave/enter that from the adjacent Sea space too without having to enter the adjacent land space first. Note that a few Port Cities allow access to more than one Sea Space.

Each Sea Space shows the Movement cost to enter them in the white numbers printed on that space.

Note too that there are six “island spaces” which are treated as land spaces and ringed in black lines. Four of them - the British Isles, Japan, New Zealand and the Forbidden Island - can move moved on to by land from a neighbouring land space without requiring sea movement.

Let’s try for the Amulet.

Okay - Zhukov heads to Eastern Europe to adventure this round.

Cartwright (@Chewy77) next: do you wish to move up to 4 spaces or roll of your movement? Currently it will take 3 spaces to move to the Congo Jungle if you wish to race Herr Teufel to the Armor of Pharox?

(Additonal: I now realise I forgot to add Herr Teufel’s 2 bodyguards to the map at the Congo Jungle but will explain how they work when we get to the Adventure Phase.)

Too Close . Play to force a Test just rolled to be entirely re-rolled. This may be used on yourself or another Hero or Villain.

I think I prefer this card, it will be more useful against villains.

Cartwright (@Chewy77) next: do you wish to move up to 4 spaces or roll of your movement? Currently it will take 3 spaces to move to the Congo Jungle if you wish to race Herr Teufel to the Armor of Pharox ?

You read my mind, Congo is just a pond hop away, although I had not considered Herr Teufel would have a squad with him. Is it worth a go? I’d say yes, f… the nazis.

Quick clarification, we just get knocked down if we lose a battle, right?

And with not much to lose, I’d say let’s go to Congo, I think I’m up to date with my tropical jabs

If you lose all of your Wounds you get KOd, return to your starting city and lose d6 worth if glory, gear and allies. So yes, nothing to lose now. Plus there is added bonus for you. Herr Teufel was wrongly placed and should be in the Great White North with Dudley at the Mines, so I will move him there.

Cartwright heads into the Congo Jungle, so we move into the Adventure Phase… which starts with Dudley after the server migration, shortly.

Migration finished - I think! - so onto the Adventure Phase. Before we get on with Dudley, I’ll summarise the essential rules for this phase.