Detective: City of Angels - The Best Crime-Solving Board Game? 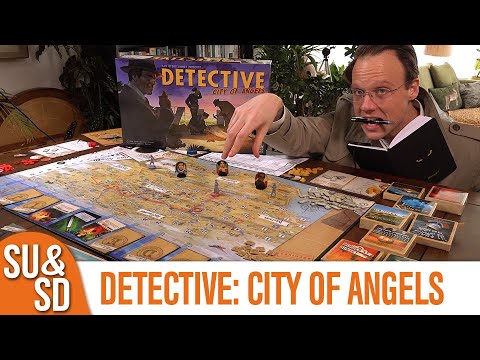 Has anyone on here played it? Quinns is very positive!

Hmm, drat. Another one for the watchlist/wishlist.

I love the look of this, but I think there’s only a tiny chance of me ever getting it to the table.

Was this not the one they ripped into the quality of the writing on a podcast a year or so ago?

I think that was Detective: A Modern Crime Board Game

Ah, that is an unfortunately similar name.

Honestly, I thought this was a sequel or expansion to the other one.

If it weren’t for having actually watched the review, I’d still be thinking that now! Surprised they didn’t even mention that…

Huh. I wonder whose coverage of this game I watched/read/listened to several months ago. “The Chisel” is such a recognisable element, so it’s definitely the right game, but apparently it wasn’t SUSD.

I’ve had an eye on this one for a while, because I remember seeing (nearly two years ago?) that other channels loved it.

“It was missing, like the theme in a Knizia Euro…” I had not seen that before. What a spectacularly well-produced video!

Paula’s stuff is great! Even if they aren’t all fancy and such like the above. They’re all funny.

One thing folks need to be aware of before they jump in: it comes in a BIG box. Like, Fireball Island/Warhammer Coffin box big. I got my copy just as the pandemic hit and sold it for space concerns, unplayed, quite recently (wishing that review hit earlier now).

It’s worth mentioning that the game does seem pretty robust as a solo and/or co-op experience, but you lose so much of the experience without the chisel in play that I couldn’t bring myself to spoil any episodes that way. So, off it went.

but you lose so much of the experience without the chisel in play that I couldn’t bring myself to spoil any episodes that way. So, off it went.

This is my concern with it. I would likely be looking at it mostly solo and it sounds like having The Chisel in play is where the game really sings.

At a con or games night I’d definitely make a B line for this game though.

Honestly, it kind of sounds like one player needs to “take one for the team” and play the cases solo, then run their friends through the game as the Chisel. Which would likely be the game owner. Which could be fine. Quinns said he had a blast playing the game solo, and then being able to mess with your friends as the Chisel could be great fun.

Yeah, that was my take away as well. And it’s certainly something I will throw on my wishlist in the off-chance that one of my family members buys it for me for my birthday or Christmas. But I’m not going to go out of my way to track down a copy.

It’s a game I could imagine loads of people running out to buy because of the review and then selling on. It’ll probably be about £20 secondhand in 18 months

Doesn’t seem to involve any component destruction, which I suppose makes up for some of the plastic.