Descent: Legends of the Dark Review - Enter the Digi-Dungeon 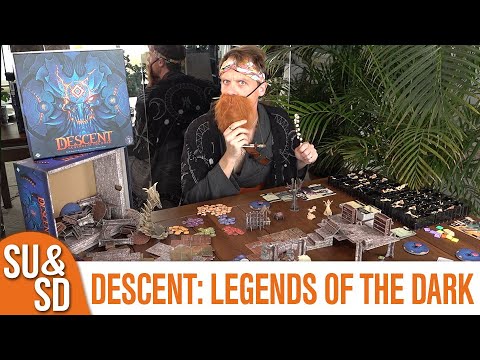 Hmmmm. I think that actually puts into words how I feel about Lord of the Rings: Journeys in Middle Earth. It’s SO driven by the app, that when you’re setting up the board to look like the screen it just feels as though the real game is on the screen.

It’s not that bad, because so much depends on the hand of cards and monster deck, but it definitely makes the board feel more like an echo than the primary location.

Yeah, I’ve got to admit, this is the first time I’ve ever thought… “Why wouldn’t I just play a video game?”

I don’t even play video games at all, ever, and I’m still thinking that. The app has all the stuff set up right there, why would I want to set it up again? They would have done better to just save the money from all that physical cruft and spend it on making a sort-of decent video game. If I’m gonna have that level of setup, I want the story to be my story. It’s like they’ve combined all the tedious work of organizing a D&D session with the inherent boredom of a mobile game, while simultaneously avoiding the redeeming aspects of both.

And a pro tip: if you ever have to tell the players what they themselves are saying, you’ve already failed. Pandemic Legacy S1’s greatest success wasn’t the extra rules, or the boxes of crazy crazy stuff, it was the little blank space at the top of the character cards, where you create a person. And that’s where almost all other campaign games fail; they don’t let you own your character. You don’t need to tell someone “‘This is terrible,’ you cry!” when they’re already screaming that at the top of their lungs, attracting the attention of everyone in the restaurant

A fine review and some lovely funny touches. I’m tempted by Gloomhaven or at least by Jaws of the Lion but I don’t have the time or patience for a long campaign. I recently bought the D&D Castle Ravenloft game at a good price to test a solo dungeon crawler but have not had the chance to play it yet.

Without having played it, I’d say go for Jaws of the Lion. I own Gloomhaven, I have played it a good 2 or 3 dozen times, and the downfall for me is dragging that heavy box and setting up every time I want to play it. I believe JOTL saves you a good chunk of setup, and from what I hear, you don’t lose any of the experience.

Sounds like although the app gets a lot of (negative) attention in the review, the main problem is simply that it is a boring game. Missed opportunity, especially in the post-Gloomhaven world.

Throughout the entire video, I was just thinking two things on repeat:

I’ve not looked at prices, but Imperial Assault is essentially a refinement of Descent 2e. I own both and I’ve had fun with both, but if I could only keep one it would be an easy decision to pick Imperial Assault. Unless you prefer Terrinoth/fantasy over Star Wars/space opera, I’d recommend it over Descent.

I’d second @Assussanni - unless you have a hankering for fantasy over sci-fi, or object to Star Wars, the gameplay in IA is more refined and improves on some of Descent’s rules. Might have trouble finding either at the moment though, as I think both are no longer in print.

IA is still in print. The core is usually not that hard to find, but the expansions seem to have short reprints, which sometimes sell out quick. Amazon currently has a few of the boxes expansions available, though.

And a pro tip: if you ever have to tell the players what they themselves are saying, you’ve already failed.

I do not 100% agree with this. In a full out RPG, sure, that would be a fail, but not everyone wants to make a character for a game, sometimes they just want to control one. To me, it seems part of the fun of Descent here is discovering the characters personalities as they go on their adventures. A mixture of game and story.

That said, I think it boils down to what @Benkyo said above: the game is boring (per Quinns, as I have not played it). While the heroes get abilities and items and some of the game mechanisms sound pretty cool, if just running up and doing a double attack is the best use of your time, the designers failed at making an engaging game, even if the characters and story are.

See, I’m not crazy about Gloomhaven.

But here’s the thing… my friends and I played Gloomhaven 50 times. Once a week, every week, for all of 2018. It was fun! We had fun. And I remember exactly 1 mission… it had some Black Oozes, and some pipes, and it was great. The other 49 times… they were fine. We enjoyed them, but I don’t remember them.

And don’t get me started on the rules. So many of the rules are either idiotic (the way the game wants you to deal with summoned allies is just stupid), fiddly (elements, I’m looking at you), or obtuse (light blue terrain is not the same as dark blue terrain is not the same as green terrain…). They’re bad rules. They’re functional, but so many of them are just… bad. Not unfixable, but at what point does the fact you have to “fix” the game start to impact the fact that maybe the design itself isn’t great?

Journeys in Middle-Earth? I remember 8 of the 12 missions. Imperial Assault? Every single mission (albeit only 5). And I suspect Descent is going to give me that same experience… curated, finely tuned experiences where exciting things happen and are memorable. And FFG-quality rules, which means 99% smooth-as-silk with 1% quickly-fixed-in-errata.

But for $200CAD, you can buy either Descent 3rd Edition, or Gloomhaven and Jaws of the Lion.

All that stated, I haven’t played D3 yet. I own it, I have marvelled at the beauty of the minis (staggeringly high quality, even by FFG standards… their minis are usually a 7/10, and these are flirting with a 9/10) and terrain, but I haven’t actually played it… but comparing NPI and SUSD’s reviews, I’m actually a little surprised that Quinns didn’t like it more…

I guess I’ll reserve judgement until I can actually play it, but honestly? I’m excited for it. Fingers crossed!

That’s interesting. I got the impression (having played neither) that Imperial Assault was much more story-driven and, as such, begged for going deep on the expansion content. I don’t think I’ve ever heard anyone mention Descent 2e expansion content and, as such, I assumed it was more of a standalone experience that didn’t demand additional content.

Yeah, if anything Quinns thought the exciting bits were all in the app.

I’ve watched a playthrough of the first mission, before the review hit, and I can safely say I have no interest in paying $160 for the gameplay on display. To the extent it’s interesting, and that’s not that much, it’s interesting like a CRPG. But I have loads of those, for much less, and they don’t take up space on my shelf or make me mess with dumb 3d terrain (apparently people are very excited by that part but for me it just looks like a colossal hassle and does even less for me than minis!). And most of them are set places more interesting than Terrinoth!

Or, for a lot of people, a mountain of great that you will probably struggle to finish, versus a smaller selection of move up and attack twice.

For me that’s an easy choice, and it wouldn’t be Descent.

I got the impression (having played neither) that Imperial Assault was much more story-driven and, as such, begged for going deep on the expansion content. I don’t think I’ve ever heard anyone mention Descent 2e expansion content and, as such, I assumed it was more of a standalone experience that didn’t demand additional content.

Nah, from a one vs many perspective they’re very similar, just Imperial Assault is better balanced (not balanced, better balanced) and corrects some of Descent 2e’s flaws. They both have a bunch of narrative and I think similar length campaigns, and the expansions add more stuff and more missions. You probably see more people talking about Imperial Assault’s expansions because it’s Star Wars and they add famous stuff from the franchise, whereas no one cares about Terrinoth except like one dude in management at Fantasy Flight.

Personally, I’m not sure how available it is, but if folks are looking for a richer pure coop fantasy crawler (as opposed to one vs many, where I surely have not encountered one better than Imperial Assault, but…in fairness, I don’t like one vs many much so I haven’t gone out of my way to try), my next recommendation after Gloomhaven would be Middara. We’re in I’d say the third major story chunk (not that deep in but many hours still) and every mission has been satisfying and had memorable twists, and there’s a lot of flexibility in character building and tactics during play. With the promise of much, much more as we get deeper into the campaign. Just…be comfortable with a lotta text or using the “Spark Notes” booklet to get the gist. And it being very anime/JRPG.

After that, I personally prefer Sword & Sorcery to Descent, and certainly to this incarnation of Descent, but I don’t think there’s nearly as much space between as there is between Descent and Gloomhaven or Middara.