Great review, particularly loved Quinns muppet but… can anybody let Matt know that Cheers was based in Boston, not Chicago???

What did they say about it? I’m quite enjoying my play on BGA

He liked it, but he has mainly been playing it in BGA, given the circumstances, and he understands that on a board, calculations could be a drag. I played live it about a month ago in one of my group sessions and really enjoyed it. Even with paper money. And no calculator.

I thought he did a good job of saying “this is why I love it, and these other things are why you might not love it”.

To add: since my tastes and Matt’s are quite divergent, this is a really useful thing for him to be doing.

(Meanwhile Walker of SVWAG absolutely hated it, even on BGA; sure, it does the calculations of how much money you get, but if you’re with players who want to work out how much they’re going to get if they do X or Y… episode 152.)

And yet I just listened to SVWAG’s episode on Imperial 2030 (I’m about a year behind on my SVWAG feed; the only one I’m current on is SUSD). Imperial 2030 gets glowing praise from both Walker and Mark with no real mention of the downfall involved in mathing out the bond payments.

I was disappointed because the review failed to communicate to me why you’d want to play CotBS instead of an 18XX game. (Not that I’ve played an 18XX game—mostly because I don’t have anyone to play it with.) But the only thing I heard Matt say to positively distinguish CotBS was that he liked the art… and that’s a fixable problem for 18XX… whereas, for instance, it doesn’t seem like CotBS will ever have spatiality.

Yeah, that was probably a big miss. But, to be fair, Matt doesn’t have a strong enough background with 18xx to really compare and contrast. Perhaps, then, Ava should have had a stronger part to play in the review, as they seem to have a robust background with 18xx.

There are a couple of things that I think differentiates CotBS from standard 18xx fare; namely the resource management/consumption and the market fulfillment. But, yes, it lacks the route building of an 18xx; additionally, it also seems to (I haven’t actually played CotBS yet, despite owning it longer than most people) struggle to make the stock buy/sell portion of the game interesting.

I would have liked Quinns to review CotBS to have the carry through from Food Chain Magnate and Arkwright. Though they’re different in their economic implementation, they appear to be quite similar in target audience and scratching the itch for mathy market economics within similar time frames. Especially considering Matt said this was his favourite toothy economic game, some more qualification of that statement would have been interesting. Not in a trolly ‘HOW DARE HE’ way, but the things he described in the review are found in other economic games, so similar to apc’s post, I don’t understand what this game does better.

Comparisons to 18XX felt a bit cheap, since it’s clear any economic boardgame will likely be more approachable than an 8 hour game of 18XX. That almost goes without saying! Though it did a great job of sneaking in an explanation for the thrill of economic games to a wider audience that probably hasn’t played one before.

Yep, Heavy Cardboard’s playthrough of CotBS with 4 players was about 4 hours.

I concur, the game I played with 4 players was 4hours long ish, including the teach.

Rewatching SUSD’s review of Arkwright:
“It’s like Jeff Bezos, but it’s in the past so it’s fine.” 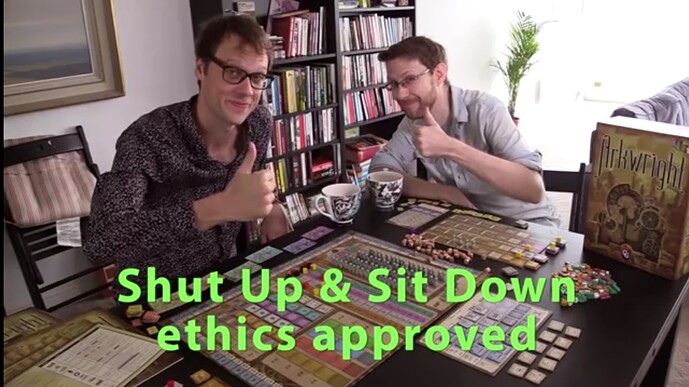 How times have changed!

I did read the whole manual for Carnegie… there was a footnote that the guy was not just a philanthropist. One tiny footnote on the last page.

One tiny footnote on the last page.

Last night, I figured out two things: podcasts help me fall asleep and Matt had quite a long rant on the history of Carnegie in the podcast they did on the game with which I quite agree (the rant, I haven’t played the game which they said was excellent). Just for those interested he seems to have gone to some length to research a bit more than I did (I just remembered what I learned in my US history class in 1993). Neither designer nor publisher is American and so maybe they didn’t quite realize how little they knew…

I remember playing this BEFORE I started playing 18xx and I probably would have to play it again now that I have a good experience with the genre. The game play is strictly a modern Euro game of worker placement and resource management. But the 1846-style stockholding system was pretty alien to me that I might have been playing the game suboptimally in this aspect of the game.

I remember not being pleased with it. The game suffered from yet another inexperienced designer who thinks “more is better”, and so you have so much faff that adds little return and led to obvious strategic plays. Like, your typical 1830-style game has less rules than this.

However, Im willing to give this another chance now that this is available in BGA