Oink Modern Art has arrived, so now I own two Reiner Knizia games. (The other being Ingenious.)

And because this post kicked off a thread derailment (arguably two), it’s now the top of a new thread about the best-represented designers in our collections, and other statistical information. 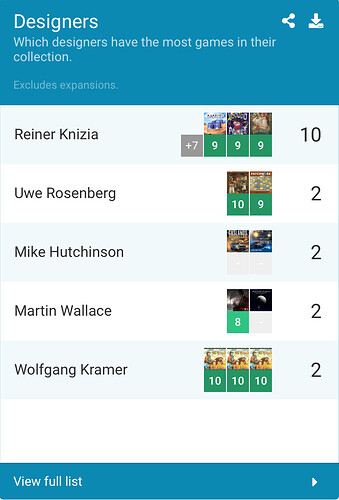 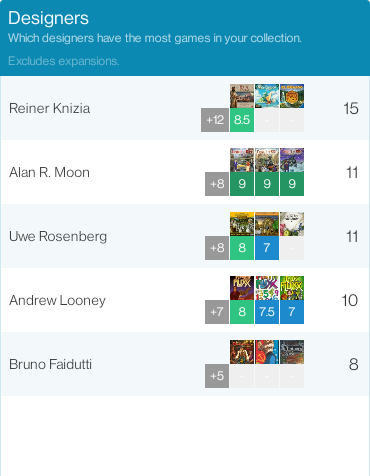 (Really surprised to see a Bruno in there)

http://geekgroup.app, it reads to BGG collection and can provide “insights”

FFS, Knizia is my highest too.

Then it’s a two way tie between Leacock and Lacerda.

EDIT: Forgot that I got Pandemic The Cure in a trade a few months ago. Leacock and Knizia are drawn first… all 7 Leacocks are Pandemic variants though.

all 7 Leacocks are Pandemic variants though.

And all squares are rectangles!

And all squares are rectangles!

No, all pandemics are in rectangle boxes. None of them are square. 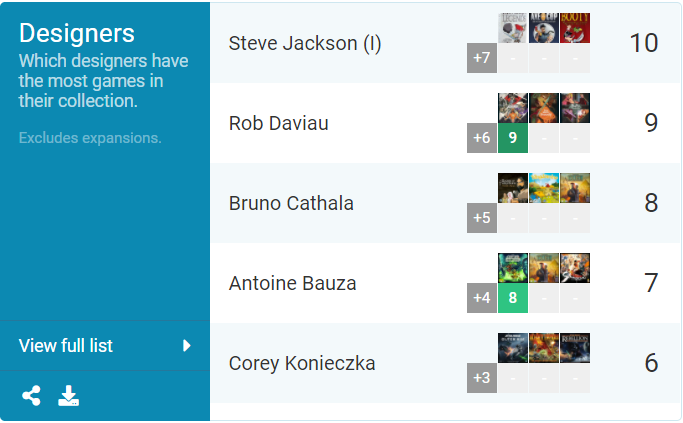 Gah, all those Munchkin sets gumming up the works.

My designers with 6 titles is actually a four way tie between Konieczka, Vlaada Chvatil, Justin D. Jacobson, and James Ernest. If we drop Steve Jackson, then Matt Leacock would be next. 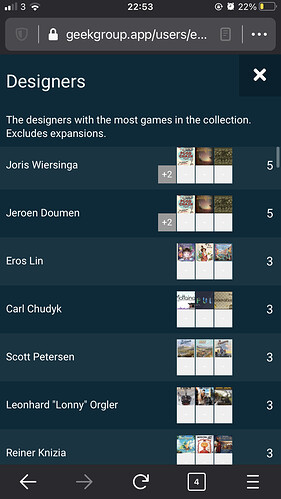 Knizia sneaks in here too… Although at least one of them is on my trade pile.

Isn’t that just a given since you have an FLGS’s worth of games?

That was a lot easier than the last time I did this: 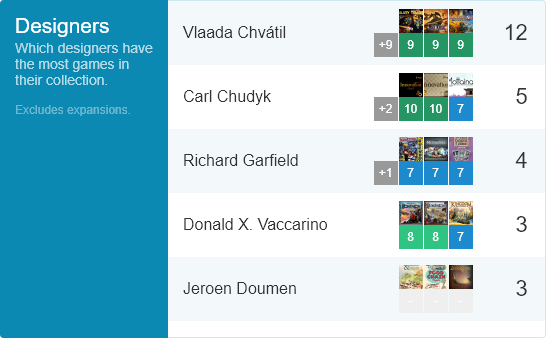 I feel like Donald stole his place by having 2 of the same game on there. Carl is doing the same thing - cheeky Carl.

Matt Leacock should technically be in shared 5th place with Jeroen and Joris (same games) instead of Donald.

Very much a rough estimate. Quite a scary number though! 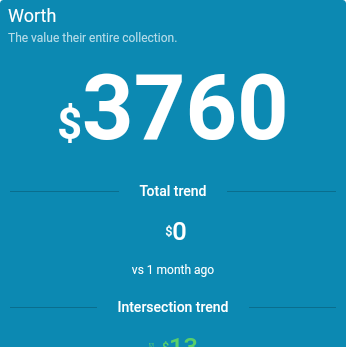 I got rid of entries where it was just multiples of the same game (Monikers, Exit, and SH:CD). And technically Eric Lang should be 3 instead of 4, as it’s counting two separate instances of Dice Masters.

Amused to see Daviau in there thanks to LOTR Monopoly.

Knizia and Rosenberg not shown as I only have 2 each of their games (High Society and Royal Visit / New York Zoo and Nova Luna).

In theory there’s another on the way. Unless Brexit’s caused 1840 to be banned for having an overly European name 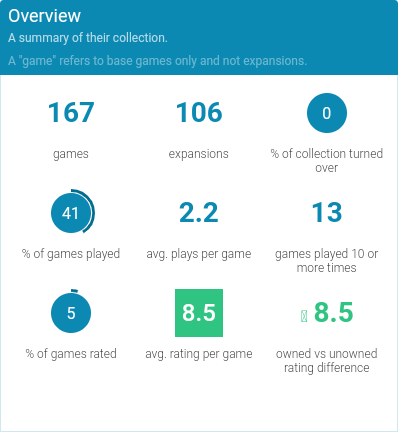 Though to be fair, it’s not 100% accurate. I have played many games of Axis & Allies, Fortress America, and most of the Munchkin sets, plus probably some plays of other games that I have owned for a long time, just before I bothered to track such things.

With all those designer lists, when I look at mine (geekgroup is awesome, been using it for a while), I really wish that BGG had franchise as a data field to group multiple instances of basically the same game together. No I do not want all 3 of the Zombicide designers topping my lists because I own 4 different standalone games that have the same gameplay (or even slightly modified replacement). It would also solve the Top 100 issues if you would only allow one game to represent a given Franchise.

All the different Pandemics are a bit more difficult but even so I would rather have them grouped together. Also one could offer a game and franchise view of the Top 100 so people can decide what they prefer.

There must be something wrong with my idea because it is not so farfetched and they kind of already do the Family of games… but that is too broad I think.

The designers at the top top of my list are Knizia with 10 and Rosenberg with 7. my average Rosenberg rating is higher though 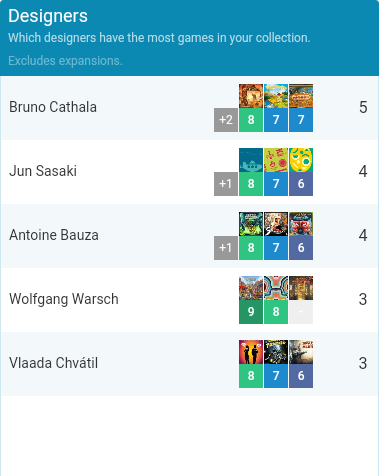