Alas, BGG doesn’t let me filter my collection by publication year, but I can go to Profile → Stats → Games Owned By Year. Of those I own with a publication date in the 1990s, I still rate:

(I may have missed some like El Grande because I have a reimplementation included in my collection, rather than the original; e.g. El Grande Big Box)

High Society (1995) I expect this will require the right group

No, it is great with every* group!

I also have two crayon rail games, Nippon Rails and Iron Dragon. After that, Bohnanza (still amazing), Guillotine (not bad quick filler), and Quiddler (kind of like Scrabble + gin rummy, not bad but very much a “parents” game). It looks like the majority of my games are from 2015. A fine year!

There are older games I will also play but these are 90s as far as I am aware. I will no longer play any form of Catan. Shows the staying power of the doctor‘s designs 4 of 9 are his and I am not even a huge fan.

There are some I haven’t played I would be curious to try… like Roads and Boats, Chinatown, Modern Art… and I own High Society but haven’t played yet.

That I’ve played: (mostly just once)

From the '90s I have 6 nimmt!, Condottiere, and Through the Desert, all of which I like. Camel Go is the best though

Rapidough is a favourite “party” game with my non-gamer friends, as is (and was in the past) Outburst. Having followed a few links above, I’m tempted by Cranium too.

The 90’s was my college years, and also the era of Cheapass games and Star Fleet Battles for me and my friends at the time.

Star Fleet Battles (1990) - Long, convoluted game with rulesets that read like legal documents, but coined one of my favorite rules regarding a weapon called a Mauler, noting that “it cannot be swung around the board, à la lightsabre.” Good simulation game of starship combat in the Star Trek universe (though the whole fighting at warp speed aspect seemed silly).

Nuclear Proliferation (1992) - Standalone expansion to Nuclear War (1965) which added a lot of new features. This is a game I originally played in high school and it was silly fun, so I picked it up myself later. Didn’t really hold up and now it just sits around.

Once Upon A Time (1993) - My wife saw it in a small game store we stopped by one day and bought it to support a small business. We’ve never played it.

Blood Bowl 3rd edition (1994) - Saw part of a tournament of this being played at a game store in college and was instantly hooked on the idea. Picked it up when I could and introduced it to my high school friends over the summer break and played our own tournament. Was a lot of fun.

Settlers of Catan (1995) - A game that seemed to be in everyone’s collection for a time. Still have it, but haven’t played it in years.

Condottiere (1995) - Only got this two Christmases ago and it has yet to hit the table. Wanted it ever since seeing SU&SD’s rules explanation video.

Mystery of the Abbey (1995) - One of the first “modern boardgames” I purchased after a random stop at a billards and darts store sometime in the 2000’s. Choice was between this and Shadows Over Camelot (which I got later). Kind of a Clue variant, where you need to find the murderer from a list of monks who each have different characteristics. What I like is that to get information, you can ask almost any question you want from the other players you encounter, but if they answer, they get to ask a question in return, and with it all being public, the other players can overhear and get info as well. Also that you can make declarations about a characteristic the murderer has and at the end of the game, you get points for being correct about the characteristic, meaning the player who actually accused the correct suspect may still lose the game if someone else correctly stated enough characteristics. Still love the game, just does not get played much.

Kill Doctor Lucky (1996) - One of (if not the) first Cheapass game. A reverse Clue, where the players are trying to kill Doctor Lucky while not being observed by the other players. Not bad, but can drag on too long.

Lord of the Fries (1998) - Another Cheapass game, trying to get rid of all the cards in your hand. Has a good humor to it. Kind of a more complex Uno. Fun enough.

Chinatown (1999) - Another one that I got interested in due to SU&SD, this time with their Let’s Play. Picked it up sometime last year, but it has yet to hit the table.

El Grande is not listed on BGG for me for the same reason as @pillbox mentioned. I have played it once. It is great. I hope to play it more soon.

Lord of the Fries (1998) - Another Cheapass game, trying to get rid of all the cards in your hand. Has a good humor to it. Kind of a more complex Uno. Fun enough.

I’ve played it. I’ve demoed it. I still have a copy. Kind of fun, but there are now many other games I’d choose first.

Some games that haven’t been mentioned, all at the lighter end, and all at least as good as For Sale and 6-Nimmt if you ask me:

Pitchcar has aged very well. I hadn’t realised it was so old. Ten second rule explanation.

Loopin’ Louie is probably even better than Pitchcar. Five second rule explanation. It’s hard to think of a game that is more immediately engaging.

Jungle Speed is great, though there will be injuries. Prepare to be beaten badly by teenagers (if like me it’s been a while since you were one of those).

Lifeboats packs the fun* of Diplomacy into an hour and a half.

The games I’d like to try are Paths of Glory, Hannibal: Rome vs. Carthage, and The Republic of Rome, all of which sound amazing but probably need a bit too much time investment to be realistic.

* For some definitions of ‘fun’. The people I’ve played it with enjoy this sort of thing.

In a surprise to no one, my favorite ‘90s game is…SUPREMACY!!! 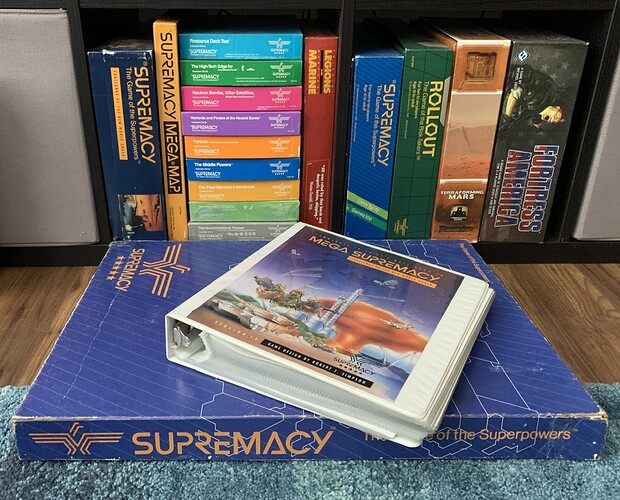 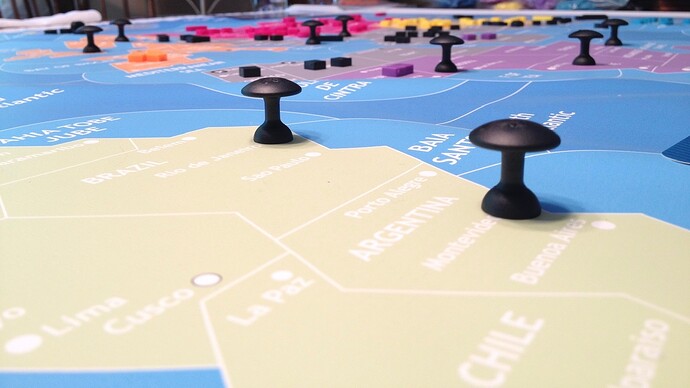 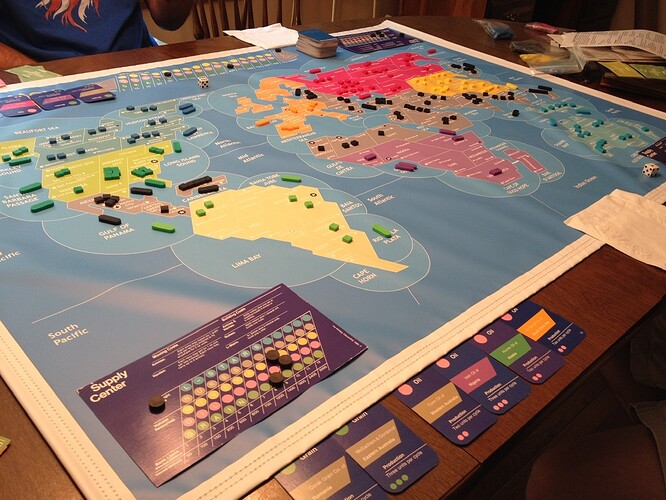 But… BGG says that was released in 1984! Maybe it still counts in spirit.

Originally, yes. But they were still in business in 1990, when I first bought it, so I’m going with that.

(Plus the definitive version, MEGA SUPREMACY was released in 1991. NB: The large flat box is a 1st edition from '84. The 2nd edition is next to Rollout, and the 3rd edition is on the far left.)

Actually, now that I think about it, I’m not sure if I own Lord of the Fries. I was thinking of Give Me the Brain, which was released in '96. I might have both, I’m not certain, and most of my Cheapass games are packaged up somewhere in my garage.

Loopin’ Louie is probably even better than Pitchcar. Five second rule explanation. It’s hard to think of a game that is more immediately engaging

and now I notice that is one of the games I never rated on BGG… best played as a drinking game.

Some of these don’t need introduction. My faves are:

I swear Rosenberg’s games are great before he made Agricola

My embarrassingly long list of Knizia games from the 90s

And nobody is surprised

Once Upon a Time (1993) - I really like it, but it’s fallen flat with some groups. Not a good idea to mix in all the expansions at once.

I used to have that and maybe still ahve it somewhere, I couldn’t find it when purging my small game drawer recently but I never managed to get a single play out ot the copy. Everytime I explained the game, people ran for something else.

My partner really likes Once Upon a Time, but it doesn’t hold up as a game; if everyone is into the collaborative storytelling, then it can be really fun.

But if anyone in the group is in the least bit competitive about it, it’ll fall apart because they’ll push the rules and then everyone else will be forced to either enforce the rules (and seem like jerks) or let it slide, and let the competitive player push the story around more than they should.

The game, that aged the best for me is El Grande, I still think it’s one of the best games ever made and I really enjoy playing it.

Games that would depend on the group, mood, or whatever
Torres
Chez Geek
Don Pepe
Magic: The Gathering

A special shoutout to Anno Domini the German version of Timeline which is a nice take on quiz games.