Against my better judgement

Ok so… I started a new job nearly 2 years ago and after a month have been working from home for the most part. As part of remote working and the rare night out I’ve became pretty good friends with some of my work colleagues.

During the worst of the pandemic I would arrange online games (jackbox) and virtual plays of party games (codenames, wavelength). It’s became a recurring joke to tease me for loving rules and fun. Which I’m cool with. You can’t have fun without rules.

So we arranged to have some of these work friends over this coming Friday. Now I know it is easier to find friends who play games already than those who don’t. But I’m looking for suggestions for 5-6 player games.

I’m thinking, so clover or wavelength (the in person play adds something). Or going a bit more board gamey with lords of Vegas, cosmic encounter or inis if we are only 5.

Any suggestions, or advice. My partner will be joining in who has become a pretty well seasoned gamer through knowing me and also completely unbluffable for me (otherwise I’d suggest skull).

Just One has worked wonders for me at that count. And Werewords, although it might be better at 7 or 8, but 6 is still nice

All of these are pretty simple except maybe maybe Viticulture.

Ca$h ‘n Guns, Sushi Go (Party) and Articulate are all games that we’ve had fun with over the years that are very much at the lighter end of the spectrum.

Ooh, I like the suggestion of Dixit (or alternatively Mysterium) as well.

The Resistance maybe? (No modules, just plain spies and rebels.)

Seconded on Mysterium and Concept.

I would third Dixit - it’s just very different but also one round makes it completely understandable.

Also Decrypto, and Camel Up works for larger numbers as well (at least the second edition I have)

I’d recommend Between Two Castles of Mad King Ludwig, Celestia, Mysterium and A Fake Artist Goes to New York, while also giving another vote to Dixit and Sushi Go

At a previous job I ran a games night and it was almost exclusively for non gamers.

Celestia was a big hit. The cardboard boat is a snazzy centre piece, the rules are easy enough and crucially the betrayal isn’t very personal.

Sushi Go Party was a hit with those mildly more inclined to do rules. It’s still not heavy but there is progression adding in varied cards from the party set.

6 Nimmt! has a huge advantage of being incredibly easy to teach. I also love this game but don’t underestimate the fast teach.

Codenames was my staple for trad non gamers.

If these people have done online games and enjoyed I’d suggest starting with 6 Nimmt! For the demonstration teach and it’s speed so your guests can have an at table success under their belt quickly to build confidence and relax them in to the night. After that use some judgement. See what they say in response to the game, use your previous experiences with these people and go with what seems apt. 6 Nimmt! is also quite different to your mentioned party games in some ways. It could be a weather vane for wether to go to a party game ala Codenames/Wavelength or would they appreciate something more hobby game feeling.

Hopefully at the least anything I’ve said you disagree with might point you in the right direction.

This is a good point I may start with 6nimmmt as a solid all rounder and see / let them have some control over where we go from there (it means a bit more prep for me but that’s fine.

I was thinking of this recent Cole wehrle tweet and I think I agree with it and some of the awesome suggestions thanks. 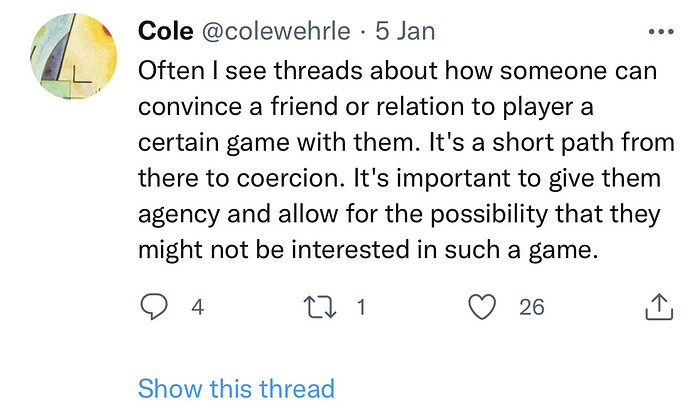 Some lightweight contenders for these player counts:

Some of those come with caveats, but if you have the games then you’ll know what those are.

If you think the group would be into the theme and unfazed by the potential for imbalance, then I’d definitely consider Betrayal at House on the Hill.

Similarly, Escape from the Aliens in Outer Space if you think people would be into it.

Pictomania I’d play up to 5 – I’ve found that it’s really hard to fit 6 people with a good view of the cards.

At 5 players I’d also be thinking about Carcassonne and China.

These are all the games I’ve played at work game nights: 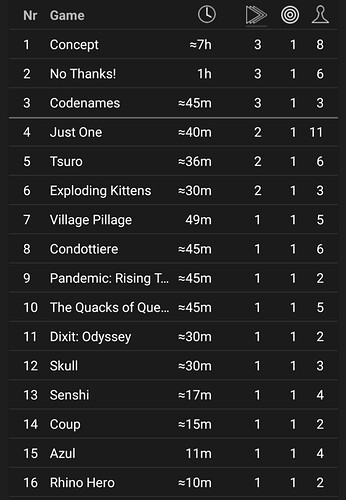 I probably wouldn’t go with Pandemic or Quacks, but the others would probably be fine.

I’ve Startups to be a great bigger group non gamer game. Simple enough to explain, just a touch competitive, and easy enough that you can still chat over the game.

For larger groups (5+), social deduction games and party games usually work best — their game length doesn’t increase as much with large numbers. In particular, Murder in Hong Kong works great; reserve the Forensic Scientist role for you for the first game, and impose the rule that the murderer in the last game is the Forensic Scientist for the next. Other good options: Mysterium, Resistance (or Resistance: Avalon), Wavelength, Monikers, and Codenames: Pictures (or just plain Codenames).

More boardgamey options that work well up to 6 include: Libertalia (could be tough to find), Cubitos, Sushi Go! Party, 7 Wonders, and Betrayal at House on the Hill (or Betrayal at Baldur’s Gate).

Tip: If you can hook up a browser to your TV screen, see if there’s a Rodney Smith Watch It Played video for the game you’re playing. He’s great.

Thank you all for the suggestions it helped me massively in considering what to play and in what sequence. The hit of the night ended up being monsdrawsity. The only bad choice on my part was going back to 6Nimmt after some of the group were significantly drunk, the maths voodoo was getting a bit dense and less fun.

Following the advice here, I didn’t push anything heavier on people and let them choose what they wanted to play. And that limited amount of agency seemed to work.