Welcome to Shadowbrook - and our first game of Flying Frog Productions A Touch Of Evil!

Tis’ the dawn of the 19th century; an age of science, superstition, and witchcraft. Howling fills the night as a full moon rises over the small, secluded village of Shadowbrook. Gruesome murders have become a daily occurrence and terror haunts the streets at night. An evil creature has taken up residence here and the countryside is engulfed by a tide of darkness. But all is not lost…not yet.

Our cast of heroes are:

The villain of our story is the Spectral Horseman, roaming the land with his Barghest Hound and Ghost Soldier minions!

We will go through specific rules as play continues but to read an essential rules summary, click below, or visit the game rulebook on the Flying Frog Productions website here. 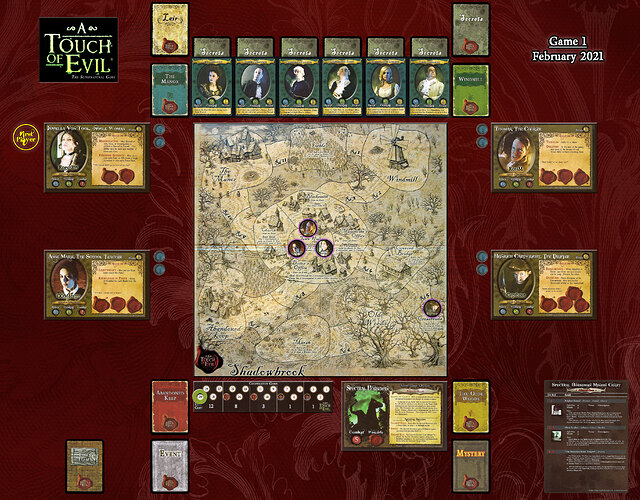 Before play starts, Henrich can look at one Secrets card, and chooses the one for Reverend Harding. It reveals the following:

Little Secrets: A Second Life. With a penchant for week-long excursions to the bustling city nearby, this Town Elder does not speak of what dark treasures their ill-gotten wealth can provide. Or what dark influences they have brought back with them. This has No Effect to their attributes.

The First Player this round is Isabella Von Took - who rolls for her movement …
d6: 2

So, @RogerBW, Isabella can move up to 2 spaces - or you can linger at the Town Hall in the centre of the Board. Where do you want to go?

(I forgot to add that you all start the game with 2 Investigation points already.

Can I check. This is a co op right?

Yes - fully cooperative. (And I forgot to ramp up the Horseman’s wounds too so will correct that for Round 2.)

@RossM I think we should try to avoid killing each other!!

As far as I can see, everything costs Investigation, and I get Investigation by, er, investigating. But I’ll move one north to the Blacksmith/Store space. If I understand correctly, there are no enemies so I don’t fight them, but I draw an Event and may then purchase Town Items. (I have a particular reason for wanting disposable Items.)

But then where’s the challenge?

Isabella walks/rides to the Blacksmiths - and yes there are no face up enemies to confront, so on to her actions.

You must encounter the space - in this case, draw an event card - and this turn you can’t do anything else before it as you don’t have the Investigation to look at a Secrets card or buy a lair card yet.

Who do you want to play that card on?

The only other action you could do is buy something from the Blacksmith, so here is the list of available Town Items. Let me know if you want to buy something. The Investigation cost for each item is the yellow number in the top right of each card. 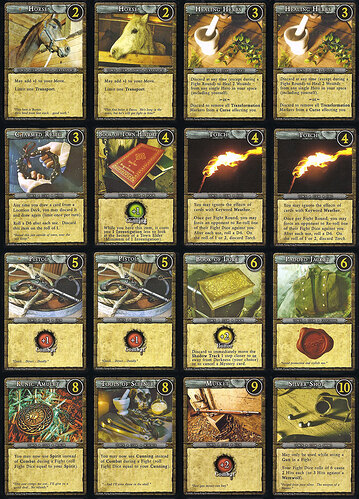 Olde Woods and Abandoned Keep are both to the south, while I’m to the north - anyone else want it?

No purchase for now.

@gmwhite999 asked for a die roll:
Up to you guys on the mandate card. Although it is play immediately, at this early stage in the game it can probably wait until the end of this turn if Isabella doesn’t decide.

Remember that a roll of 1 will gain you an Event Card at the start of your turn.

@gmwhite999 asked for a die roll:
Bugger, let’s try one of those again.

Barring something else coming up, Anne Marie intends to move to the Manor on her turn and Encounter the Space. In the interest of keeping things moving.

OK, to keep things moving I will randomly give the Magistrate’s Mandate to Heinrich.

Seems reasonable as he’s the nearest one to those spots before moving.

Thomas (@RossM) to go then, with a whopping 7 spaces of movement - which can basically get you anywhere on the board for your first move, unless you wish to linger.

Do we have any thoughts of a plan? Interact with as many locations as possible?

I think I should go to the Olde Woods as I can hold an extra card from there now.

Is there any disadvantage to being in separate locations?

Planning is not as key in this game as in say Fury of Dracula, but once you all collect a few items you might find the need to swap some between you to the best collective advantage. Plus even if two of you are at opposite corners of the board you can meet up within a round or two of deciding too.

@RossM mate - you’re up next. Where do you want to move to?

As far as I can see from the rules, there’s no way for more than one hero to participate in a fight except for the Showdown at the end (because this is originally a semi-coop game). Therefore I don’t think there’s much virtue in sticking together.