I didn’t believe this at first and had to check to make sure it wasn’t 1 April.

I honestly don’t see how this is good, but it may not be bad.

I think, more than anything, PAI has a reason to divest themselves of Asmodee and that scares me a bit.

They’re the second PE fund to own it, aren’t they? I think there’s been a lot of speculation that the underperforming elements were being stripped out prior to a sale…

Yeah, second PE, but it’s grown a lot (a.k.a. acquired a lot) in the last 3 years when PAI bought it.

Honestly, best case scenario for the hobby is that someone buys it and spins out all of the different properties.

I’m guessing PAI is bailing because the cost of Chinese manufacturing has skyrocketed and it’s just too much to worry about for a company that was, likely, one of their lower profit margin producers to begin with but now face even higher logistics challenges/costs.

Which means any buyer willing to shell out the money to pick it up will certainly do the leg work and determine the same thing – meaning any potential buyer will, I assume, only be interested in it if they can part it out and spin out different properties for profit and then cut their losses on the rest in a bit of a gambit.

I think this is not good news.
Sure, nobody in the hobby really likes Asmodee and their business practice. But being sold is bad news IMO.

There is no telling how a sale of Asmodee might affect the board game industry. They own so many publishers and even distribute games themselves. Fantasy Flight, Z-Man, Gamegenic, Days of Wonder, Catan, Repos Prod, Lookout, and others are all under the umbrella of Asmodee Games.
(Asmodee Owners Looking to Sell Company for 2 Billion Euros | Board Game Quest)

If they already had a buyer lined up, it would be a different kind of bad news. But this feels like Asmodee is going to get taken apart for the scraps of meat. And it is going to cost all the smaller properties that aren’t Azul or Ticket to Ride.

And also what is going to happen to places like BGA? There is no way BGA is really profitable…

It’s a bit worrying with all the other challenges facing the hobby at the moment.

I can see it creating a bit of a similar scenario to when the AA video game companies went bust or were stripped for IP a few years ago.

This, from a few years back: 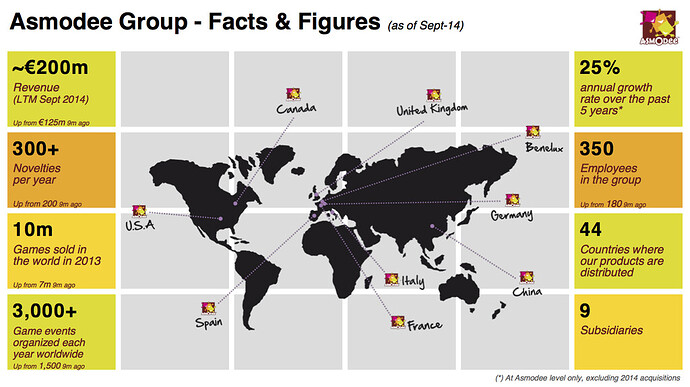 Quinns: OK. Wow. Who wants to play a game of real-life Monopoly! None of you? Well, you’re out of luck. Put on this top hat and climb into my weird, narrow car. News emerged last week that Asmodee, the largest conglomerate of designer board...

On the negative side, it’s a worrying overview of how many companies are under the Asmodee brand.

On the positive side, the comments section includes some awfully familiar names playing Paranoia : )

Yeah, but I think some people don’t have the same nicknames there and here and so I have to wildly guess (I only arrived here shortly before the move to tekeli.li, I have since tried to make up for my failure to find everyone earlier by posting a lot of words–which may or may not make sense at times)

Asmodee hasn’t been a “simple” publisher for a long long time. In the meantime they have also acquired more parts of the distirbution chain in France…

I absolutely think that this is a bad sign for the hobby. PAI is choosing to divest itself of the biggest and, likely, most profitable boardgame publisher/distributor in the world. What that tells me is that the boardgaming industry is about to go through some hard times and PAI isn’t emotionally invested in the hobby and is dropping Asmodee before it becomes a burden.

The potential good that I see is that, perhaps, Asmodee’s new owners may take a different approach to hobby market monopolies than PAI did and, perhaps, try to part out Asmodee, creating more, smaller companies, like how Plaid Hat spun out on its own again after being under Asmodee.

Absolutely, as I said a few times here transport around the world is going to remain an issue likely beyond the pandemic. Also printing everything in China has other issues beyond transport.

I think there is a ton of money to be made in boardgames. But change is coming and change is costly and difficult to handle and apparently these big money people are only interested in extracting money.

Somebody’s going to take a loss, and probably this will mean some publishers shut down.

Sadly, that is what I think as well. Some niche games that some of us like are going to go out of print. The best of these sometimes come back sure with other publishers. But some don’t and maybe it hits a whole publisher and a style of games we enjoy and no new ones of the kind will be made. And of course people will be out of jobs, people probably directly responsible for some of the stuff we like about games. -.-