re: Condottiere. Not here. It’s on backorder at my usual haunts… if it becomes available I might jump. But if it goes like Sheriff of Nottingham they’ll have few copies and I will have to decide within a day or two and that is not my forte…

Atm the game I most want from my wishlist and that is definitely out of print and no signs of coming back is Quantum .

Darn. I sold my copy to someone else at Essen last year.

Nothing wrong with it, specifically, but there were always other games on my shelf I wanted to play more. There’s a not-bad TTS version.

Never played Root, never used Vassal, but I would be more than willing to work my way into it, if there is a seat available and you would have me.

I’ve also never used VASSAL nor played Root, but if there timing can work, I’d love to join in.

Root is on my wishlist, along with all the expansions. I just don’t have a group to really explore it with.
War of the Ring is my 2 player dream game, but the friend I would play it with currently lives across an ocean. Again, it would be great to grab all the extra content and really go for a deep dive.
I have bought A Game of Thrones so if we do end up exploring all it has to offer then I’ll consider really splashing out on either of those 2.

The one game I want but can’t buy is Broadsides and Boarding Parties, the only one of the old MB Gamemasters series that I still don’t have. It only had one printing because it wasn’t very good, but ironically that only makes it more expensive.

Dune, Battlestar Galactica, Game of Thrones, and Blood on the Clocktower are all games I’ve resisted buying because I know I’d never play them.

Games I have but can’t play include Twilight Imperium 2, Heart of Crown, and Lowlands.

I also have something of a psychotic desire to play Imperium (Conflict games Edition), and Stocks and Bonds, because they’re so old an so ugly, I feel like they’re daring me to do something with them and survive.

Why can’t you play Lowlands? It seems like a stark contrast to TI2! Unless I’m thinking of a different Lowlands, that is.

Im the only guy who brings ugly beige games on our gaming group. And I have a solid reputation to any regulars and newcomers. Due to this, they dont need convincing to play.

[picture, if you will, a window that allows a viewer to peer inside pillbox’s head… here’s what you might see… in the Twilight Zone]

Attendee 1: “Hey, lalunaverde, let’s play some drab, beige games!”
Attendee 2: “Cor yeah! Ever since the last time we converted purple cubes into green cubes, I’ve been aching to play another game with a grumpy dude on the cover”

[raucous applause erupts from all those in attendance that night; by the time the night was over, no green cubes had gone unconverted to purple, blue or red cubes]

There, fixed that for you.

More of a Dinosaur Island crowd?

Sometimes to their detriment, yes. I will also admit that bright colors entice me… but when I see a beige game that is well respected, I at least know it’s well respected for its gameplay and not its art design. And, at the end of the day, gameplay trumps art for me, unequivocally.

(Puts game on the table and sets it up)

You’re obviously pitching it wrong! I introduced it to a friend of mine and she was absolutely thrilled at an opportunity to earn dike points!

[pillbox scribbles on notepad]
“friends… not… gay… enough…” Cool, got it!

My current wishlist is to play anything with my regular gaming friends and feel like I’m actually playing with them. So I’m trying to figure out the very basics of a streaming setup on my end for an external webcam to view the table and the internal webcam in my laptop showing me. It’s gotta work for roll and writes that I own with friends having printout boards on their ends if nothing else. 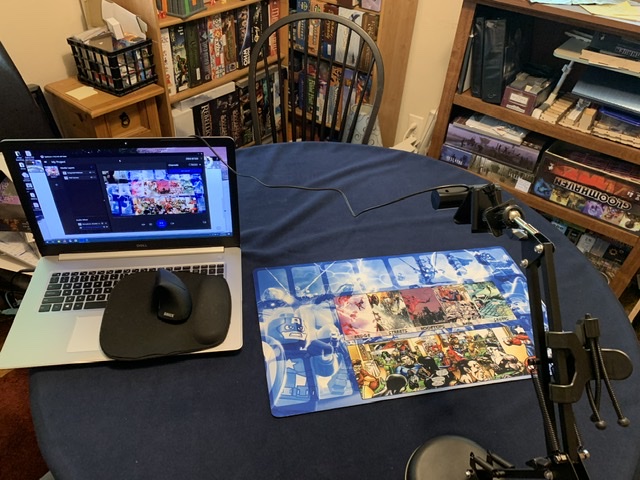 Beyond the immediate, I’ve had Revolution sitting on my shelf unplayed for a couple years now. Since there are many games by that or similar names, this one is the revolt of the Dutch against the Spanish, a topic which forms part of the necessary background to the main focus of my PhD dissertation so I discuss it in the first chapter. Playing the game for the first time was going to be part of my finishing celebrations, but life kept getting too complicated. Especially since you apparently really need the full 5 player count to truly enjoy the game and “Turn 0,” just setting up, with all new players can take a couple hours on its own. Definitely an all day affair.

Yeah, it is the most plausible item on the list, but while the theme would put off my friends, the number of rules would put off my family (or more technically put off me, because I’m not super interested in explaining every building 15 times over.) It just lacks any advantage over other games.