What do your BGG ratings mean to you?

I sort of follow the BGG ratings indications, and I only have three 10s on my list of ratings (Everdell, Gloomhaven, Spirit Island).

The majority of my ratings are 6-8, and based on how likely I am to want to play them. I definetily have no 1-2 games, because I haven’t found games that awful yet.

I recently changed a score, when doing the favourite game of the year list, but I tend to review them very little. Mainly after logging a game, or making a list.

I don’t think I ever commented on a game. Too time consuming, I rather vent here

I not only use BGG and basically using their rating scale but I also keep sorting and going through and rerating, I have also added comments to most of my owned games that I have rated. Not long, often not even a mini review but maybe enough so someone looking at it in Geekbuddy analysis can see why I like the game. I hope at least that is what my comments convey. I have previously used comments from users to determine whether to buy games before I ever started watching youTube game reviews the comments were a helpful guide. Geek Buddy analysis only makes them more valuable.

There is selection bias. At Spiel I may play games that I just don‘t enjoy much. I have a few games rated low but those are not marked as „Owned“. I rate unowned games as much as I rate games I have on my shelf. I use BGG to track more than just ratings though, by now I track how much I payed for a game and when I got it.

Like several of you I also use my ratings to extract games from the collection to sell them.

I have rated games lower than 6 but something needs to be really unfun, badly designed, unbalanced or otherwise actively make me angry to do that to a game. Of course „things that aren‘t games“ end up down here.

I use the more differentiated scale at the upper end to be able to sort games as well. If I find that something stands out from the games I rated 8… and I want to play it more… it may go to 8.5 if that makes any sense. (If not look at what some reviewers f.e. Radho do with their ratings—when they rate at all)

Btw: anything I rated below a 6 I will not play.

Most games seem to be 6.x so anything with an 8 is worth paying attention to.

but I also keep sorting and going through and rerating

Oh, man. I should do that, but it would take a week…

Thats what company time is for! Writing comments in bgg

My collection tends to be dominated almost exclusively by 7+ games (anything 6.9 or lower I cull… ain’t nobody got time for that).

My lowest rated games are “Killer Bunnies” at a 1.5, “Nature Fluxx” at 2, and “Risk” at a 3. I do revisit my rankings periodically (once every few years), modify my collection and glance over the old ratings to see if anything radically changed.

I only rate games that I own(ed), so they tend to only be 7-9. Anything lower than that I’ll have probably gotten rid of. But I do like the ability to hate-rank things, like putting down chess as a 1 because it literally does “defy my description of a game”

And 10 is reserved for actual perfect games, which apparently is just Chinatown? Or I thought so at some point…

The other thing I track is anime, but because I rank everything I watch, it gets a lot more use out of the lower numbers. If I ranked every game I played, I suppose it would be a much broader spread. 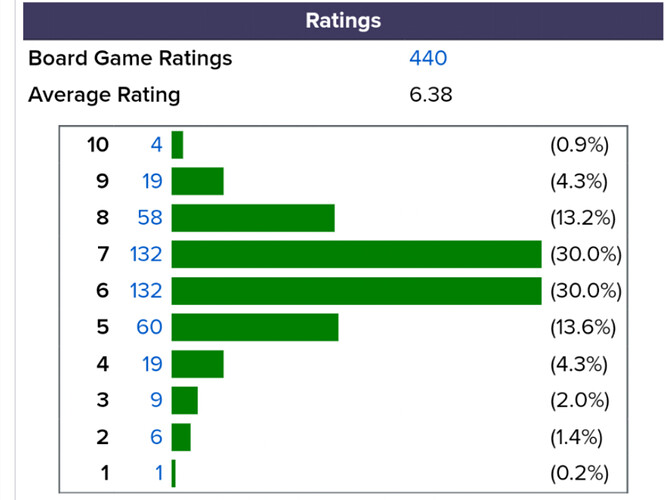 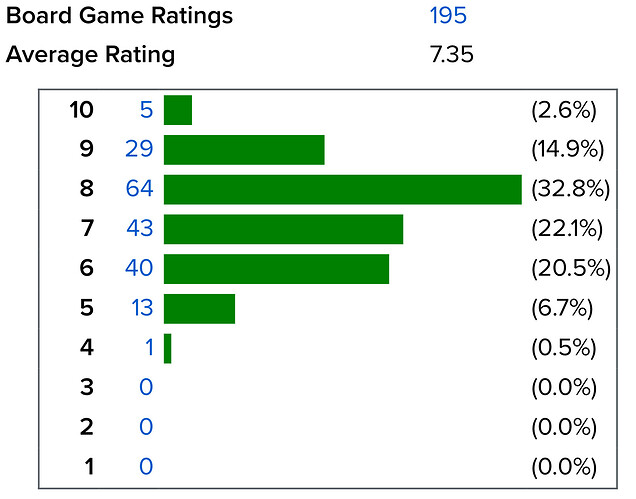 Mine swings toward the upper end - 9’s and 10’s are my favourites, 8’s and 8.5’s are great games I absolutely want to own. 7.5’s are games I might own but are less attached to and sometimes sell on for space. 7’s are only keep if there’s extenuating circumstances. 6-6.5 is games I’ll play but wouldn’t normally own. Below that are varying levels of dislike 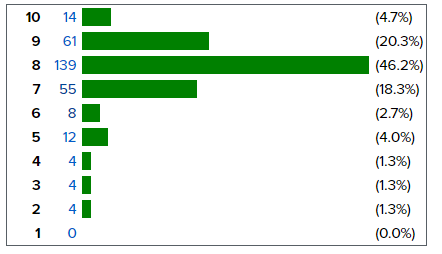 I try to be even-handed and I’ve played a lot of games I haven’t got on with (I evaluated them wrongly, or I was with friends who wanted to play anyway, or they were fine for a one-off but I’d be happy never to play them again). 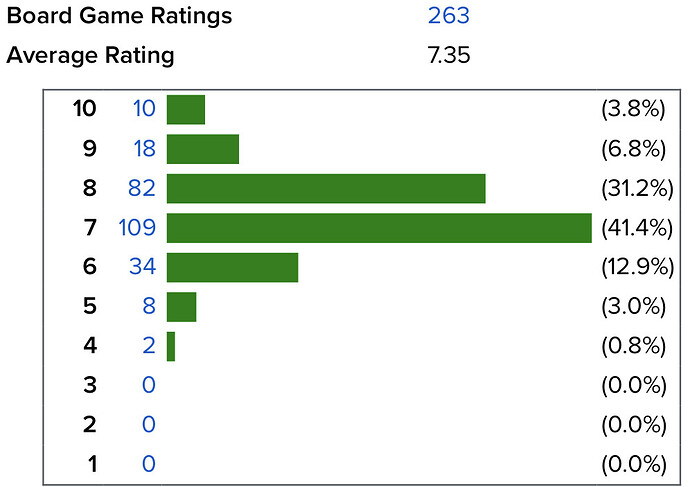 I think it’s somewhat off. I only have 6 games rated a 10 for example. The other 4 are expansions for those games that I’ve also rated. BGG will apparently give a chart for rated expansions alone but not for games excluding expansions?

Definitely some selection bias at work: 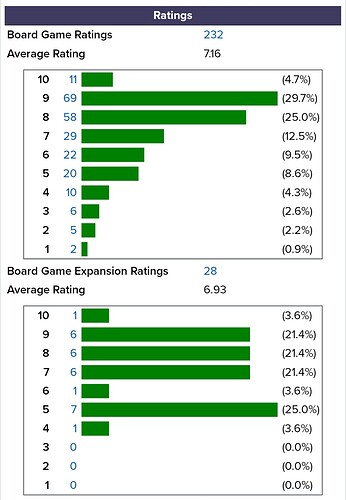 My ratings are dumped in at precisely the moment I’m inspired to do so, usually immediately after a session (sometimes, but not typically after a first play), and generally skew high. I don’t play many stinkers and when I’m not impressed with a design, I’m not usually inspired to rate (or keep) them.

That said, I’m 100% certain my numerical ratings would be valueless to anyone, even me. Sometimes I write my thoughts in the comments. Most of the time they can be trusted, but so very many of them are old and surely out of sync with my current sentiments. 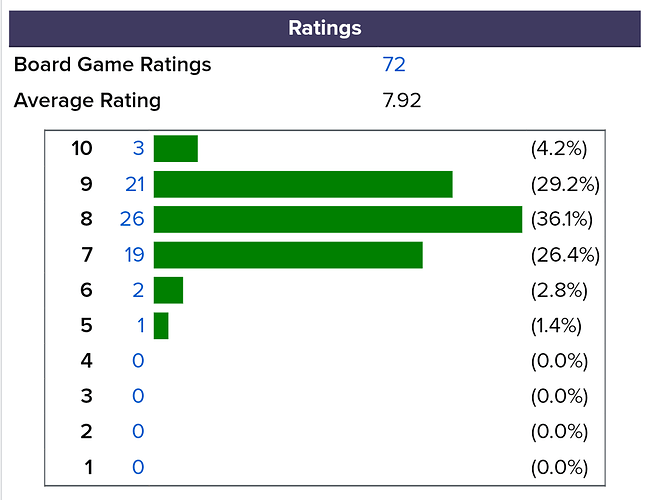 Apparently includes 12 expansion ratings. Note the only “true” 10 granted is for Rhino Hero. 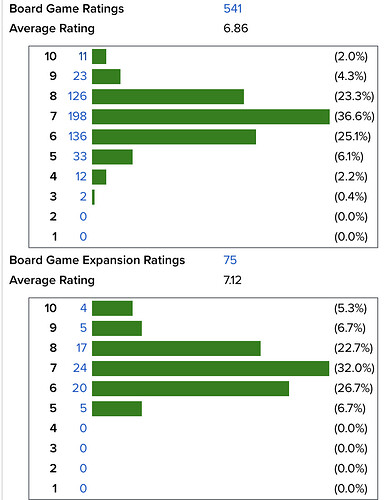 Sadly, no graph not even really at geekgroup.app (there is one there but it is not really helpful) gives me the ratings filtered without the expansions. I have rated some expansions but not consistently and I tend to rate them the similar or even higher than the main game. So the top graphs is skewed a bit higher than it would otherwise as I do not buy expansions for bad games.

I do not have 11 games rated 10. Just 3 and a couple 9.5s that get rounded up (as previously mentioned: Spirit Island, Terra Mystica, Gloomhaven, Beyond the Sun, The Crew and Codenames)

Many of my lower rated games were played at SPIEL or friends forced me to play Set or Jungle Speed (I should really rate those two lower, I really dislike them).

For me 7 is the „this game is fine“ rating. Just like „this movie is fine“ … if we wanted a Gauss Glocke we would have to have this rating at 5.5 but no rating system on the internet works that way. One reason being our inherent selection biases and us choosing to spend our time preferably with media that are „above average“ (aka 7). 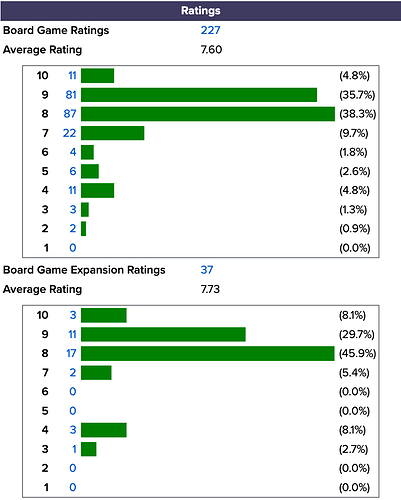 What is “confirmation bias”?

“These games I bought are obviously good. I wouldn’t buy a bad game. None of these are less than 7.”

Same idea why some people will get upset if a review naysays a game they own. They wanted the review to confirm their purchase.

So, confirmation bias. At least, that is how I understand it. 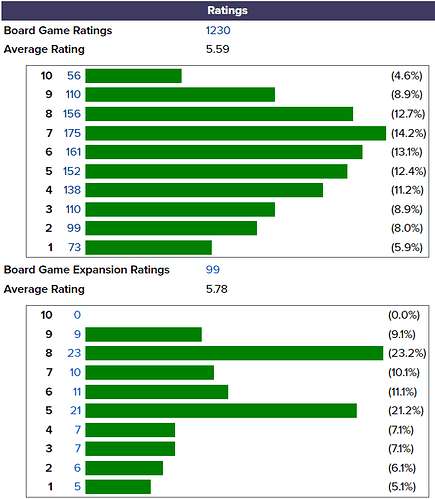 A lot of the games I play are pretty swell, from my perspective. I’m still subconsciously gravitated on rating games higher than 5. Or maybe because I try to play games I know I will like?

Also, it’s interesting to see how we all have normal distribution. As nature intended.

Absolutely this.
My joke is that my rating scale is a very, very good example of Confirmation Bias, since it’s I have so many highly reviewed games (or so many games I have highly rated, I suppose).