What are the things I always say?

We got a proposal this week that we do a t-shirt for the podcast.

It was proposed that we have some of the Things We Always Say on the front and “Onward!” on the back.

Which is fine for Roger (“Why don’t we do this in GURPS?”) but I have a much less formed idea of the Things I Always Say.

Can our listeners think of any of the things I’ve said more than once?

Other things that Roger always says are also welcome.

Speaking of tee-shirts here’s a celebration of our first five years that I didn’t get around to putting forward for market.

I like the way the program has produced line drawings out of pictures but perhaps the design could use a little more pizzazz. 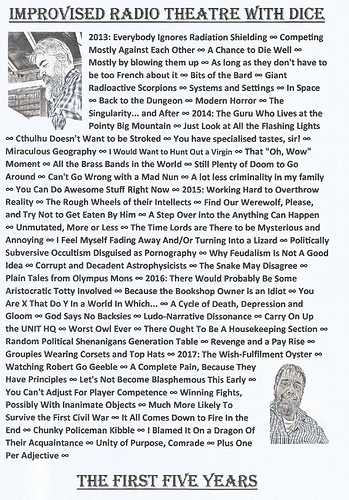 Delighted to see this! I suggested the idea on twitter and Lee Kindly relayed it. Huge fan of the podcast!

Part of the problem is that I’m not sure you have too many oft-repeated phrases, Michael. Take the following, for instance, which I think you’ve only used once:

“Nobody sane is the villain in his own mind”. I should probably say that more.

You have such a parochial definition of “sane,” Roger

Thinking about it I say:

“Give the players agency”

But only the second is anywhere near my own work.

Clearly some brave, brave soul needs to listen to the entire back catalogue and create a complete list of likely phrases.

Not volunteering, but happy to cheer and wave a flag.

What a vulgar old gentleman it is to be sure.

Perhaps this is the sign that you ought to put some work in on consistency of messaging. Consider your core competencies, your mission statement, choose three or four slogans each, and plug, plug, plug. That’s how the Koch bros. did it.

You know, the Koch brothers are not my idea of perfect citizens of the world polity. Also they’re a lot richer than I am.

Indeed not! But you have to say that no-one except perhaps Rupert Murdoch has made such a lasting impression on contemporary attitudes and the state of affairs. Despise their work, but learn from their technique!

A few months ago in Canberra, at brunch, a friend suggested a game that would have got us banned from RPG.net, and that involved whittling a little list down to six. My final list was “Rupert Murdoch, the Koch brothers, Putin, Erdogan, and the hammer on an empty chamber, for safety”.

A while back, someone on the SJ Games forums was talking about a possible scenario with a group of entirely hateful PCs. This turned into my Blood on the Sand (published for WaRP as Infection) – the PCs are an Arizona militia, and the CDC moves into town.

I have listened to a couple of old episodes. Roger often remarks that RP needs to develop a set of storytelling conventions of its own, He always runs things in GURPS unless there is a particular reason not to. And he complains that GURPS requires a player to understand the system well before they do the first thing: generate a character. Michael displays a distressingly consistent originality in his remarks.

Michael displays a distressingly consistent originality in his remarks.

Well there’s something to put on a t-shirt, if I ever heard one!