This is something slightly different from our usual sessions: we discuss in retrospect one of the games we’ve played, how well we think it worked (or didn’t), and how we might use it again.

1 - Accidentally Left Someone On the Moon: The Whartson Hall Gamers discuss The Cthulhu Hack.

2 - Not A Wonderbra: The Whartson Hall Gamers discuss Monsters and Magic.

4 - And I Don’t Have a Cat: The Whartson Hall Gamers discuss Forgotten Futures

5 - Shooting It Is The Worst Thing You Can Do: The Whartson Hall Gamers discuss the Cubicle 7 Doctor Who RPG

7 - Now You’re Locked Down In The Basement: The Whartson Hall Gamers discuss Call of Cthulhu

9: So I Let The Dice Fall Where They May…: The Whartson Hall Gamers discuss Tunnels and Trolls

10: Are You Putting Your Game Out Of Business?: The Whartson Hall Gamers discuss GURPS (part 1)

Session 11: Think Of Us As a Flange: The Whartson Hall Gamers discuss GURPS (part 2)

“A lot of our SAN loss is pre-paid these days. We have, after all, got used to space travel, chaos theory, nuclear weapons, genetic engineering and the Holocaust.”

And it’s nice to see the Dorothy Parker reference in the title.

We’ve recorded a few more of these, so we thought we might share them with you wonderful people.

2 - Not A Wonderbra: The Whartson Hall Gamers discuss Monsters and Magic.

Jon runs us through an adventure in Sarah Newton’s Monsters & Magic. https://mindjammerpress.com/monstersandmagic/ Session 1 - The Donkey Lives: Go to the village, they said. Get a barrel of grog, they said. How hard can it be? Session 2 - Strolling Purposefully: We make progress. No, really, we do. The GM said so. Session 3 - I’ve Met Mobs Before: In town, but distracted by a side issue (not to mention one of us being unsure which side to support). Se…

I really enjoyed this discussion. Please keep sharing these episodes!

Hearing your reactions to Sarah Newton smooshing together old school and modern RPG aesthetics, made me consider which rules - old or modern - actually enhance gameplay experience. James D’Amato was asked how he would describe a table-top RPG to someone who had never encountered one before. I liked his answer: “I would describe it as structured collaborative storytelling. The sort of thing that, if I said ‘hey we’re going to tell a story together’ and that intimidates you, don’t worry; there are rules to follow so you don’t mess it up.” To me, that focus on a rule as a kind of safety net is a good way of evaluating its usefulness.

Looking forward to a discussion of Genesys sometime in the future…

Looking forward to a discussion of Genesys sometime in the future…

You may not have to wait very long…

You may not have to wait very long… 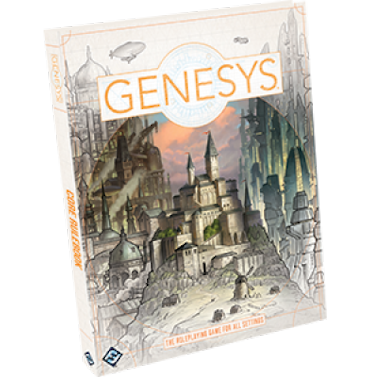 Good discussion of Genesys. I have wanted to try it out using Rura-Tonga as I think the Star Wars roots fit it well into that Indiana Jones space.

I have run this as Star Wars but not as genesys.

Part of the appeal is that advantage and disadvantage add flavor to success and failure for a genre where success and failure in discrete moments is not always particularly compelling. Like we know Indy isn’t going to die on the tank, we know Indy isn’t going to destroy the tank neatly in a well crafted ambush. We want to see what hilarious nonsense happens while Indy deals with discrete tank-related problems until we figure its time to move on to Not-Petra.

To Mark’s comments I think part of the appeal of Genesys is that it builds this mindset back into character creation rather than tacking it on in the resolution mechanic alone. Also building it into the equipment rules adds to that feeling of a completeness here lacking in tacking a Y axis on by fiat.

My complaint with Genesys is the instances of zero success or failure. This seems like the stall speed of the system. As long as there is either one success or one failure to hang all the advantage and disadvantage around you can keep flying. When neither of those is present it falls entirely on the group at the table to keep things going and I don’t like the feeling that the system is shrugging and giving up in that moment.

In a couple of weeks I’m going to try it with a different group, so we’ll see how effective an evangelist I am.

Session 4 - And I Don’t Have a Cat: The Whartson Hall Gamers discuss Forgotten Futures

On the Genesys front I noticed that a new setting book is on the preorder lists for some shops. 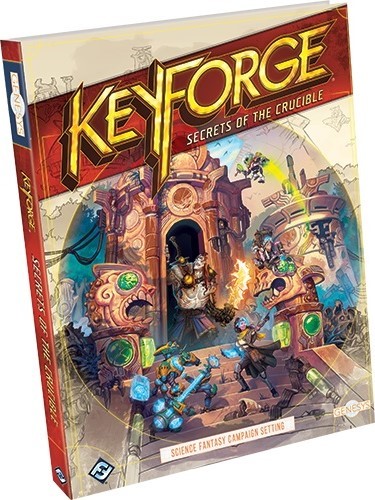 The description makes it sound like an existing setting, possibly a licenced one, although nothing I’m familiar with. Whether this was expected or indicates that the game line will continue I also don’t know.

Keyforge is Richard Garfield’s latest way of separating suckers from their money, a card game in which not only are you buying a pig in a poke but every deck is unique. (Balance? If it wins often enough, it can’t be played in tournaments any more.)

The theme is a generic fantasy gallimaufry with added aliens, demons, scientists, and other weird and abnormal creatures. There’s about as much here to role-play here as there is in Magic: the Gathering.

To be fair, some people have more positive feelings about it than I do.

I’m just listening to the Genesys episode and I was glad to hear you spend so much time focusing on the dice. I tend to reflexively dislike any RPG that makes me buy specialized dice. I already have dice. I have a lot of dice. One of the reasons I play RPGs is to justify all the dice I’ve purchased. When I see a game with its own dice, I put a protective hand on my wallet.

And of course it’s Fantasy Flight Games. I live in the Twin Cities (yes, Minneapolis police really are that bad and have been since the department was founded) and a friend of mine works in development for Fantasy Flight. I’ve been a playtester on several of their games. The overriding impression I have always had about them is not that they’re capitalists in the sense of wanting to make a reasonable return on a good product, but rather capitalists in sense of selling you a hell of a lot of sizzle and a minimum amount of steak. My experience with them has been limited to board games, but every board game I’ve played or playtested has had amazing production values and badly flawed mechanics that ruin the experience for me. It’s hardly surprising that they do the same for RPGs.

I sort of make an exception for Fudge because it’s easy enough to swap in proper six-siders. Fudge dice are an extra, not a necessity. You don’t need a chart to explain what’s what.

The reason I stopped playtesting FFG games is that every single game I tested, I found at least one major mechanical problem and quickly identified a simple fix. I was told that A) that was indeed a problem, B) other playtest groups were saying the same thing, and C) they weren’t going to fix it – or rather, they would fix it in an expansion. It was an immensely frustrating experience.

5 - Shooting It Is The Worst Thing You Can Do: The Whartson Hall Gamers discuss the Cubicle 7 Doctor Who RPG

I’m just catching up with this show, and I can confirm that Primeval does in fact use the Vortex System, as does Rocket Age, which is no longer published by Cubicle 7. Primeval doesn’t use the Talkers-Movers-Doers-Fighters initiative order, but interestingly Rocket Age, despite being a pulp adventure setting, does.

I also find myself wondering how you guys would enjoy something like Trinity Continuum or Chronicles of Darkness 2nd edition, where you set personal goals for your character and get experience when you meet those goals.

I’ve lost track of which WoD is which, but I’m playing a Vampire 5th game at the moment…

No idea if Vampire 5th does anything similar.

I’ve never had the best experiences with White Wolf stuff. Adventure! didn’t grab me and the Elizabethan Mage game I played for a while constantly felt as though it would have been fantastic under any of half a dozen different systems, really anything other than the one it was saddled with.

Mostly though, aside from the uninspiring mechanics, none of the games truly struck me as fun to play.