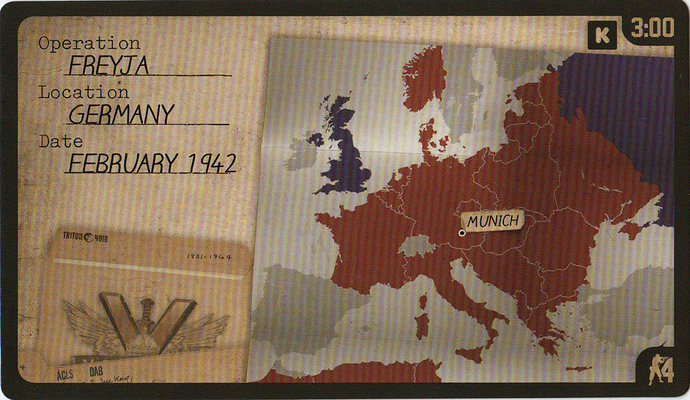 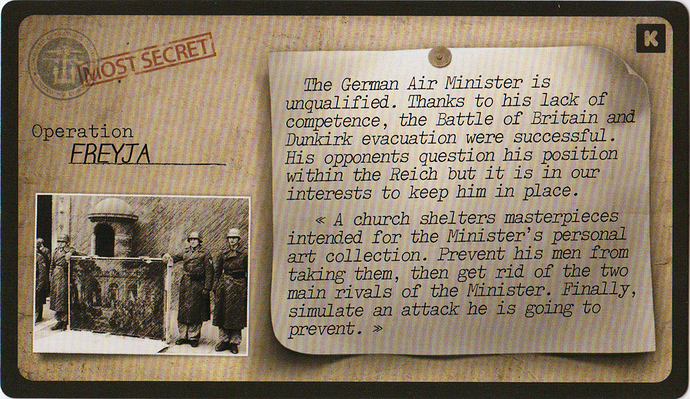 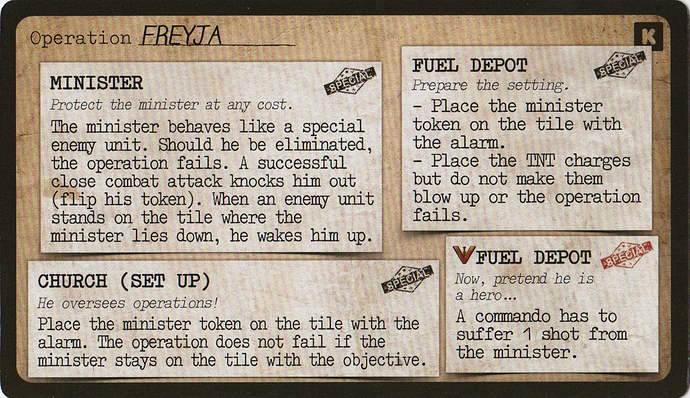 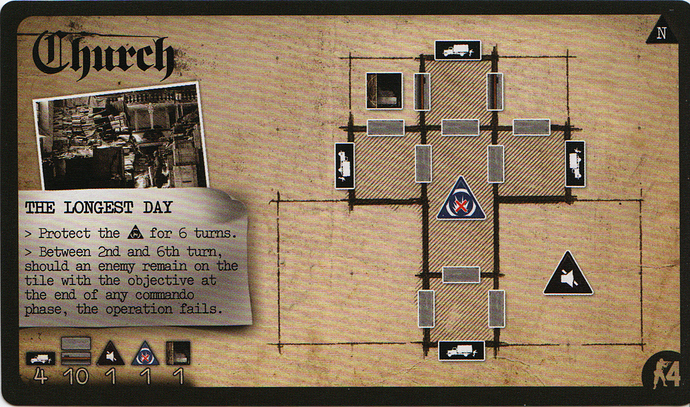 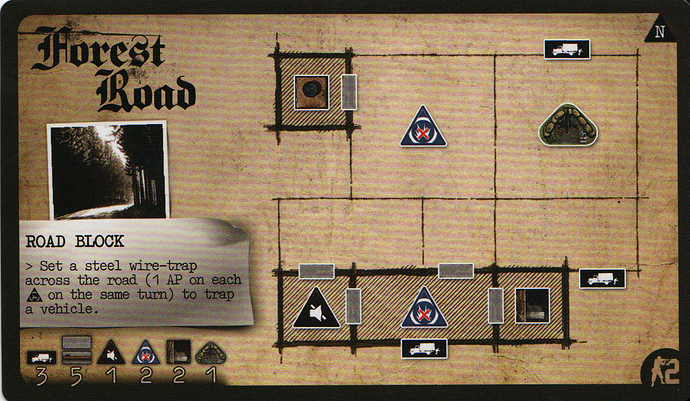 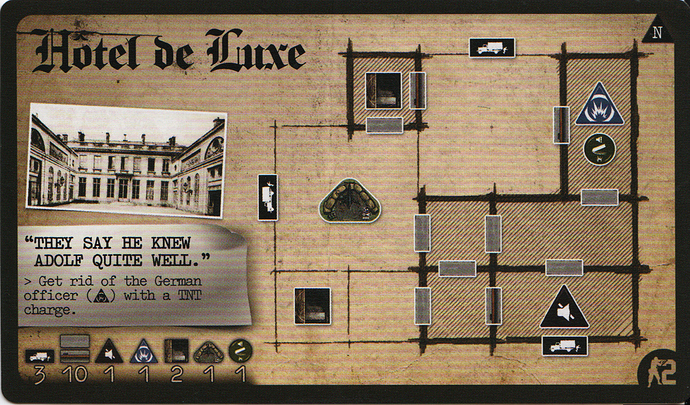 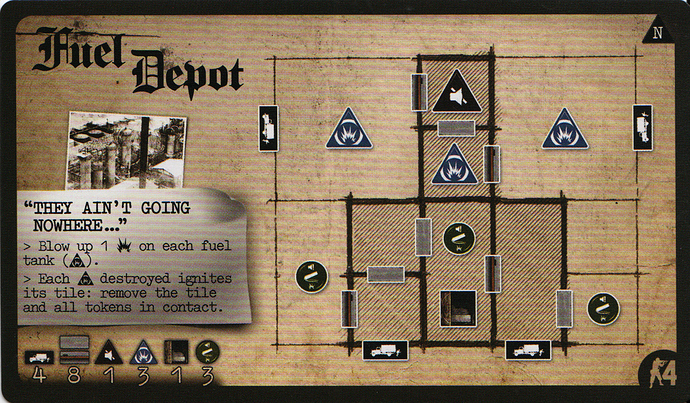 As before, four for us to play, one more as the backup. 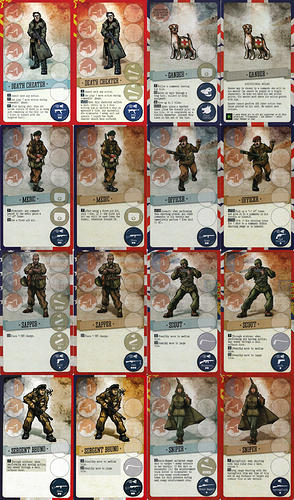 I would ideally like to see at least two silenced Stens in play and I’m happy to take one myself. (I don’t think I ever fired my own weapon as Death Cheater in the last game.)

I should have said, by the way, that if anyone else is watching and wants to jump in, feel free.

While I do enjoy the playing I have a busy week ahead of me. So I’ll turn my spot if there is somebody who wants it, otherwise I’ll take it (Harry again) with that caveat.

Sounds fun. Nothing like protecting the honour and the job of a drug-crazed Nazi transvestite. I’ll take the browny/gold/orange officer, with the pistol. Officer Ossifer, reporting for duty.

Delay caused by finding and scanning the “Minister” target counter. 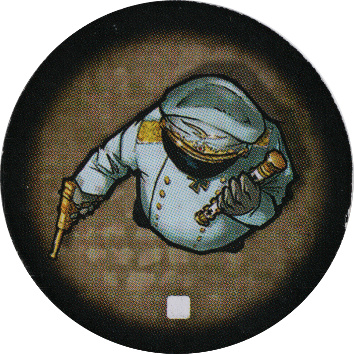 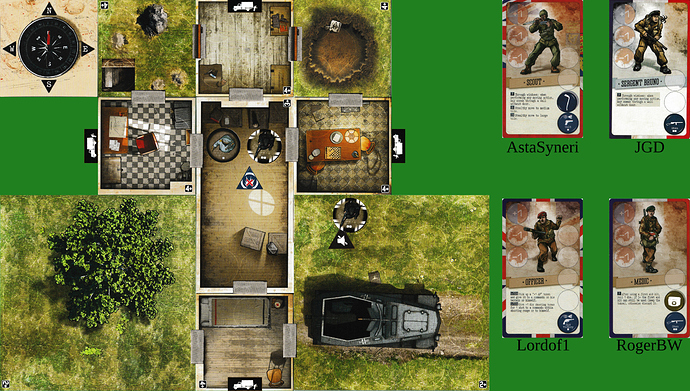 On this terrain, we need to keep him alive, but not necessarily with us (or conscious). I wonder whether it might be worth dropping him unconscious in one of the top corners, to minimise the chance of another enemy finding him. 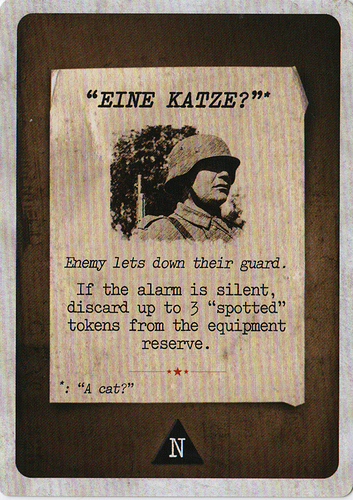 So basically we need to defend the minister for six rounds and then go on the to the next map? I am not sure about our objective here…

In each of turns 2-6, we need to end the commando phase with no enemies (except possibly the minister) in the central tile.

The obvious way to do that, I think, is to cluster on the central tile and shoot the enemies as they appear. But at least one per turn will spawn and move directly in, thus potentially spotting and shooting us.

A less obvious way is to cluster in a small tile (as it might be the western one, allowing us a quick escape on turn 7), jamming up that entrance, and shoot the enemies when they come into the central tile from the other entrances. (Though I think that isn’t quite perfect; when the first commando moves out, one enemy pops in, and gets a visibility check against the other three, etc.)

Hmmm perhaps the sniper would have been a better choice here, but I can donate AP to people with bigger guns. Central seems better to me.

This is a silly mission. There’s no point in worrying about the alarm, it will be going off soon. We’ll need to pick up better weapons for the scout and the officer. I think the central plan is the best bet.

I think to start with Bruno and the medic spend most of their time shooting, while the others grab gear as it becomes available. Anyway, do we have first turn actions?

For the medic: up, south, shoot east. Shall we jam up the western entry room for turn 1?

Yes, let’s fill that room. See if your shot got that German, so I know if I need to shoot him.

That’s got him, did he drop anything? 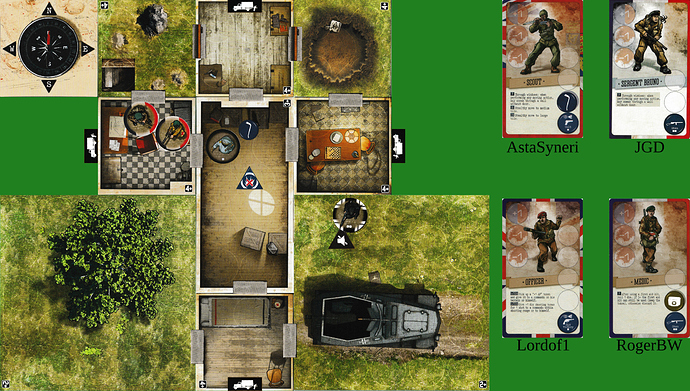 @Lordof1 and @AstaSyneri, I suspect your moves are up, south, save…?

Spot on from me, up south save.