As before, I’ll try and keep a running commentary on the game going from my own perspective. Anyone playing on the forum side should stay out of here until the game is over. Non-players are free to comment and ask questions.

The setup has been posted to RossM.

Haven’t had time to do this, but now that I’m thinking about my next play I can write down some thoughts for my own reference. Easier than thinking right now, after one of my kids had a tantrum.

Good for me, very unusual headline for them. From this, I would conclude they don’t have anything better, which probably rules out:
CNS, Red Scare (unless short on OPs), Nasser, Arab-Israeli War, Decol (unless scared of Defectors), Fidel, Cambridge Five (unless they hold 2 scorings), Vietnam Revolts, De Gaulle, SocGov, Suez Crisis.

Sensible play, puts pressure on me to defend two places I obviously don’t want to put more influence into.

Puts it back out of reach, leaves it unclear whether I’m afraid of Blockade or creating a Truman trap.

Well, that means they might actually be short on OPs, I guess, or maybe paranoid about Defectors. Either way, a good indication I should expect the unexpected. Great result though, gives me some breathing room.

I hate the next decision so much. After all these years I still don’t know whether repairing the damage, going into Pakistan, Afghanistan, Iraq, Lebanon, or Malaysia is the right play. I think it hinges on how many OPs I can put into one AR. Like, 3 or 4 OPs into multiple locations would probably be best, but what about only 1 or 2?

Too tired and stressed to give the move the attention it deserves right now. 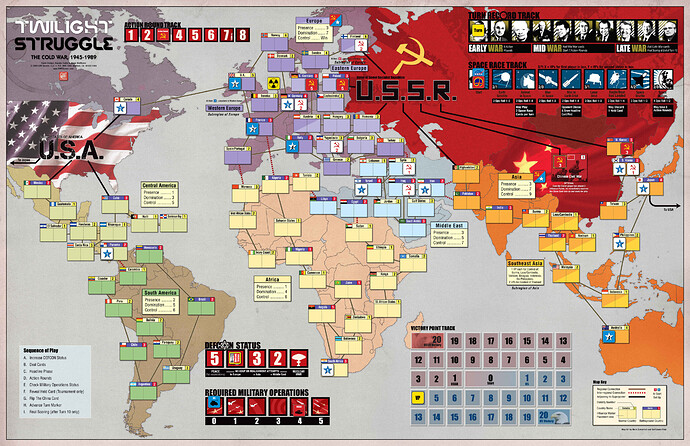 If my assumption about the lack of good headlines is correct, then there’s no immediate danger of Vietnam Revolts or Decolonisation. Though the latter is still a possibility if the opposition is paranoid about Defectors, or wants to wait for defcon 2 (bad idea to headline Comecon just for that, imo). That means I might be OK holding off Malaysia for a beat, and probably should while it’s still defcon 4.

I do want to repair Iran, and one more influence is difficult to place right now. Afghanistan is a wishy-washy defensive option, perhaps a waste of an OP, but I still marginally prefer it to a point in Iraq since ME has been scored. 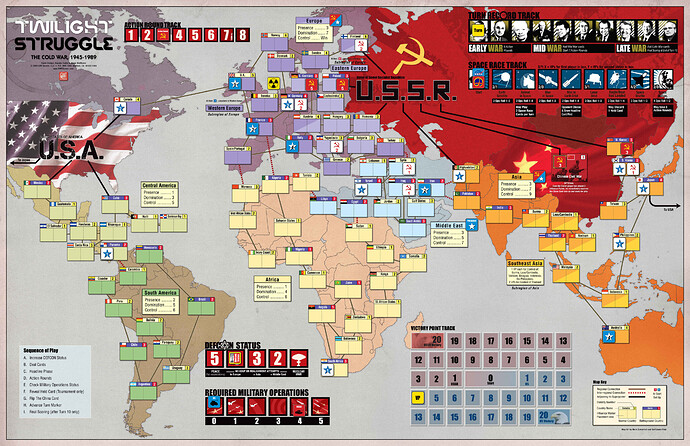 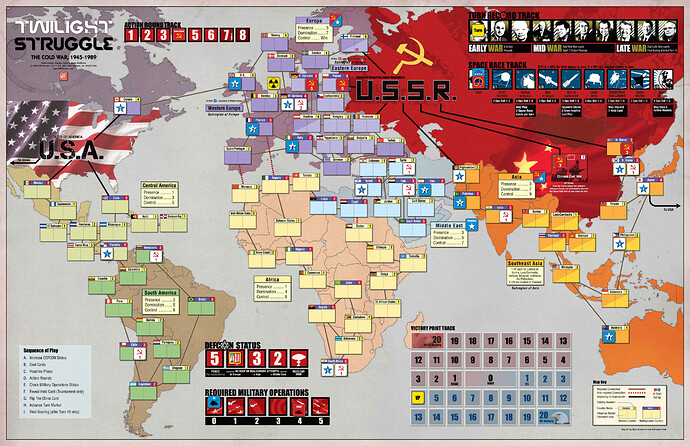 lol, they dropped DeStal on me, really early. This makes me rethink: now I suspect they have a surfeit of amazing cards, maybe Decol and/or Vietnam too, and were just too cagey about the possibility of Defectors in the headline.

Oh well, nothing for it but to fill Pakistan with Defectors and see what hits me next. 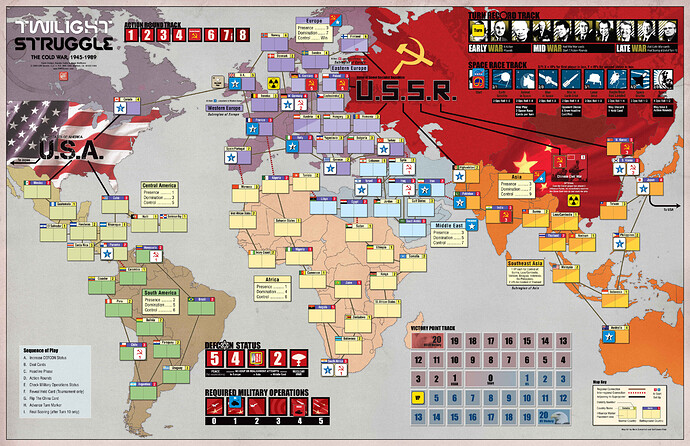 Giving the US Marshall Plan doesn’t seem like a great idea to me, but that’s what they did. Filling India and S. Korea is sensible, but Europe is now safe for the US and the USSR will never dominate it. Asia looks really shaky, but I just don’t have the OPs to do anything about that.

So I’m in a bind. Need to lower defcon or I’ll be hit with a massive VP penalty, and protecting Pakistan also seems worthwhile. Would like to coup Venezuela, but also prefer to hold onto Truman, and that means playing Nasser. So I did, and got lucky with a roll of 5.